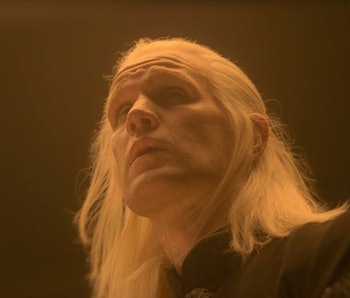 In the season finale of House of the Dragon, “The Black Queen,” the lines separating sides are officially drawn. At Dragonstone, Princess Rhaenyra (Emma D’Arcy) is named Queen in opposition to Queen Alicent (Olivia Cooke) and her son, the newly-crowned King Aegon II (Tom Glynn-Carney).

While Rhaenyra’s Blacks lack the sizable army of Alicent’s Greens, Rhaenyra has a fleet of dragons. As Rhaenyra is reminded by one of her bannermen, “Your cause owns a power that has not been seen in this world since the days of Old Valyria.”

Rhaenyra doesn’t have exclusive control over all the dragons in Westeros, as the Greens have three adults. But the calculating Daemon (Matt Smith) knows the score. He names several dragons in their keep — “Syrax, Caraxes, and Meleys,” as well as the “unclaimed dragons” of Seasmoke in Driftmark and Vermithor and Silverwing who “dwell on the Dragonmont.” All, apparently, are “riderless.”

While dragons are dispatched with riders to cement loyalty from other houses — including, fatefully, Prince Lucerys on Arrax to Storm’s End — Daemon visits the Dragonmont to obtain a new dragon for the cause.

As Daemon inches closer to the beast, he sings an enchanting song in High Valyrian. The dragon eventually reveals itself to be Vermithor, also known as the “Bronze Fury.” The show’s official Twitter account confirms this, just in case there was any confusion.

The scene is the last we see of both Vermithor and Daemon in Season 1. It’ll be a while before we see either of them again, as Season 2 of House of the Dragon doesn’t begin filming until summer 2023. But the scene does leave fans with a few thoughts to nibble on before the show’s return. Not only have we seen the start of the Dance of the Dragons, but a link to a time before House of the Dragon started.

Who is Vermithor? Meet the Bronze Dragon of Fury

Vermithor was first described in George R.R. Martin’s 2013 novella The Princess and the Queen as a bronze dragon with “great tan wings.” One of the largest dragons in Westeros’ recorded history, it’s outsized only by Balerion and Vhagar.

Vermithor is already about a century old by the time the Dance of the Dragons begins. Previously owned by King Jaehaerys Targaryen, grandfather to Viserys I (Paddy Considine) and Daemon, Vermithor was left without a rider when Jaehaerys passed.

In Martin’s books, Vermithor accepted a blacksmith named Hugh Hammer, who rode Vermithor into battle. The HBO series could be making a huge change to that story, as it seems Daemon is intent on controlling Vermithor himself. While we don’t actually see Vermithor bend his neck for Daemon, an important shot of Daemon’s eye meeting Vermithor’s signals that a connection is made.

Why Does Daemon sing to Vermithor?

Singing to a dragon might seem strange, but there are a few implied purposes.

First, King Jaeherys was renowned throughout the realm as a wise man. He was described in Martin’s books as “fair-spoken, open-handed, and as chivalrous as he was courageous,” and as “learned as a maester and pious as a septon.”

Being so learned, it’s safe to assume Jaeherys knew a few songs, and how to use them to soothe his dragons. It’s a trick Daemon might have picked up throughout his time spent with his dear old granddad.

Singing might also be an effective way to communicate with dragons, especially riderless ones like Vermithor. The Bronze Dragon needs social readjustment, so Daemon is presumably singing to make it clear that he’s not an enemy.

And with a conflict upon us in House of the Dragon, friends are in short supply.

House of the Dragon Season 1 is now streaming on HBO Max.