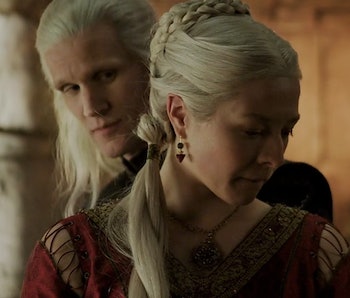 Let’s face it, the Seven Kingdoms is rarely a place of harmony and happiness and if you’re a Hand of the King or dutiful wife of a royal heir your hourglass sand is always running thin. The first drops of blood have been spilled on the road to Targaryen civil strife and nothing can halt it. We have a feeling King’s Landing will only get more dangerous in House of the Dragon Episode 7.

Ahead of Sunday’s new episode, here’s everything we know about House of the Dragon Episode 7, from release time to plot and more. But before we delve into the epic dynastic drama, first this…

What happened in House of the Dragon Episode 6?

Last week in “The Princess and the Queen” we endured a jarring time-shift and recasting of major characters as we jumped forward ten years to find Rhaenyra (now coldly played by Emma D’Arcy) with a brood of brown-haired bastards fathered by Ser Harwin Strong (Ryan Corr).

The rift between the Princess and Queen Alicent (portrayed by Olivia Cooke) is growing exponentially with each illegitimate newborn. Alicent’s elder sons with King Viserys are now unruly Targaryen hellions as they impose their will on Rhaenyra’s weaker kids. But the princess’ indiscretions are well known, especially when her spurned lover, Ser Criston Cole, calls out Ser Harwin for secretly sticking up for his children.

Elsewhere in Pentos, Prince Daemon has spawned his own family after marrying Laena Velaryon and siring twin daughters with a third child on the way. However, in a scene mirroring his brother’s wife’s tragic breached birth years earlier, Daemon sees his wife taken her own life by dragon fire after delivery complications doom both her and the baby.

Meanwhile, Lord Lyonel Strong whisks his son Harwin back to Harrenhal, but that homecoming is short-lived when fire breaks out and roasts them all courtesy of Larys Strong’s (Matthew Needham) treachery.

Now that Rhaenyra, Laenor, and their tribe have made an exodus to Dragonstone and King Viserys is without a Hand of the King, will this be an opening for the return of Otto Hightower, the revenge of Prince Daemon, and further machinations by “Clubfoot” Larys?

With knives being drawn and civil strife stirring, let’s slice into the next episode titled, “Driftmark.”

When is House of the Dragon Episode 7’s release date?

House of the Dragon Episode 7 swoops in exclusively on HBO on October 2.

What is House of the Dragon Episode 7’s release time?

HBO bestows weekly episodes of House of the Dragon at 9 p.m ET/PT.

How many episodes of House of the Dragon are left?

House of the Dragon Season 1 will be defined by ten episodes total. After this week’s new calamities, there will be three episodes yet to ingest.

What is the plot of House of the Dragon Episode 7?

From the post-credits preview, we’ll be mourning Laena’s passing with a funeral at Driftmark as everyone gathers to honor her life. Someone steals Laena’s dragon (what silver-haired boy wants his own dragon?), Rhaenyra’s bastards are attacked, and Alicent wields her husband’s dagger.

With Daemon’s wife gone and Rhaenyra’s baby daddy cooked at Harrenhal, this does leave the door ajar for Daemon to take advantage of the situation should something befall Laenor Velaryon...

Sides are being formed following the bloody events last week and we can hear the Dance of the Dragons on the horizon. King Viserys is definitely not long for this world in his rapidly deteriorating state. How much longer can he hold out before the inevitable chaos erupts? And yes, Otto is back!

Who is in House of the Dragon’s cast?

Is there a trailer for House of the Dragon Episode 7?

Yes, HBO presented a new teaser trailer for Episode 7, “Driftmark,” with a somber burial at sea for Laena, Vhagar being abducted in the night, daggers being deployed, debts to be paid, opposing sides defined, and the return of Otto Hightower sporting his golden Hand of the King pin.

Will House of the Dragon get a Season 2?

With more material to address from the 2018 source novel, “Fire & Blood,” series creators Ryan Condal and George R.R. Martin are hoping to keep House of the Dragon’s train rolling for up to four seasons if all goes according to plan and the ratings stay high.