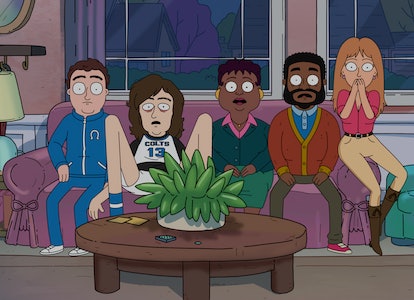 Before Netflix officially canceled Hoops (the basketball-themed animation series from Ben Hoffman, Phil Lord, and Chris Miller), a few of the key talent involved in the program sat down with Inverse for a raucous chat.

One key moment found actors Ron Funches, who played assistant coach Ron; Cleo King, who played Opal Lowry; the principal at Lenwood High; and Natasha Leggero, who played Shannon, the estranged wife of Coach Ben Hopkins (Jake Johnson), all pitching their favorite shows for a potential Netflix crossover episode that would have, hypothetically, featured their characters.

"I'd probably just put myself in BoJack Horseman because that seems very familiar to me," Funches tells Inverse. "Just walking around Los Angeles hanging out, doing stuff. And then I would just try not to fall into the same traps that BoJack has fallen into and just hang out with Mr. Peanut Butter all the time because Paul F. Thompkins is just a fun hang whether he's animated or in real life."

One could easily imagine the calamity that would ensue upon a Ron and Mr. Peanut Butter meet-cute. One thing is definitely for certain, the celebrity pup would run some meta-commentary about the whole thing. "It's Ron from Hoops!"

Cleo King's choice would take Principal Opal out of her animated confines to explore the brooding world of Lemony Snicket's A Series of Unfortunate Events. "It would be my character — I know, self-obsessed, but it's all good, though — Mrs. Poe. I played Mrs. Poe on that show. I would do Principal Opal meets Mrs. Poe and then they would be together as one."

That definitely sounds like a fun idea until you start piecing together the quantum mechanics that could make such a thing actually happen. Just imagine suddenly met your animated self, who popped in from a completely different reality, and were forced to be "together as one" with this alternate timeline version of you. Sounds more like an episode of Black Mirror, if you ask us.

"I guess I could be in Big Mouth but I would be someone's loser parent as Shannon," Leggero adds. "That would be fun."

You know, that honestly would be fun. And considering the fact that each of these ideas keeps things within the Netflix eco-system, one can only assume that there's at least a slight probability any of these switch-ups could actually happen.

The streamer's proclivity for re-using actors on other projects — as well as the boom of animated projects during Covid — leaves us pretty hopeful about seeing (or hearing) Funches, King, and Leggero in more animated goodness, soon.