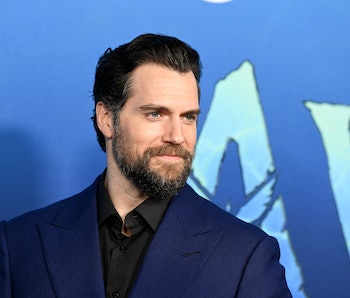 Henry Cavill isn’t your average movie star. He brought Geralt of Rivia to life in The Witcher partly because it’s a perfectly cast role, but also because he just really, really, loves The Witcher. The Superman actor once posted a five-minute-long video of himself building a gaming PC in a tank top, and he’s always been keen to talk about Warhammer 40000, a miniature wargame; the man is just really nerdy.

After a tumultuous week following an even more tumultuous few months, it looked like Cavill had gone from two huge jobs to zero, but it was all for the best: His dream job just fell in his lap.

To recap the wild time the actor has experienced: his return as Superman in the DC Universe was teased in Black Adam’s mid-credits scene. Then, about a week later, he announced he would leave his role as Geralt of Rivia in The Witcher. (The role was later recast with Liam Hemsworth.) At the time, fans assumed it was so he could focus on Superman. This week, newly minted co-president of DC Studios James Gunn announced the DC Universe would focus on an earlier part of Superman’s life, and Henry Cavill will not return to the role.

It’s enough drama to fill up a movie of its own — but there’s still more. Variety confirmed that despite Cavill’s suddenly free schedule, Season 4 of The Witcher is continuing as planned with Liam Hemsworth.

But when Netflix closes a door, Amazon opens a window. Today, The Hollywood Reporter revealed Cavill is attached to star in and executive produce a series adaptation of Warhammer 40000 for Amazon Studios. “I have loved Warhammer since I was a boy, making this moment truly special for me. The opportunity to shepherd this cinematic universe from its inception is quite the honour and the responsibility,” said Cavill. He’s not lying: he told IGN last year that he would love to bring the game to life but would have trouble only playing one character.

It’s basically a best-case scenario for Cavill. He was passionate about Superman and he was passionate about Geralt, but it seems issues with creative leadership drove him away from those roles in one way or another. Now, he’s in a position to drive a new franchise and be an EP along the way.

Cavill has spent the past years building clout and a great reputation even in his lesser-known roles like in Enola Holmes or Mission Impossible: Fallout. He’s enjoyed the benefits of that by bringing some of the greatest genre franchises to life, but now he’s got the chance of a lifetime: to show a whole new fandom to those who might be intimidated by miniature tabletop sci-fi wargames.

Henry Cavill is the perfect example of a movie star prioritizing having fun more than usual, and a Warhammer series is basically as close to a perfect franchise project as possible. Regardless of how it performs, at least fans can rest assured he’s going to have a blast.