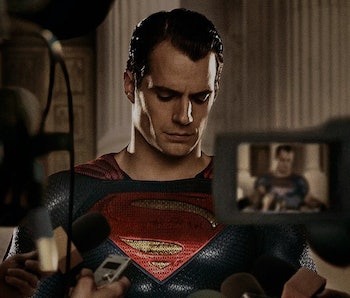 We told you what kind of charismatic popsicle Henry Cavill is on Instagram. On the night the news broke that Cavill may leave the role of Superman in the DC film franchise, Cavill responded on social media in the best, and undeniably weirdest, way possible.

On Wednesday, Cavill shared a video selfie on Instagram that is, frankly, impossible to describe without sounding a bit crazy. It’s a video of Cavill, wearing a “Krypton Lifting Team” t-shirt and playing Johann Strauss II’s “The Blue Danube” (performed by barking dogs) as Cavill silently raises and lowers a Superman figure still in the box.

Cavill’s only words are his written caption: “Today was exciting #Superman”

(The figure, by the way, was first seen a few months ago on Cavill’s Instagram when Cavill celebrated his Teen Choice Awards nomination.)

Just what in Rao is going on here? What’s Cavill telling us? Better yet: What is he not telling us? Does he not want to be Superman anymore? Does he love classical music when it’s performed by animals? Every possible answer is infinitely more interesting than whether or not Cavill is still playing Superman.

On Wednesday morning, The Hollywood Reporter cited anonymous sources at Warner Bros. claiming that Henry Cavill has left the role of Superman, a role he’s played since 2013’s Man of Steel and through movies like 2016’s Batman v Superman: Dawn of Justice and 2017’s Justice League. In place of Superman is a tentative movie featuring Supergirl.

Allegedly, negotiations broke down between Warner Bros. and Cavill’s camp over a cameo in next April’s Shazam! that cemented Cavill’s exit from the DC universe. A few hours later, Deadline reported that Michael B. Jordan is being considered for the role “down the road.”

Shortly after the news broke, Cavill’s agent Dany Garcia expressed that “the cape is still in his [Henry Cavill’s] closet” and that Warner Bros. “has been and continues to be our partners.” No, Garcia did not say “Henry Cavill is still Superman” explicitly, but it’s something — especially compared to the hilarious nonsense coming from the Man of Steel himself.