“This is a Superman story.” 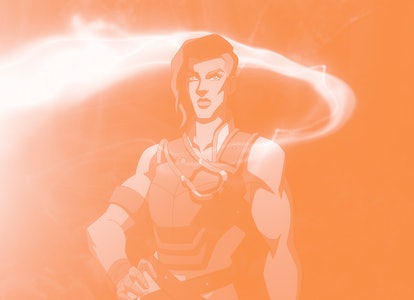 The power of He-Man is back on Netflix, though some aren’t feeling its mighty rush.

In a massive shift from the original series, the new series — from executive producer Kevin Smith — centers on female heroine Teela (voiced by Sarah Michelle Gellar). Meanwhile, Prince Adam (Chris Wood), the character who typically transforms into sword-wielding beefcake He-Man, is relegated to the sides when — well, something shocking happens.

Warning: Minor spoilers for Masters of the Universe: Revelation ahead.

In Masters of the Universe: Revelation, He-Man and his nemesis Skeletor (Mark Hamill) engage in a climactic battle that finally ends their rivalry but leaves the world of Eternia with a depleting supply of magic. Teela, a supporting character in the original He-Man cartoon series, takes center stage in Revelation as a lead protagonist seeking to restore magic in Eternia — and maybe bring back her friend, Prince Adam.

In both theory and execution, Revelation presents a compelling story. The show challenges its own conventions by significantly altering the franchise’s overarching status quo. And by immediately killing off the character everyone assumed the series would follow, Revelation proved anything could happen, raising the stakes of its story. Revelation may be a different show, but the series is absolutely the kind of epic saga nostalgic fans should expect He-Man to be.

But a small subsection of He-Man fans isn’t thrilled with Revelation. While the show has scored big with critics to earn a 94% “Fresh” rating on Rotten Tomatoes, the user review score is a toppled bucket of popcorn: a paltry 32%. As detailed by Yahoo, Variety, Uproxx, and ComicBook.com, fans are vexed the show is being “woke” in emphasizing Teela over He-Man.

In an interview with Inverse before the show’s premiere, Smith explained why he put Teela front and center: because she had untapped potential.

“When you watch the old show, it opens with [a monologue]: ‘I am Adam, Prince of Eternia.’ They’re very clear to point out only some people know the secret identity,” Smith tells Inverse.

“The one person wasn’t allowed to know was Teela. She’s literally in every episode, side-by-side with He-Man: fighting with him, if not protecting Adam,” adds Smith. “For me, I’m like, ‘What happens if you find out your best friend has been lying to you your whole life?’ Let’s have her find out in the worst way possible.”

Sarah Michelle Gellar, who voices Teela, believes Revelation to be a metaphor for growing up.

“You have that time you have to go out on your own without your support system and figure out who you are,” Gellar tells Inverse. “The only way to do that is on your own. That’s the journey [Teela’s] going on.”

The former Buffy star supports Smith’s thesis that Teela feels blindsided by the show’s big reveal about Adam. “She feels she’s been betrayed by the people she loves,” Gellar adds. “I think that’s a great ‘in’ for people to get into the story. Because it’s hard to feel like He-Man or Skeletor. [Teela] is someone who’s more accessible for the viewer.”

Smith believes he’s not “putting [Teela] any more forward than she was” in the original He-Man. “There’s a kernel of a story they had done in the old show that we wanted to take forward, about the relationship between Teela and the sorcerers,” Smith says. “Her story has equal might and nuance.”

Smith’s career, which began with his self-financed 1994 feature film Clerks, has been repeatedly defined by his passion for science-fiction movies and comic books. After his 1995 sophomore comedy Mallrats, Smith was briefly attached to write a canceled Superman movie, one which would have starred Nicholas Cage. Smith believes He-Man to be a prototypical superhero story within its own realm.

“I’m a comic-book guy,” Smith says. “What if Superman died and Lois found out that, all this time, Clark had been lying to her? That was my way in. This is a Superman story.”

While fans have been divided over the first five episodes of Revelation, the series’ second half is still ahead. Revelation has only premiered the first five of 10 total episodes, with the back half of its installments currently in post-production. On July 25, Smith confirmed that work is continuing on the series, and that the show’s orchestral score (by acclaimed film and TV composer Bear McCreary) was just recorded.

Until then, it’s anyone’s guess where the story of He-Man — and Teela — will go next.

Masters of the Universe: Revelation is streaming now on Netflix.