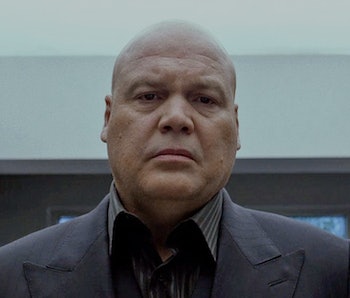 In many ways, the importance of Hawkeye seems fairly obvious. The upcoming Disney+ series is being sold as a possible farewell for Jeremy Renner’s Clint Barton/Hawkeye — one that will also introduce his replacement within the Marvel Cinematic Universe, via Hailee Steinfeld’s Kate Bishop.

Knowing that, it’d be fair to assume that the show’s sole purpose is to say goodbye to Clint and hello to Kate.

However, one of the most interesting (and exciting) rumors surrounding Hawkeye right now suggests that the series may also reintroduce certain characters and actors that Marvel fans have been waiting several years to see on-screen again.

A Fan-Favorite Crime Boss — As Hawkeye’s late November premiere date nears, the more rumors seem to grow that Vincent D’Onofrio’s Wilson Fisk a.k.a. Kingpin will appear in the Disney+ series. If true, the series would mark the first time that D’Onofrio has played the iconic Marvel Comics villain since the third season of Netflix’s Daredevil. An appearance would make him the first actor from one of Marvel’s Netflix shows (also see: Luke Cage, Jessica Jones, and Iron Fist) to appear in a Marvel Studios-produced MCU title.

For those reasons alone, the possibility of Kingpin showing up in Hawkeye is exciting, and that’s without even addressing the rumors that Charlie Cox’s Matt Murdock will also have a surprise role in Spider-Man: No Way Home.

As thrilling as the rumors of Fisk’s MCU return are — what are the chances that D’Onofrio actually will reprise his Daredevil role in Hawkeye?

Introducing Echo — The biggest reason why many believe (and have reported) that D’Onofrio’s Wilson Fisk will appear in Hawkeye is because of the show’s inclusion of a Marvel Comics character named Maya Lopez a.k.a. Echo. Played in the series by actress Alaqua Cox, Echo is shaping up to be one of the more interesting — and mysterious — characters in the Hawkeye ensemble.

In the comics, the character was a young deaf girl whose mob enforcer father was killed one day on Kingpin’s orders. Maya was subsequently taken in by Fisk, unaware that he was the one responsible for her father’s death. Similar to Taskmaster, she possessed the ability to perfectly mimic the physical movements of others, which made Fisk all the more impressed by her.

Maya’s relationship with Fisk splintered, however, after he sent her to kill Matt Murdock. Telling her that it was Murdock who killed her father, Maya attempted to avenge her father’s death by killing Matt — using his own movements and fight techniques against him in a battle that only ended after he managed to inform her of Fisk’s lies. In response to learning the truth, Maya shot Kingpin and went on to live a life of her own — one that saw her crossing paths and teaming up with characters and teams like Moon Knight and the New Avengers.

Both Wilson Fisk and Matt Murdock play major roles in Maya Lopez’s origin story in the comics. As a result, many comic book fans believe that Hawkeye will introduce Maya’s relationship with Fisk before going on to further explore it in the already announced Echo Disney+ series that Marvel is developing. At least, that’s what rumors and leaks have alleged in recent months.

D’Onofrio, who’s active on social media, has also liked several posts over the past few months calling for him to reprise the role and/or speculating that he will soon. That could, of course, just be the actor showing his appreciation for the continued fan support, though it could also be a hint of what’s to come. After all, having Matt Murdock show up in Spider-Man: No Way Home right around the same time that D’Onofrio’s Kingpin appears in Hawkeye would be a pretty stellar bit of narrative coordination on Marvel’s part.

In fact, that’d be the kind of trick that would not only please fans of the short-lived Marvel-Netflix series but also set up another Daredevil vs. Kingpin conflict in Echo.

The Inverse Verdict — With Hawkeye’s premiere still a few weeks away, it’s impossible to know with any real certainty if Vincent D’Onofrio will reprise his role as Wilson Fisk.

Echo’s presence in the upcoming Disney+ series does open the door for that to happen, though there’s nothing to stop Marvel from reimagining the character without Fisk. That’d be disappointing, but the studio has already made bigger changes to different comic book characters’ personalities and backstories in the past.

However, like Kang in Loki, there’s certainly room for Kingpin to appear in Hawkeye. All that remains to be seen is whether he actually does show up — or if Marvel fans are being led into the trap of another Mephisto Situation. Only time will tell.