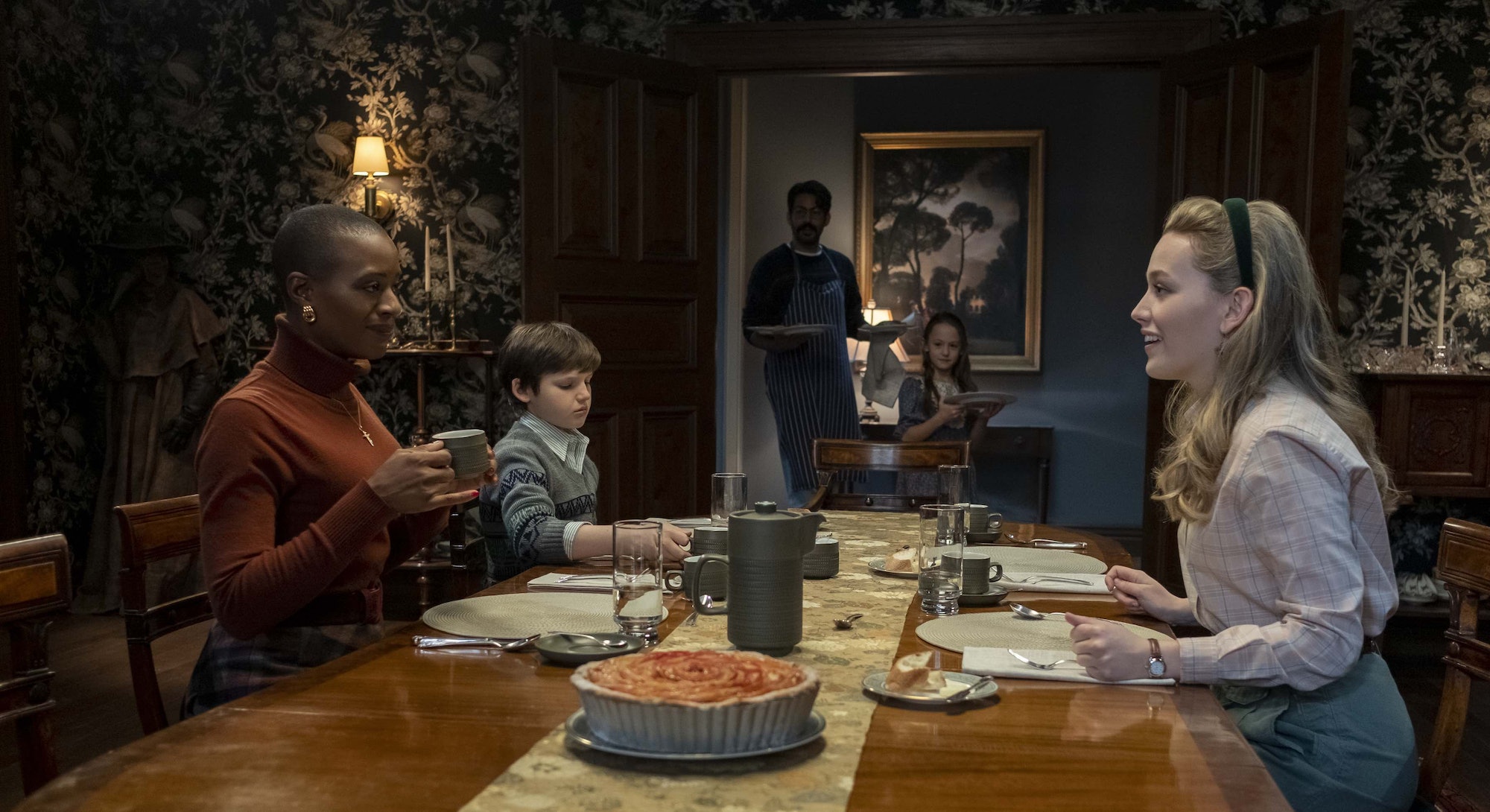 The Haunting of Bly Manor is presented as just another ghost story told around a fire.

The opening framing device of a story told the night before a wedding is an intriguing introduction, borrowed directly from the book that inspired horror maestro Mike Flanagan's new Netflix miniseries. In fact, Bly Manor borrows heavily from several works of author Henry James, but many of the most terrifying aspects of the series come from what's been changed.

Warning! Spoilers ahead for Netflix's The Haunting of Bly Manor.

The Turn of the Screw

The Turn of the Screw is a deeply ambiguous 1898 horror novella that's been adapted across various mediums dozens of times. It first appeared as a serial in Collier's Weekly magazine, with one chapter released per issue. This works well for adaptation into a television series — the chapters are already serialized with built-in cliffhangers. It's a wonder it took this long for someone to turn James' story into a TV show, even if Netflix's binge-friendly delivery system runs counter to the original telling.

The most obvious change comes in the settings of Bly Manor. While The Turn of the Screw took place in turn of the century England, Bly Manor is set almost a hundred years later, in 1987. However, this doesn't affect the narrative as much as you'd think. Aside from the protagonist arriving at Bly in a car (instead of a horse-pulled coach) and the goofy '80s fashions, this story is timeless.

In The Turn of the Screw, an unnamed governess takes a job looking after two children in a country manor, an adorable girl named Flora and a boy named Miles who was sent home from school under mysterious circumstances. The story moves at a leisurely pace, hinting throughout that Miles may not be who he seems — and that there may be an intruder to the manor in the form of Peter Quint, the old valet.

James uses florid language to bring the exquisite and grotesque manor to life, and the show's careful framing and production design replicates this. This is how the narrator of The Turn of the Screw describes the house:

Wasn’t it just a storybook over which I had fallen a-doze and a-dream? No; it was a big, ugly, antique, but convenient house, embodying a few features of a building still older, half replaced and half utilised, in which I had the fancy of our being almost as lost as a handful of passengers in a great drifting ship.

In the novella, her only companion in this huge manor is the housekeeper, Hannah Grose. The Netflix show elaborates on Mrs. Grose's background considerably, and adds two completely new characters to the domestic staff — Jamie the gardener and Owen the cook. They add levity and romance to Dani’s life, and two more vital perspectives on the appearances of Peter Quint.

One of the hallmarks of The Turn of the Screw is how little time it spends on the “ghost” part of its ghost story. There’s barely any explanation for what’s occurring, with only the unstable governess' unreliable account of the story. Is it all happening in her head? Is she obsessively protective of the children, or right to be afraid. Bly Manor takes a more maximalist interpretation of James' story by populating it with multiple ghosts.

Bly Manor pays homage to James' other works by making the unnamed governess an American expat. Many of James novels and stories feature a starry-eyed American protagonist attempting to fit with Britain's upper crust, and James himself was so besotted with Blighty that he renounced his American citizenship in 1915. Bly Manor carries on this tradition with Dani's fish-out-of-water experience and the search to start a new life that runs throughout the story.

"The Romance of Certain Old Clothes"

The origin story of the two Wingrave sisters in episode 8 of Bly Manor is lifted directly from an 1868 James short story, "The Romance of Certain Old Clothes." It follows two sisters who seek to marry. While one gets all the glory at first, she later falls ill and dies, allowing her sister to steal her life. But, because it's a ghost story, the dead have their revenge, in this case via an uncanny hand emerging from a trunk of old clothes.

While the Netflix adaptation is quite direct, there are some changes. The original story was set in Massachusetts, not England. The names of the sisters whose portraits hang in Bly Manor also differ from their source material. While the show depicts Perdita taking the place of her sister Viola after her death, in the book Perdita is the first wife, while her sister is named Rosalind.

All three of these names allude to Shakespearean heroines, but figuring out why exactly the name Viola is introduced is difficult. Viola, the protagonist of Shakespeare's Twelfth Night, spends most of the play disguised as a man. But in one soliloquy, she explains the way women tend to pine, much like Viola's long wait for her daughter to open the chest she inhabits:

She pined in thought, and with a green and yellow melancholy she sat like patience on a monument, smiling at grief. Was not this love indeed?

That passage, combined with the plot device of Viola's female clothes being kept in a trunk until the end of the play, sheds some light on the name change of the ghost of Bly Manor.

The ending of "The Romance of Certain Old Clothes" also provides inspiration for The Haunting of Bly Manor's one and only jumpscare. The story ends with Rosalind found choked to death in the attic in front of the trunk containing her late sister Perdita's clothes in the exact same manner as shown in Episode 8:

On her limbs was the stiffness of death, and on her face, in the fading light of the sun, the terror of something more than death. Her lips were parted in entreaty, in dismay, in agony; and on her blanched brow and cheeks there glowed the marks of ten hideous wounds from two vengeful ghostly hands.

Bly Manor uses this horrid tale to explain its own origins, making the world it inhabits feel totally developed and explained, quite the feat for a ghost story.

Then, there's the ending. While The Turn of the Screw begins with a narrator beginning to tell a story, it ends, abruptly, with the governess realizing Miles is being possessed. She tries to break him free, but in a flurry of prose, he faints, and the last few lines confirm the worst possible outcome:

I caught him, yes, I held him—it may be imagined with what a passion; but at the end of a minute I began to feel what it truly was that I held. We were alone with the quiet day, and his little heart, dispossessed, had stopped.

Miles dies at the end of James' novella, and it's not entirely clear if it's due to the ghost of Peter Quint or the governess' smothering overprotection of the boy. Bly Manor takes a different path and reveals the characters being told the story are actually the story's characters grown up.

The theme of memory is brought up multiple times in the series, with Flora and Mrs. Grose often getting "tucked away" into comforting memories. But when Flora and Miles grow up and move to America with their uncle, they completely forget all the ghostly events at Bly Manor. It's sad, yes, but it's also a comfort the children found a way to escape all the trauma.

The Haunting of Bly Manor uses the nuts and bolts built into its sources of inspiration for the technical haunting, but the scariness comes from the way the ghosts are presented. The fright is beyond just someone dead appearing alive, but someone who doesn't want to be forgotten making sure nobody else will be either.

The Haunting of Bly Manor is now streaming on Netflix.