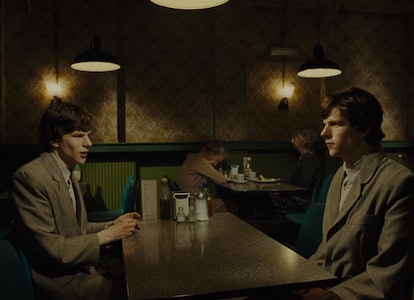 Nobody pays attention to Simon James (Jesse Eisenberg), the main character of The Double, director Richard Ayoade’s 2013 deadpan dystopian dark comedy. Simon sits on the train on his way to work, in a car completely devoid of other people, and yet when another man enters the car, he insists to Simon, “You’re in my place.”

Simon, unable to assert himself, gets up and moves.

The belittling treatment continues throughout Ayoade’s must-see film, streaming for free on multiple services from Crackle to Pluto TV and beyond. For instance, at work, a security guard requires Simon to produce two forms of ID to be admitted to the building, even though Simon has worked at the company for years. Simon’s boss, Mr. Papadopoulos (Wallace Shawn), keeps calling him Stanley and doesn’t seem aware of all the hard work he puts in. “Just started, eh?” Mr. Papadopoulos assumes. “Yes, sir, seven years ago,” Simon meekly agrees.

So it goes, as Simon churns out vaguely defined reports for the vaguely defined company, a familiar dystopian firm that provides some sort of valuable and inexplicable service to the world. The dingy, nightmarish office is full of meaningless buttons and dials and tubes, all of which the employees take very seriously. Simon dreams of being recognized by the company’s mythical chairman, known as the Colonel (James Fox), and he pines for his co-worker and neighbor Hannah (Mia Wasikowska), whose job consists solely of making photocopies.

Even Simon’s mother (Phyllis Somerville) barely acknowledges his existence. “Which one was you?” she asks after watching a cheesy TV commercial featuring employees of Simon’s company. That simple question cuts to the heart of Simon’s insecurities, and it takes on a literal quality when Simon arrives at work one day to discover his co-workers celebrating the arrival of new employee James Simon (also Eisenberg).

James looks exactly like Simon, but he has a confident, brash personality that draws people to him and allows him to get away with terrible behavior, including telling racist jokes and hitting on interns. Simon is so unobtrusive that at first, it doesn’t even occur to his co-workers that he and James look exactly alike. “No offense, man, but you’re pretty unnoticeable,” says a co-worker who refers to Simon as “a bit of a non-person.”

Eisenberg expertly differentiates the two characters, making them easy to tell apart even though they have the same hairstyle and wear the same outfits. Simon and James are not only two sides of the same character, but they’re also two sides of Eisenberg’s familiar onscreen persona, the awkward dweeb. Simon is the shy, frustrated version, the Eisenberg of movies like The Squid and the Whale and Adventureland. And James is the entitled, inconsiderate version, akin to Eisenberg villains like his Mark Zuckerberg in The Social Network and his Lex Luthor in Batman v Superman: Dawn of Justice.

Despite their apparent polar-opposite personalities, they’re able to easily pose as each other without anyone noticing, a fact that both of them attempt to take advantage of. James bullies Simon into taking the company aptitude test for him, and he then takes credit for Simon’s hard work on inscrutable reports. After Hannah breathlessly asks Simon to gauge James’ romantic interest in her, James offers to play Cyrano de Bergerac with Simon, allowing Simon to pose as James on a date with Hannah and project self-confidence via prompts from James.

Hannah is a sensitive, fragile artist, but neither Simon nor James truly sees her as a person; James is just more honest about it. Simon quietly nurses his crush on Hannah via spying on her with a telescope and rooting through her trash, while James is upfront about his desire to get her in bed. “I don’t know how to be myself,” Simon complains to James about his inability to talk to Hannah, and maybe what he really means is that he doesn’t know how to be James.

The initial friendship between the doppelgangers soon turns to competition, and then outright hostility. While the movie presents Simon as the “good” one, Ayoade and co-writer Avi Korine (working very loosely from a classic Fyodor Dostoevsky novella) never let Simon off the hook for his creepy behavior.

They also never lose sight of the humor inherent in the absurd situation, and there’s plenty of Terry Gilliam and Monty Python influence in the movie’s visual style and dry wit. Dostoevsky wrote about the tangle of 19th-century Russian Imperial bureaucracy, and while Ayoade’s film is set in an undetermined place and time, it clearly reflects the dehumanizing ridiculousness of governmental and corporate hierarchy.

The Double premiered at the 2013 Toronto International Film Festival alongside another doppelganger thriller, Denis Villeneuve’s Enemy starring Jake Gyllenhaal, and it may have been overshadowed by Villeneuve’s twisty, ponderous movie. While Villeneuve has become a genre heavyweight, directing major sci-fi movies like Arrival and Blade Runner 2049 and the upcoming Dune, Ayoade has returned to his roots as a comedic actor and hasn’t directed another feature since. But The Double is the more clever and playful of the two movies, which themselves form a sort of doppelganger pair. Enemy is consumed by its characters’ internal anguish, while The Double looks to the hilariously surreal society that produced them.

Simon and James are simultaneously victims and exploiters of that system, which indifferently grinds through anyone who doesn’t fit in perfectly. “We can barely cover the neighborhood,” says a cop whose sole job is to investigate suicides, after Simon’s neighbor jumps to his death. In such a harrowing, distorted world, being confronted by the funhouse-mirror version of yourself doesn’t even seem like a surprise.

The Double is streaming for free on Crackle, Pluto TV, Tubi, Vudu, and Hoopla in the U.S.

More like this
Culture
22 hours ago
You need to watch the most subversive sci-fi love story on Netflix before it leaves this week
By Alex Welch
Culture
6.28.2022 9:00 AM
8 sensational sci-fi shows and movies coming to HBO Max in July 2022
By Robin Bea
Culture
6.25.2022 10:30 AM
You need to watch the most inventive Bruce Willis time-travel movie before it leaves Netflix this week
By Eric Francisco
Related Tags
Share: