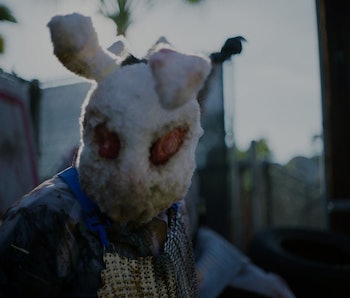 Even The Forever Purge has to end eventually. The latest entry in the action-horror series leaves things on an ambiguous note that may be a bit confusing. So what exactly happens at the end of Forever Purge? Here’s everything you need to know.

Warning! Spoilers for The Forever Purge ahead.

Most of Forever Purge takes place in the hours after the actual “Purge,” a 12-hour annual event where all crime is legal in this fictional version of America. The only problem? This time, the crime doesn’t stop when the Purge ends, plunging the United States into indefinite anarchy.

The movie follows a ragtag group trying to escape across the border into Mexico. Spoiler alert! They make it, but the Forever Purge is just getting started. As the credits roll, a broadcast news anchor reveals what happens next: The U.S. government falls against an army of white-supremacist Purgers, but good-hearted Americans also stand together and fight back in multicultural cities like New York.

Ultimately, it’s unclear which side will win.

Will there be another Purge movie?

Did someone say Purge 6?

The future of the franchise has never been less certain. Ahead of this movie’s release, Blumhouse Productions said it would mark the end of the Purge saga. However, in more recent interviews, it’s become clear that might not be the case.

Speaking to Dread Central, franchise-creator Jame DeMonaco said, “Between you and I, man, I really intended for [The Forever Purge] to be the last one up until 4 months ago when I woke up and had an idea for [The Purge] 6.”

“I had this idea… I can flip this thing upside down and we can continue this, maybe, in a way that people can enjoy… I’m actually outlining it right now in between these interviews! If the Movie Gods say, ‘People want to see it’ then we’ll do it. But I always leave it to the audience to tell us if they want more of it. But we’re ready! I have another one if they want it.”

Blumhouse CEO Jason Blum has also said he’s interested in continuing the series as long as DeMonaco is onboard. So assuming Forever Purge doesn't flop at the box office, we’ll probably get another sequel.

Does Forever Purge have a post-credits scene?

It does not. Like most movies in this franchise (and most horror in general), there’s nothing waiting for you after the end of The Forever Purge.

The Forever Purge is in theaters now.