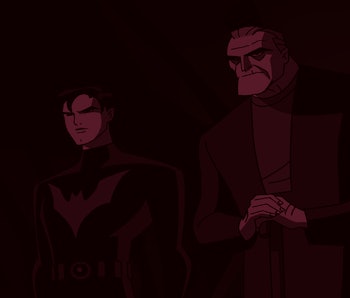 Batman may have everything come in black, but his hair comes in silver. In a new leaked set photo of the 2022 movie The Flash, actor Michael Keaton was seen on set in full makeup and costume as Bruce Wayne.

But what’s different about Keaton now than we last saw him as Batman 30 years ago is what’s on his dome: A full head of silver-white hair, indicating that Batman has not only embraced aging but is down with the silver fox look few men are brave enough to try.

Fans who know their Bat-history will also recognize in Keaton a familiar look that the DC Extended Universe is potentially paying homage to — or perhaps subtly introducing to this cinematic universe. Is this a reference to Bruce Wayne from the animated series Batman Beyond?

What Happened? — On June 20, leaked images from the set of The Flash appeared on social media; a number were shared on the Twitter page @BigScreenLeaks, with many more on Big Screen Leaks’ own website.

In addition to the first unofficial look at actress Sasha Calle as Supergirl (whose costume and hair indicates she will play Lara Lane Kent, the daughter of Superman and Lois Lane from the pages of DC’s Injustice comics), there was the first look at Michael Keaton back in his role of Batman/Bruce Wayne.

While The Flash director Andy Muschietti has already teased Keaton’s Batman suit, this leaked photo shows Keaton as Bruce Wayne in civilian clothing. And based on his appearance, Bruce has aged since we last saw him in 1992’s Batman Returns.

Hair of the Bat — What’s really interesting about Keaton’s look for The Flash is his hair. With a head of silver, Keaton now resembles the Bruce Wayne seen in the hit 1999-2001 animated series Batman Beyond.

A sequel to the animated Batman, the show chronicled 16-year-old Terry McGinnis, a Gotham City teenager in the year 2039 as he trains to become the new Batman under the guidance of an aged and retired Bruce Wayne. With its futuristic setting, the series took the mythology of Batman into sci-fi, which had renewed relevance at the start of the 21st century with the widespread adoption of the internet and movies like The Matrix.

A Batman Beyond movie with Michael Keaton in the role of an aged Bruce has been a popular idea among fans for years; a few viral tweets and fan art circulated since at least 2018. But with The Flash, it seems Warner Bros. and DC have taken notes with Keaton now actually looking like Bruce Wayne from Batman Beyond.

The Inverse Analysis — While a full-blown film adaptation of Batman Beyond was probably out of the equation, it is very cool to see The Flash mix and match elements from both the comics (Flashpoint and The Button appear to be significant touchstones) and DC TV, which has its own history and legacy in popularizing the DC Universe for a generation.

The adage “All roads lead to home” rings true to a degree, in that someday soon The Flash will stream on HBO Max alongside Batman Beyond. It’s almost as if a movie studio wants people to subscribe to its streaming service!

The Flash will race into theaters on November 4, 2022.

More like this
Entertainment
6.14.2022 4:50 PM
A Joker 2 musical would actually be great — here’s why
By Dais Johnston
Culture
6.20.2022 12:00 PM
25 years ago, the worst Batman movie ruined the franchise — and inspired a modern trend
By Dais Johnston
Entertainment
6.16.2022 11:30 AM
30 years ago, Tim Burton made the sexiest and most sinister superhero movie
By Mónica Marie Zorrilla
Related Tags
Share: