“Super-soldiers cannot be allowed to exist.” 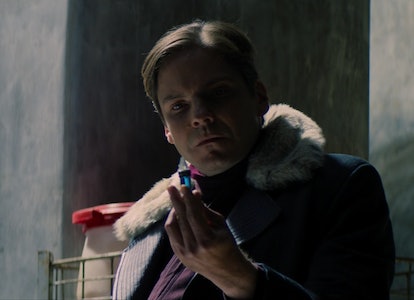 Baron Zemo has been one of the highlights of Marvel’s The Falcon and the Winter Soldier. The Disney+ series brought the Marvel villain back into the spotlight in its third episode and has since given new shades and dimensions (did you know Zemo can dance?) to a character who was already well-remembered and beloved by fans.

In fact, if The Falcon and the Winter Soldier has done nothing else, it’s done this: prove once and for all that Zemo is still the best villain in the history of the MCU.

What makes Zemo such an interesting villain is that he, in many ways, wants the exact opposite of what most Marvel villains want.

Unlike almost every other comic book antagonist, Zemo has no desire to obtain power or control the world. Instead, what Zemo wants, is to rid the world of the powerful people he believes hurt those less powerful than them. In his particular case, those powerful people happen to be superheroes.

In a way, Zemo’s motivation is similar to Thanos’, as both characters wish to solve a problem they perceive as hurting the world. However, where Thanos’ plans are inherently flawed and illogical, Zemo’s goals make actual sense. We’ve already seen plenty of instances in the MCU when the arrogance of superheroes has resulted in devastation around the world — Sokovia’s destruction being the key example — so we don’t need to try hard to understand what he means.

Zemo recognizes a real, legitimate danger that comes with the introduction of superheroes into the world. He understands the way they can lift up individuals who are not worthy of wielding as much power as they have and — as he argues in The Falcon and the Winter Soldier Episode 4 — promote the kind of supremacist ideals that already cause unbelievable damage and pain around the world. John Walker’s increasingly arrogant and brutal behavior as Captain America only gives further validity to Zemo’s beliefs.

Of course, what makes Zemo’s goals and beliefs even more compelling and powerful is that they make complete sense for his specific character to have.

A Man Without a Home

Zemo is an extremely well-drawn character. Aside from just being a believably smart villain and a skilled strategist, Zemo is someone with pain and anger that viewers can empathize with.

The knowledge of his losses, which include his entire family and his home country, allows us to easily understand his grief and desire for revenge. It makes sense Zemo carries such hatred for the Avengers, given their involvement in the deaths of his family and country.

I would even go so far as to say that the only other MCU villain who comes anywhere close to having as emotionally compelling a backstory is Michael B. Jordan’s Erik Killmonger, who similarly sits high in the rankings of MCU villains.

None of this is to say that Zemo isn’t a villain. The terrorist attacks he commits in Captain America: Civil War was atrocious, one that he should be punished for, and his inability to see the good that superheroes like Steve Rogers can do for the world results in the character having a compellingly limited perspective.

But those flaws and contradictions don’t detract from Zemo’s character — they just add even more shades to an already layered villain.

All of which is to say, Zemo’s the kind of character whose personality, beliefs, and decisions all seem to align perfectly at all times, and who has the ability to make you question the actions of the heroes you’re usually meant to blindly root for. Villains like Zemo don’t come around all that often, and we should enjoy him for the flavor he provides, like a well-timed Turkish delight.