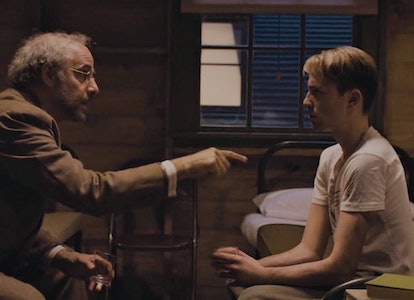 What was the secret ingredient in Dr. Erskine’s Super Soldier Serum? It’s established in the Marvel Cinematic Universe that, with the rare exception, all attempts to recreate the serum used on Steve Rogers (Chris Evans) have failed. (The serum featured in Falcon and the Winter Soldier is said to be a “refined” version of the formula originally perfected in the 1940s by Erskine.)

Most have chalked up the difficulty to Erskine having secret knowledge of the serum and its mechanics in a way that no other scientist has since been able to acquire — including Bruce Banner (Mark Ruffalo). But what if the success of the serum actually has to do with a secret ingredient Marvel fans will be very familiar with?

The Theory — A new Reddit post by u/DSG72__ speculates that the reason Erskine’s super-soldier serum was so pure and perfect was that the scientist used a distilled version of the Heart-Shaped Herb that the Wakandans give to whoever takes on the mantle of Black Panther.

The Redditor argues that the same researchers who discovered the vibranium used to create Steve Rogers’ Captain America shield in the 1940s may have also discovered the Heart-Shaped Herb and taken some of it home with them. The theorist goes on to speculate that Erskine may have discovered the herb, learned that it gave whoever consumed it enhanced abilities, and incorporated it into the serum in a way that negated the trip to the Ancestral Plane we saw in Black Panther whenever someone ingested it.

The Super Soldier Serum in the MCU — This theory could conceivably fit into the MCU’s established canon without much explanation or reworking. It would also help explain why the early version of the serum that Johann Schmidt/Red Skull took had such a negative physical reaction on him, and why the version of the serum that Arnim Zola used on Bucky seemed to have a different kind of effect on him (at least initially) than it had on Steve.

It would also explain why Karli Morgenthau (Erin Kellyman), the Flag-Smashers, and John Walker (Wyatt Russell) all seemed to become increasingly more aggressive after injecting themselves with the serum that was created by Dr. Wilfred Nagel (Olli Haaskivi) in The Falcon and the Winter Soldier. Is the reason Schmidt, Korgenthau, and Walker all seemed to change (for the worse) after taking the serum because they had a version of it that was missing the Heart-Shaped Herb?

Maybe! But that would undercut the whole concept of Stever Rogers being a genuinely good person as the source of his true power.

Still, it’s an interesting theory, and since Marvel has been pretty vague about what Erskine’s actual secret ingredient for the serum was, we’ll likely never know for sure. The current implication seems to be that the serum Schmidt took simply wasn’t balanced chemically yet, and that’s why it turned him physically into the Red Skull.

The increased aggressiveness we see from Walker and Morgenthau in Falcon and the Winter Soldier could easily just be chalked up to Erskine’s explanation of the serum from Captain America: The First Avenger as well. In that film, he tells Steve that the serum amplifies everything about a person, including their personality traits, which could also explain why Walker and Morgenthau changed after taking the serum.

It’s also unclear how this might explain why Isaiah Bradley (Carl Lumbly) survived the super-soldier treatment he underwent since it’s unlikely the U.S. government managed to get their hands on another Heart-Shaped Herb at any point in the 1950s.

The Inverse Analysis — The theory that the Wakandans’ Heart-Shaped Herb may have played a key role in the success of Dr. Erskine’s super-soldier serum is an interesting one. However, since there’s still quite a lot we don’t know about Erskine’s super-soldier serum or the many other iterations of it that have been made in the decades since he was killed, it’s impossible to know whether or not it’s accurate right now.

More like this
Entertainment
Jan. 25, 2023
The MCU could bring back a hero from its most underrated TV show
By Dais Johnston
Entertainment
Feb. 3, 2023
Marvel just revived its primate assassin — What to know about Hit-Monkey
By Mónica Marie Zorrilla
Entertainment
20 hours ago
Ant-Man's Memoir Is Real and Hints at Dark Quantumania Ending
By Eric Francisco
LEARN SOMETHING NEW EVERY DAY.
Related Tags
Share: