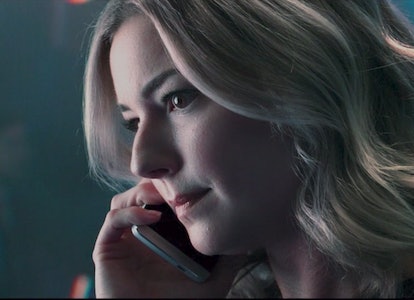 The Falcon and the Winter Soldier just answered so many of the Marvel Cinematic Universe’s second Disney+ series’ biggest questions.

Who is the mysterious cameo at the heart of Episode 5? What will happen to John Walker in the fallout of his ultra-violent break? These aren’t theoretical anymore. We have actual answers! But for as much as it accomplished, Episode 5 didn’t answer the one question everyone was debating after Episode 4: who is the Power Broker?

The puppet master supervillain was teased from the start of the series, but there’s still no confirmation about their identity... officially, anyway. A closer study of a quick scene may reveal the answer after all.

Major spoilers for Falcon and Winter Soldier Episode 5 are ahead.

What Happened — In between scenes of John Walker comforting Lemar Hoskins’ family and Sam recruiting Bucky for help with his boat, we revisit Sharon Carter among her vast art collection as she makes a phone call, speaks some French, and then says she “can pay double this time.”

It’s initially unclear who she’s talking to, but anyone who watches with subtitles sees the person on the other end of the line is none other than Batroc the Leaper, the classic Captain America villain seen in the very first scene of Falcon and the Winter Soldier.

A few scenes later, we see Batroc rendezvous with Karli Morgenthau in a park, alongside a veritable flash mob of Flag-Smashers. How did Batroc wind up in this position, following the call with Carter?

While there’s no clear confirmation she’s this powerful villain, everything seems to be pointing to Sharon as a villain. The massive art collection, straight out of a supervillain’s evil lair; the implication if not outright confirmation she was able to get Batroc out of prison; Batroc then falling in with Karli and the Flag-Smashers ... that’s not even mentioning all of Sharon’s various connections formed in Madripoor.

If Sharon is the Power Broker, it would confirm a huge fan theory after her first introduction in Episode 3. Sharon was reintroduced to the MCU at the same time the Flag-Smashers started talking about the Power Broker looking to collect on a debt. All that’s missing is full-on confirmation the two are one and the same.

The Inverse Analysis — While we don’t have that confirmation just yet, it would now be quite the plot twist for the Power Broker to be anyone other than Sharon. It begs the question: if she’s so powerful she can procure super-soldier serum for the right price, why was she so eager to help Sam and Bucky in exchange for a full pardon?

Is Sharon the Power Broker? Yes, probably. It’s a very anti-climatic way of staging the reveal, but the most logical conclusion to her speaking to Batroc would be her being the Power Broker. I suppose in an episode where you can introduce an iconic sitcom actress as Madame Hydra, a little thing like who the Power Broker is doesn’t really matter.