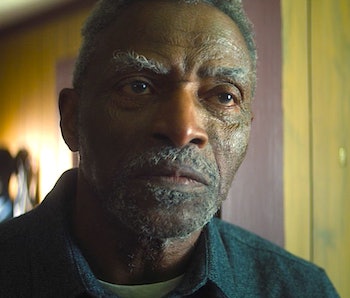 What separates Steve Rogers from every other Captain America wannabe? Is it his pure heart, or something much darker?

The Falcon and the Winter Soldier Episode 5 sees Anthony Mackie’s Sam Wilson pay a visit to Isaiah Bradley (Carl Lumbly), the Black super-soldier first introduced in Episode 2. During his visit, Sam asks Isaiah — who was experimented on and imprisoned for decades by the U.S. government — to explain what happened to him.

So Isaiah does just that. He tells Sam his story, beginning with how he was first given the Super Soldier Serum and ending with how he wound up in the quiet Baltimore neighborhood Sam and Bucky (Sebastian Stan) found him in. And there’s a detail in Isaiah’s backstory that doubles as a subtle callback to the actions of another MCU character.

We are, of course, talking about Steve Rogers.

Isaiah reveals to Sam that he wasn’t the only Black man that the U.S. government gave a variant of the Super Soldier Serum to in the 1950s. He was one of an entire squad of men given the serum under false pretenses. The government then sent those men on missions, despite some of the soldiers reacting poorly to their variants of the serum and dying as a result of it.

Eventually, some of the men were captured on one of their missions and kept in an enemy camp. In response, the government planned to destroy the entire camp in order to hide the “evidence.” Isaiah found out about this plan, broke out of the government facility he was being kept in, and rescued all of the captured men from the camp…

In 2011’s Captain America: The First Avenger, Chris Evans’ Steve Rogers finds out that Bucky’s entire unit has been captured by HYDRA and that nothing is being done to rescue them. So Steve, despite not holding any actual military rank, sneaks behind the enemy lines, rescues Bucky and the rest of the captured soldiers, and brings them back to a U.S. military base.

For his actions, Steve was rewarded and promoted — gaining the opportunity he’d been waiting for all along. For doing the same thing, however, Isaiah was punished, experimented on, tortured, and “erased.” It’s a compelling and moving detail, one that uses a singular parallel between the two characters’ stories to further drive home The Falcon and the Winter Soldier’s explorations of racial inequality and white supremacy in America.

The Inverse Analysis — Isaiah Bradley hasn’t had much screentime in The Falcon and the Winter Soldier, but his presence in the show’s story has made an undeniable impact. Part of that can be attributed to Carl Lumbly’s incredible, scene-stealing performance as the character, but most of it is a testament to just how well The Falcon and the Winter Soldier writers have woven Isaiah’s story into the show’s greater narrative.

Before Falcon and the Winter Soldier premiered, Isaiah Bradley was not a known character within the MCU. Cut to several weeks later, and it’s hard to think about the cinematic universe without him. Hopefully, this isn’t the last we’ve seen of the first Black Captain America.