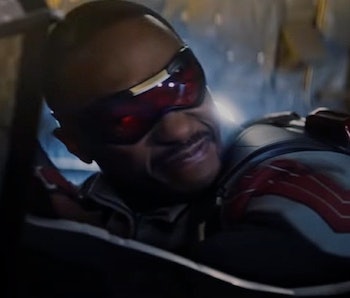 First, there was Loki. Then, there was Malekith and Hela. Soon, there will be Gorr the God Butcher. For Thor, the list of nemeses goes on and on … but there’s one person from his Avengers: Endgame past that stands out above the pack, the worst foe of them all.

No, not Thanos. We speak of another villain, one who finally stands revealed in all of his terrible glory, thanks to a genius bit of Falcon and the Winter Soldier marketing.

That villain, you ask? None other than…

Enter: The God of Noobs — For those who do not recall the name from Avengers: Endgame, a quick reminder.

Noobmaster69 is the video gamer who spends his time in the post-snap “Blip” terrorizing Thor over Fortnite. From a stale-aired living room in New Asgard, Thor exerts his mighty gaming efforts in the war against this dastardly enemy. Noobmaster became the lightning rod for Thor’s rage, shock-absorbing all of the Asgardian’s focus, what with the lack of an additional Thanos to behead.

(At least, not at that moment.)

Who is Noobmaster69, anyway? Nothing more than a butt of a joke — or someone much more? Wonder no more. The character’s identity now stands revealed … and believe it or not, it’s someone we already know.

The Master, Unmasked — TikTok user @thecinematicverse scores the prize for pointing this one out: Aaron, the Apple employee who “helps” Cap and Black Widow in Captain America: The Winter Soldier, is Noobmaster69.

In a commercial for Xbox, actor DC Pierson appears opposite Anthony Mackie, working for the video game company. He says his user tag is “Noobmaster69.”

Okay, very likely it’s just a joke, but why not take a moment to breathe in the possibilities? For starters, it’s a great sight gag: Pierson’s long locks rival Thor’s own. A hair battle to end all hair battles, with Fortnite as the venue. What could go wrong?

For another thing, it’s got big shades of “it’s all connected, man,” the vibe the Marvel Cinematic Universe loves going for. Appearing in Winter Soldier and theoretically as Noobmaster69 in Endgame, Aaron already has two major MCU roles under his belt. Next thing you know, we’re going to find out he’s the kid in the Iron Man costume from Iron Man 2.

(Just kidding. Everyone knows that kid is Spider-Man.)

The Inverse Analysis — So, where do we go from here? Is this just a button to a ridiculous Endgame scene, a ridiculous joke all its own, or the start of something much more?

Could we see Noobmaster69 again in Falcon and the Winter Soldier, given his commercial return opposite Anthony Mackie? Maybe someday we’ll see him lead his own squad of “Earth’s worst heroes,” the dregs of what the planet has to offer, alongside some of the other scrappier Marvel characters? Or even a straight-up super-villain squad: The Noobmasters of Evil, perhaps?

Allegiance aside, the theoretical line-up is already in place: Noobmaster69, Trevor Slattery, and Ralph Bohner, for starters. Anti-Avengers, assemble!

Falcon and the Winter Soldier streams March 19 on Disney+.

More like this
Entertainment
Jan. 26, 2023
Corey Stoll could have the chops to make a live-action M.O.D.O.K. work
By Mónica Marie Zorrilla
Entertainment
Jan. 25, 2023
The MCU could bring back a hero from its most underrated TV show
By Dais Johnston
Entertainment
15 hours ago
James Gunn's DCU Will Have Close Ties to This Year's DCEU Movies
By Eric Francisco
LEARN SOMETHING NEW EVERY DAY.
Related Tags
Share: