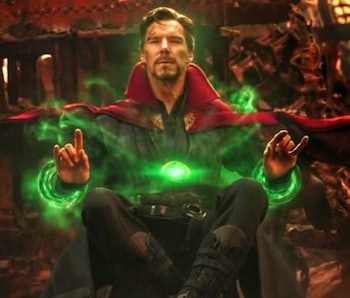 Even superheroes have to pay a price sometimes. In Avengers: Infinity War, Doctor Strange willingly gives up the Time Stone in return for Iron Man’s life. But before that, he uses the stone’s powers to travel in time and see just how the threat caused by Thanos and the Infinity Gauntlet could possibly work out. According to him, only one of 14,000,605 possibilities results in a victory.

But... surely there was a way to get out of that. Couldn’t Strange have just stopped Peter Quill from waking up Thanos right before Tony Stark and Spidey yanked off the gauntlet? Maybe, but what if Thanos wasn’t the target of Doctor Strange’s plan at all? A new fan theory explains this plot hole by evoking not only Dr. Strange’s thought process but the ethics of Thanos himself.

The theory — Redditor u/Hendersonismyhero explains that only one of those eventualities 14,000,605 is a victory because, to him, the only reasonable endgame (no pun intended) would be for all the stones to be destroyed at the same time. He knows just how much destruction could be caused by only one stone, and having five scattered around the galaxy would prolong the fight against those wielding the stones and possibly result in a worse event than the Snap itself.

Even if Thanos was defeated, as long as the stones existed, someone else might try to use them in the same way. At this point in the Infinity Saga, it’s basically open knowledge throughout the galaxy that combining the six Infinity Stones gives their owner virtually unlimited power.

So Dr. Strange’s enemy is not Thanos. It’s not the Infinity Gauntlet. It’s merely the stones. To him, Thanos and the Gauntlet are tools that will be used to destroy the stones in one fell swoop. The only way for that to happen is for Doctor Strange to give Thanos the Time Stone.

What’s really interesting about this choice by Doctor Strange is that it draws an interesting parallel between him and Thanos. The Mad Titan believes he’s doing the right thing, even if that “right thing” is a mass tragedy for everyone else in the universe.

Doctor Strange hands over the Time Stone, making himself complicit in the Snap too. However, he is equally convinced he’s doing the right thing because he has seen the future, and he knows the only win condition — the one that’s later brought to fruition in Endgame — means Thanos has to wield the Gauntlet.

Thanos has a strange code of ethics: after he does the Snap, he destroys the stones and self-exiles as we later see in Endgame. So, yeah, he wiped out half the life on Earth, but at least he didn’t use it to finish the job or further affect the course of the universe. He thought he knew what the right thing to do was, he did it, and then he made sure nobody could do anything worse.

It’s yet another example of utilitarian ethics, the “end justifies the means” being used for two incredibly different purposes. Utilitarianism could mean “doing something truly evil because you personally believe it’s the only right thing to do,” or it could mean “paying a tough price and making an unpopular decision in order to ensure ultimate success.

The Inverse analysis — This doesn’t mean that Thanos was at all justified in his actions, but a peek into how his decision-making works could explain why Doctor Strange was so willing to sacrifice the Time Stone. Even if this theory isn’t canon, it certainly will start conversations about how The Avengers pick the “right” thing to do, and how that often means sacrificing a lot along the way.