Last Ronin: TMNT returns to its roots for a cyberpunk revenge story 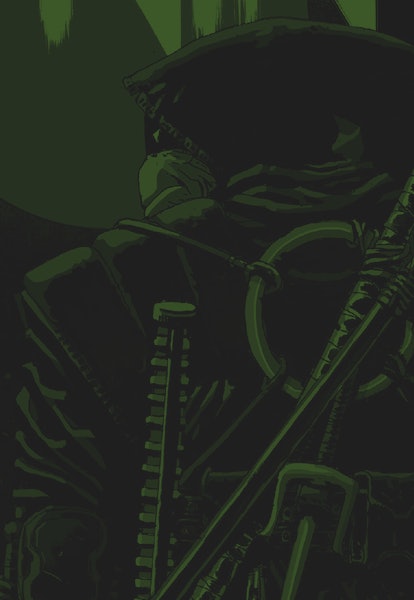 Before the Teenage Mutant Ninja Turtles became a generational touchstone, their creators almost killed them off.

In 1987, comic book creators Kevin Eastman and Peter Laird were approaching the eleventh issue of their red-hot, black and white indie hit Teenage Mutant Ninja Turtles. As the first chapter of the Ninja Turtles saga came to an end, the two speculated a dark future for Leonardo, Michelangelo, Donatello, and Raphael.

In a dystopian "walled" New York City plagued by global warming and political turmoil, a lone Turtle seeks vengeance for his fallen brothers. Dressed in black and brandishing the weaponry of his brothers, the identity of the "Ronin" is a secret, for now.

Who is the Ronin? And who — or what — wiped out Clan Cowabunga? All will be revealed in The Last Ronin, a new five-part IDW comic book by Eastman and Tom Waltz based on a 30-year-old concept nearly lost to time. In anticipation of the first issue on October 28, Inverse has an exclusive peek of The Last Ronin ashcan below.

"In 1987, I said, 'Why don't we look 30 years down the road? Say 2017?' That would give us the final story, and we can start filling gaps," Eastman tells Inverse. "That was the furthest [we could think of]. That's where we are going to be years down the road."

But neither Eastman nor Laird knew how big the Ninja Turtles would be by the end of that year. The success of the Ninja Turtles television series, which premiered in December 1987, kicked off a mega-franchise that spawned toys, video games, breakfast cereals, stage shows, and by 1990, a live-action movie (with sequels). The mainstream popularity of their gritty reptiles kept Eastman and Laird from working on The Last Ronin. The story laid dormant as a twenty-page outline for decades, lost among Eastman's possessions... until ten years ago.

"I'm a packrat," Eastman jokes, "especially with Turtles archives. I keep everything. I discovered this story years ago, on a stack of other notes. This was an outline with a beginning, middle, and end, of a concept Peter and I had of what we call the foundation of the Turtles universe."

Around the time Eastman unearthed The Last Ronin, the Turtles were reborn. In 2011, a new Teenage Mutant Ninja Turtles comic book began at IDW. Alongside Eastman for the reboot has been Tom Waltz, a former U.S. Marine turned writer. "To me, it's what I call the definitive Turtles series," Eastman praises Waltz's Ninja Turtles, likening it to Walt Simonson's legendary Thor.

"Kevin brought it up as an idea we could work on," Waltz tells Inverse. "Something that would be a little different, and a little more mature. He showed me the outline and I was amazed. It's different but familiar, like Dark Knight Returns. That's the first thing I kind of saw."

Both Eastman and Waltz maintain that Laird's futurism, dated 1987, had "predictions" of a then-future 2017 that are now, in hindsight, scary accurate. While the two hesitate to reveal specifics for fear of spoilers, "He predicted stuff that now exists," says Eastman. "From smartphones to some of the environmental concerns he had back then."

"The science and even some of the political predictions in Peter's notes were Nostradamus-like," Waltz says, compelling Waltz and Eastman to speculate a new future of 2040. "Because Peter was so accurate, and because this is still a future story, I told Kevin we're gonna have to make up our own future."

While the world of The Last Ronin is different from the original concept, the nuts and bolts of the story are still the same: A revenge tale about brotherhood beyond death.

"We start with just one Turtle left," Eastman says. "It reflects back some of the very isms Peter and I put into the very first issue. The Turtles are raised and trained for vengeance. They were a family trained to complete a task by Master Splinter."

"Even when people pass and you lose people, you don't really lose them," says Waltz. "You carry them with you. But the issue is that the Ronin has a burden. His father trained them for one thing. As the last member of his family, he has to see this through in some form. When you're carrying that burden, in ways both good and bad, you carry the past with you. That's what vengeance is all about."

The suspense over the Ronin's identity is, obviously, a hook for the book. But Waltz assures "no Turtle fan will be disappointed" if their favorite isn't the Ronin. "The way we're telling the story, it will make sense why and who it is."

"It's in the heart and soul of the story," adds Eastman. "When the fans realize who it is, we want it to be meaningful and powerful."

Eastman says The Last Ronin shares DNA with the origins of the Ninja Turtles. Back in 1983, the very beginning of TMNT involved Eastman sketching a tongue-in-cheek homage to his idol, Bruce Lee. "I was a huge Bruce Lee fan, and Bruce Lee was an animal. But what's the silliest animal he would be?" A lightning-fast martial artist should be a turtle, of course. "The first drawing of a Ninja Turtle, you see this Bruce Lee-like pose with the nunchucks like that famous scene. We all loved and adored Bruce Lee."

The black-clad Ronin is an embodiment of Jeet Kune Do, Bruce Lee's discipline in training in all martial arts and adopting whatever is useful. It's a theme Eastman explored in Ninja Turtles #21 that runs deeper in The Last Ronin.

"Splinter was a believer in Jeet Kune Do," says Eastman. "And Bruce Lee was about training in all forms." Everyone can identify each Ninja Turtles based on their weapons, from Leonardo's katanas to Donatello's bo staff, but the Ronin has mastered their brother's tools to aid them in their mission.

"If you use the same weapon all the time, you open yourself up to weaknesses. This character would be a master of not only his original weapon, but his brothers' weapons too, so he can deal with this revenge and family honor."

To Eastman and Waltz, the canon of Ronin is not important. Whether you're a fan of the cartoons or the IDW comic books, The Last Ronin will satisfy wherever your heart lies in the Ninja Turtles multiverse. "We're creating a whole new Turtles universe here," Eastman says. "That has the potential, like Dark Knight Returns, to expand and have its own history and create more Turtles stories to tell. Turtles never die."

The Last Ronin #1 will be released October 28.