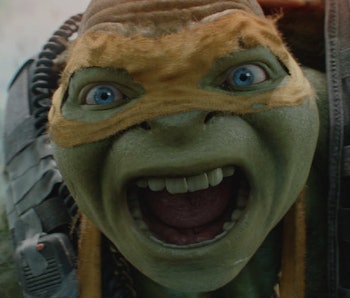 There’s an important scene in the new Teenage Mutant Ninja Turtles film, Out Of The Shadows, in which Laura Linney’s character and a handful of cops lay eyes upon the Turtles and react negatively. Mikey even tells Splinter later, with tears in his pretty-real-but-not-quite-real eyes, that the people of New York don’t just hate the Turtles — they fear them. So, what’s going on there?

Though the concept of the “uncanny” is well over a century old, we hear it more and more frequently as advancements in CGI and animation push the topic of the “Uncanny Valley” (a separate though related concept put forth by Masahiro Mori in 1970) to into the conversation about close-to-human, but not-actually-human characters in entertainment.

In 1906, Ernst Jentsch wrote “On the Psychology of the Uncanny” in which he discussed the concept of the uncanny. Jentsch explained that the underlying idea of our discomfort with the uncanny stems from our unfamiliarity with it. That is, we are, by and large, comfortable with things we can recognize and understand. Despite confusion, we aren’t made uncomfortable by things that are fundamentally familiar to us.

In the paper translated by Roy Sellars), Jentsch says, “It is an old experience that the traditional, the usual and the hereditary is dear and familiar to most people, and that they incorporate the new and the unusual with mistrust, unease and even hostility (misoneism).”

That is to say, we’re perfectly fine being confused or uncertain – so long as we’re being confused by things we recognize and understand. But when faced with something new, something clearly unlike anything we’ve seen before, it causes an uncomfortable disorientation.

As humans, we tend to want to categorize and understand things so that we know how to interact with them. We know how humans act. We know how animals, or turtles, for example, act. We know how trees and even how robots act. But when faced with something new, like a creature that’s part human teenager, part turtle, we want to categorize the subject’s behavior so that we can better understand it. And that’s where we come into contact with the Uncanny Valley, which is largely concerned with non-human (or, at least, non-living human) beings acting sort-of-but-not-entirely like humans.

Masahiro Mori’s 1970 work put forth that particularly when it comes to robots designed to have humanlike features and movements, there’s a risk of falling into the space between safe and non-threatening features that aren’t like humans (industrial robots, and even vaguely humanoid robots on the moving end of the spectrum with stuffed animals in the still category) and healthy human beings, whose behavior we can easily recognize, interpret, categorize and understand.

This space between is called the Uncanny Valley and represents a steep drop off that represents our level of comfort with the thing in question. Things that fall into the valley? The likes of corpses, zombies, too-real prosthetic limbs, and teenage mutant ninja turtles.

There are two ways to look at this phenomenon, and that’s from the diegetic perspective — that is, in the world of the film — and the audience perspective.

From an audience perspective, the Turtles may look odd, but they’re not terribly unnerving. Given what we’ve seen with CGI, it’s unlikely that the Turtles will have any significant uncanny effect on us as movie viewers, because they’re clearly designed characters and they don’t read as strictly human to us. We have an understanding that these are fiction characters, not unlike Groot or Rocket Raccoon from Guardians of the Galaxy or the Na’vi in Avatar.

From an in-world perspective, though, the Turtles would likely freak you the hell out if you met them on the street. And that’s because there’s no real understanding that they’re fictional, right? In that context, they’re real and very, very unfamiliar. Remember: according to Jetsch’s very early discussion of uncanny, things that are unfamiliar to us, which don’t fit into understanding of the world, have the power to make us deeply uncomfortable.

All of a sudden, were faced with something that walks, talks, fights, and moves in a pretty-much-human-but-not-quite-human way, and our fear essentially comes down to expectation and judgement. Sure, they don’t look like humans, but their display of human behaviors without being human is going to create some serious unfamiliarity and discomfort.

When we see humans, we expect human behaviors. But to see something that is unquestionably not human acting human and taking on human behaviors (see: androids, zombies), it makes us super uncomfortable. It’s not surprising that Laura Linney’s character, Chief Vincent, was unnerved. If you saw a giant muscle-y turtle walking and talking, it’s doubtful that you’d react any better.

Ultimately, it’s your brain’s fault. It’s just trying to categorize things and people around you to help you understand, interpret, and gauge threat levels. When something presents human behaviors but is not immediately familiar or easy to understand, it’s going to send up some red flags.

You might be able to get used to it if you ever found yourself in a situation where you were repeatedly exposed to IRL Teenage Mutant Ninja Turtles, but make no mistake: upon first meeting, those Turtles are probably going to scare the hell out of you.

More like this
Gaming
6.22.2022 3:00 PM
TMNT: Shredder's Revenge is the retro beat ‘em up of your dreams
By Robin Bea
Entertainment
6.29.2022 11:00 AM
Marvel leak reveals a groundbreaking new god in Black Panther 2
By Dais Johnston
Entertainment
6.29.2022 10:30 AM
25 years ago, Nic Cage made his most explosive sci-fi movie ever — it was almost even better
By Jake Kleinman
Related Tags
Share: