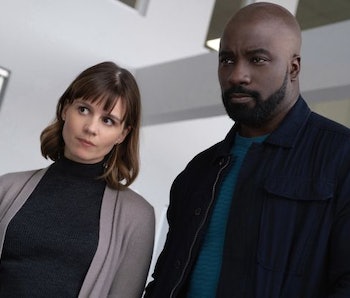 Monstrous things are lurking everywhere. In Evil Season 1, skeptical forensic psychologist Kristen Bouchard a got up close and personal with a variety of supernatural baddies after joining up with David Acosta and Ben Shakir. However, an unexpected character may have played a much more crucial role in Kristen’s life than we thought, and it could have a major impact on her downward spiral in Season 2.

Spoilers ahead for Evil Season 1.

On Evil, it isn’t so much the supernatural that is considered horrific, but the everyday malice that festers in people’s hearts and minds and pushes them to do terrible acts. Kristen has always strived to be on the side of good, helping people through their darkest moments while working through her own issues. Her anxieties often manifest during night terrors, where she is visited by George, a demon intent on preying upon her worst fears and driving her over the edge in the process.

Looking back on Evil’s very first episode, Kristen didn’t begin experiencing night terrors until after a violent encounter with Orson LeRoux, a murdering rapist who was trying to evade his charges by pretending he was possessed by a demon. During an interrogation, Orson physically attacked her and left red bruising around Kristen’s wrist. The altercation shook her up and it was shortly after that she began dreaming of George and his demonic red eyes.

We know that Orson was working alongside Dr. Leland Townsend, the villainous psychologist who targeted Kristen early on in the show. By the Season 1 finale, Kristen had a cross burned into her palm (a sign of demonic possession in the world of Evil) and presumably killed Orson after he came to see her to make amends. With this timeline in mind, it’s possible that Leland planted the seeds for Kristen’s downfall as early on as the pilot and used Orson as a ploy to get close to her.

Orson was speaking in Latin right before he attacked Kristen and, paired with the red mark on her wrist, it may have intentionally opened her up to demonic possession. We can also assume that Kristen did actually kill Orson and that it was probably Leland’s plan for her to do so all along. After all, the wily psychologist is eerily obsessed with Kristen and wants nothing more than for her to commit her share of atrocities. We also know that he serves a horned demon master, which make his intentions all the more obvious for his rival.

With the revelation that Orson may have had a hand in her possession, Kristen may go down a very dark path in Season 2 all thanks to Leland’s machinations. Perhaps he sees her skepticism for the supernatural as a challenge or she’s simply another person on a long list of potential offerings to his demon master. Ultimately, Kristen may try to cover up Orson’s death or deny that her killing him was the result of a possession at all. Either way, Kristen has been marked in more ways than one and Season 2 could finally explore what that means for her moving forward.