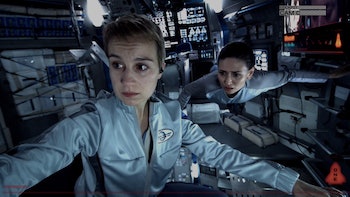 By 2013, making a horror movie with pretend “found footage” was already passé. But for whatever reasons, making a space-based science fiction movie out of convincing found footage had never really been done. That is, until Europa Report.

Nine years after its release in 2013, this indie thriller still succeeds in being one of the most realistic sci-fi movies of all time. Now that it’s streaming on Amazon Prime Video, Here’s why it deserves another look, or if you missed it the first time, a glimpse into why it’s a modern sci-fi classic.

The premise of Europa Report is also the style of Europa Report. Like The Blair Witch Project or Paranormal Activity, what drives the tension of the movie is, primarily, its nonlinear, faux-non-fiction structure. This isn’t to say Europa Report doesn’t have some great performances and good sci-fi concepts, it does. But if you were to read a synopsis, you’d likely be very disappointed. But if the assignment was to make a nail-biting sci-fi movie that completely relies on style to create narrative thrills, then Europa Report understood the assignment.

Presented as lost footage from a failed mission to one of the moons of Jupiter, the movie telegraphs out its calamity ahead of time. In the contemporary “present” of the film, this space mission has already taken place, and therefore, what we’re seeing is a reconstruction of what went wrong. This means that often, characters’ demise take place before we’ve gotten to know them, which creates a chilling, disorienting feeling which sticks with you, even while other things are happening.

There’s no monster picking off the crew in this movie, but instead, a series of realistic-but-unfortunate events, which lead to various tragedies great and small. For fans of The Expanse or For All Mankind, the nitty-gritty problems of space travel will feel familiar, even if the tone is direr.

Europa Report also inserts one tantalizing plot question into nearly everything that’s happening. Is there some kind of alien life on Europa? Will we get to see it? Hiding the actual alien from moviegoers in a movie about aliens is a very old trick. Like Jaws, the less we see of the alien here, the scarier it is. This elusiveness and dread also give Europa Report the feeling of a very low-budget version of Prometheus, which is actually a compliment.

While all the actors give commendable performances, one stand-out is easily Daniel Wu, who, these days, is probably more familiar to sci-fi fans for his roles on Westworld. In Europa Report, Wu plays William Xu, who basically functions as the defacto captain. Although the point of the movie is to make you think these are real astronauts who are aware they’re being filmed, Wu gives the film a little bit more star power, which paradoxically helps ground it. In other words, even though the found footage thing is convincing, Wu’s pitch-perfect style helps prevent the movie from getting too wrapped up in that construct.

Genre fans probably know Wu best from Into the Badlands, which began two years after Europa Report. If someone is looking for the hardest working man in sci-fi, it may be Daniel Wu. If you’re not sold on the style or concept of Europa Report, watch it for him.

More broadly, what makes Europa Report work is just how committed the movie is to its premise. It’s not jokey and immediately dated like The Martian and it’s not over-the-top like the sci-fi thriller Life. It seems to sit in an alternate universe where sci-fi movies don’t need to deliver more than what they promise. In a sense, Europa Report actually doesn’t promise anything, which is why when you get glimmers of events you didn’t expect, it’s exciting and sublime.

Science fiction tropes are hard to make new, especially in low-budget movies. But Europa Report proved that sometimes, intentional limitations can generate the best storytelling. The movie only tells us what the cameras captured, and that means, we get everything we need to know. A different kind of film would have given us more, but Europa Report is brilliant because it is, intentionally, less.