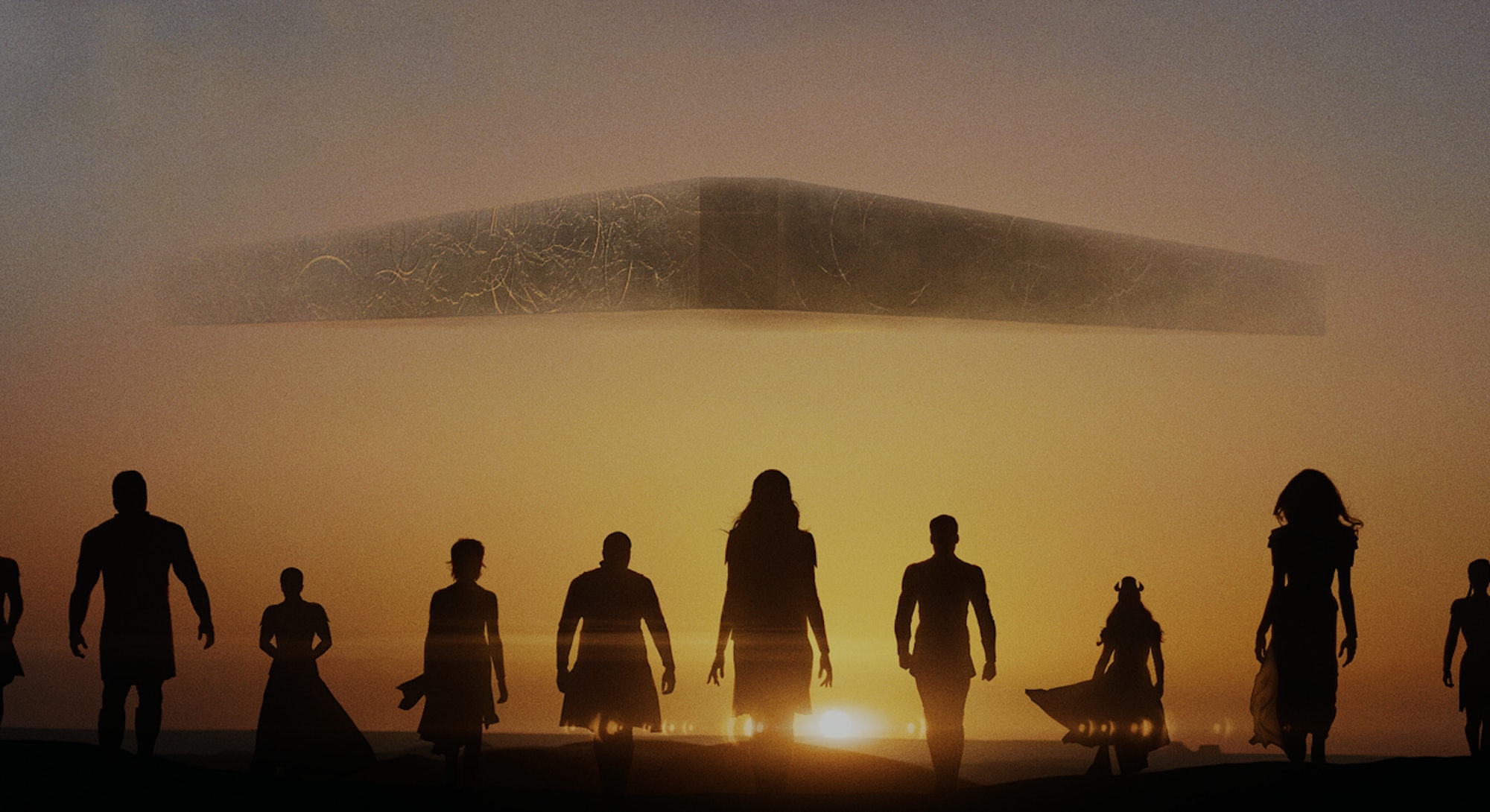 What do want from cinematic universes?

Perhaps the better question is: what do we expect from cinematic universes? The release of the first teaser trailer for Chloe Zhao’s Eternals brought about a range of reactions, some positive and some negative. But the exact feelings folks have about the teaser — which raked in 77 million views and once again goes to show that Twitter discourse does not reflect the larger world — is less interesting than the why behind those feelings.

For months, we’ve heard that Zhao’s film is a significant break from the Marvel mode, a romantic sci-fi epic that might be Marvel Studios’ first prestige pic. Yet, immediately upon release of the trailer, there were those who claimed the film didn’t look different from anything else in the Marvel Cinematic Universe, that the images some (including myself) found beautiful were not, and that Eternals would be the same as every other MCU movie.

Then there were complaints that the teaser, for a movie coming in November, didn’t show enough, that it looked boring, and that the Avengers reference in the tag at the end was unnecessary. Now, I’m not suggesting that people shouldn’t criticize things, especially when that thing happens to be the most popular franchise in the world, but I do want to dive into our expectations for cinematic universes and superhero stories.

Welcome dear readers, nerds, and nerdlings, to The Gutter, a weekly exploration of the concepts, criticisms, and curiosities that live between the panels of comic books and their adaptations.

Personally, I do think Eternals, visually, in the couple minutes of footage that we’ve seen, looks different from your standard MCU filmography. Having followed Zhao’s career through Songs My Brothers Taught Me, The Rider, and Nomadland, here are a few of her trademark techniques I noticed in the new trailer:

Zhao isn’t the first filmmaker in the MCU to break the mold. While Marvel does have a house style, not all Marvel movies look the same. There are certain visual similarities, especially in terms of costumes and technology across films like Guardians of the Galaxy, Thor: Ragnarok, and Black Panther, but ultimately look and feel like the work of different directors. They have different goals, all of which reflect filmmakers with strong voices.

Perhaps it’s a little easier to put Zhao in that camp because she (like James Gunn, Taika Waititi, and Ryan Coogler) firmly established her aesthetic as a filmmaker before jumping into the MCU. But even looking at a less beloved entry like Thor: The Dark World, Alan Taylor’s film looks distinct enough to separate it among the franchise. It may not have much to say, which bolsters the “all are the same” narrative, but Dark World can still be picked out of a lineup.

I’m at a loss for the differences we’re expecting to see in this franchise.

So yes, there are differences between MCU entries. As for how much difference, that’s certainly debatable. Some films could push their distinctions further, specifically in terms of theme. But here’s the thing: if Eternals looks and feels like every other Marvel movie, then I’m at a loss for the differences we’re expecting to see in this franchise.

What kind of wild visual and tonal left turn are we expecting these movies to take? When it comes to franchise filmmaking, even those that are in the world of multiple directors, I don’t think we often see drastic visual shifts because there is an intention for the franchise to still be recognizable as the franchise. Friday the 13th, Fast and Furious, Star Trek, and Jurassic Park may all give us recognizable flourishes that point to their directors, but none of them are really stretching all that hard to be different in the way we expect from Marvel Studios.

Perhaps that’s because no other franchise releases as many installments a year as the MCU. Perhaps in the franchises’ dominance, we’ve stopped looking for visual and tonal elements that separate them in the way we do for franchises that only have entries every two or three years. Look at something like James Bond, which has remained recognizably Bond for more than 50 years. There are big tonal shifts and updates in technology, and Brosnan’s last two entries may have tried a little too hard to capture 21st century “cool,” making them age like chewing gum, but there is a certain accepted cinematic language to the franchise, even twenty-four films deep. But I digress. I think perhaps because of the sheer amount of Marvel Studios’ films we get that we’re failing to see the differences.

Maybe it’s not variety that’s being sought, but directorial preference.

I’m not saying I want less, but maybe we could think more about our criticisms and be more direct about what we’re asking for. Especially as Marvel Studios explores streaming with its Disney+ miniseries, several concerns, specifically in terms of tone and thematic intent are being addressed, alongside visual variances.

But I must admit that I find it amusing when some of the same people who get worked up about Marvel movies looking and feeling the same want Zack Snyder and Christopher Nolan to take over the DCEU. If that’s the case, then maybe it’s not variety that’s being sought, but directorial preference. That’s fine, of course, but then that’s what should be said rather than masking it under the argument that each installment should be visually and tonally distinct.

When you have a franchise operating as a cinematic universe and based on source material that is itself a shared universe, you’re going to run into a lot of similarities. There’s only so far you can stretch the look and feel of superhero stories and still expect something to be novel.

It’s ok to not find revolution in every cape and cowl.

Cinema is vast and wide, and if you’re expecting superhero stories and cinematic universes to check all those boxes, maybe you should look elsewhere. If you genuinely want to see something that doesn’t look or feel like anything you’ve seen before, broaden your search. It’s ok to not find revolution in every cape and cowl. Adjust your expectations accordingly.

Send your ideas for a column, feedback, or anything else you want us to see at thegutter@inverse.com!