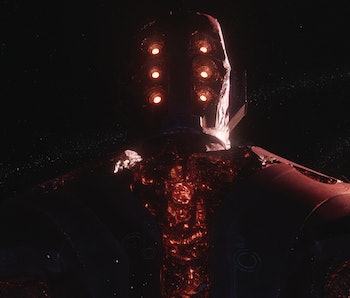 Marvel Studios is on the verge of entering new territory with Moon Knight. The highly anticipated Disney+ show stars Oscar Isaac as Marc Spector, a man with dissociative identity disorder chosen to be the Earthly avatar of the Egyptian god of the moon. The series, which also stars Ethan Hawke and May Calamawy, is shaping up to be one of the darkest and trippiest MCU titles to date.

That said, Moon Knight is largely disconnected from the MCU’s other franchises. While that separation may be frustrating for some longtime fans, it also means that casual viewers won’t need to know too much about the history of the MCU to enjoy Moon Knight’s story.

However, there is one MCU movie that Moon Knight is similar to, and that’s Eternals. Last year’s Chloé Zhao-directed superhero epic may not have lived up to a lot of MCU fans’ expectations, but it shares some thematic and stylistic connections with Moon Knight that are hard to ignore. Here’s why you should stream Eternals ahead of Moon Knight’s March 30th premiere.

Eternals remains one of the most ambitious movies that Marvel Studios has made. Not only does the film begin with an opening passage about the physical creation of the MCU, but its story revolves around a group of immortals as they set out to defy the wishes of their cosmic creator in the hopes of saving the Earth from total annihilation.

While Moon Knight doesn’t tell a story quite as massive as that, the Disney+ show is heavily concerned with the relationship its central character has to the god that gave him his powers. That relationship is presented differently than the Eternals’ bond is to their creator, a celestial known as Arishem. However, the tension that exists between Marc and his deity, Khonshu, makes their dynamic reminiscent of the Eternals.

Moon Knight and Eternals also look strikingly similar. Both projects were helmed by filmmakers with experience making much more intimate movies than what’s typically seen in the MCU, and that’s evident in their approach. The two titles both boast more natural lighting techniques than other MCU films do, and both are more willing to experiment with editing and camera movement.

Moon Knight is wildly different from a lot of the Marvel movies and TV shows that have come before it, which makes recommending an MCU movie that’s similar to it a little more difficult than usual. But no Marvel movie has more in common with Moon Knight than Eternals.

The two titles, while wildly different in scale and tone, share strong thematic and aesthetic similarities. So if you want to prepare yourself for Moon Knight’s long-awaited Disney+ premiere, make some popcorn and fire up Eternals.

Eternals is available to stream now on Disney+.

More like this
Entertainment
Jan. 30, 2023
Doctor Who Could Become the New Marvel — But There's a Catch
By Ryan Britt
Culture
Jan. 26, 2023
Michael J. Fox’s strangest movie remains a stupid, ridiculous joy
By Mónica Marie Zorrilla
Entertainment
Jan. 25, 2023
The MCU could bring back a hero from its most underrated TV show
By Dais Johnston
LEARN SOMETHING NEW EVERY DAY.
Related Tags
Share: