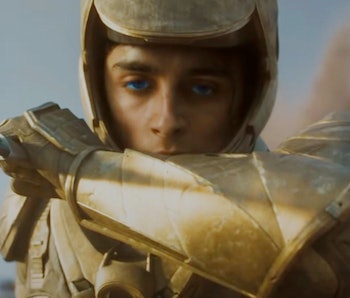 The story of Paul Atreides does not have a happy ending. Sorry, if you’re new to Dune, this is just a fact, one that director Denis Villeneuve has said when he calls the story a tragedy. The spoiler for the end of Paul’s journey has been floating around since the publication of Dune Messiah in 1969. But, in the new film Dune: Part One, we’re still at the beginning of Paul’s journey, and his visions of the future might be a little... confusing.

Here’s what Paul’s visions really mean and why the sequel, Dune: Part Two, might not turn out the way you think.

For the most part, all of Paul’s visions in Dune: Part One are impressionistic. Almost nothing he sees in his future visions is literal but instead serves as a visual metaphor for what will happen. Here are some examples from the film:

With the possible exception of that last one, the first three of these visions don’t come “true” in a literal sense. Yes, Duncan went to live with the Fremen for a little while, which kind of forged the path for Paul and Jessica to find them. But the exact scene as it’s shown in the vision doesn’t happen.

Obviously, Paul isn’t stabbed by Chani, but because Chani gives him the crysknife to fight Jamis, this “destroys” the old Paul Atreides. So, Paul’s vision of Chani stabbing him is a metaphor.

The same goes for the sweet visions of Paul becoming friends with Jamis. In the dream, it seems like Jamis will guide Paul to learn the ways of the Fremen. But, then, in “real life,” Paul is forced to fight Jamis. But, in doing this, Jamis does teach Paul the ways of the Fremen. So again, the dream was true but only from a metaphorical standpoint.

The question is, what does this mean for Paul in Part Two?

If you read the novel Dune, you’ll find that almost everything that happens in the book is foreshadowed with a heavy hand. This is because the novel's framing is told like a historical text, with the writings of Princess Irulan asserting future-tense knowledge about the entire story of Paul. The new film does this a little bit but not as much as the novel. The point is, reading the book will spoil the book more than watching the movie will foreshadow the rest of the film.

So, what do we make of Paul’s visions, and how might they inform Dune: Part Two? Will the scene where Paul fights in battle armor with glowing blue eyes happen?

The short answer is: Probably, but it almost certainly won’t look exactly like that. The events of Dune: Part Two will chronicle the last third of the novel, from roughly page 500 to page 794. In these pages, Paul’s mom will give birth to a daughter, Alia. In Dune: Part One, we see Lady Jessica holding a baby in one of Paul’s visions, so that checks out. Paul and Chani also have a baby, but that son passes away.

Finally, Paul and Chani will lead a massive revolt against the Empire and eventually be victorious. Paul will also marry Princess Irulan, the Emperor’s daughter, to cement his power as the new ruler of the universe. Paul doesn’t have a vision about this detail in Dune: Part One, but he does tell Liet-Kynes that he plans to marry the Emperor’s daughter.

Bottom line: Paul will acquire the blue eyes of the Fremen. He will rule over the universe with Chani. And he will marry the Emperor’s daughter. However, this doesn’t mean the same scenes we glimpse in Part One will be reproduced in Part Two.

In other words, that part where Chani and Paul are looking over the people of Caladan dressed all in black as their slick, new goth rulers — that might not happen exactly like that in Part Two. But, it will be effectively true. All the visions in Part One that remain unfulfilled will manifest themselves in Part Two in some way, shape, or form.

If Denis Villeneuve gets his way and makes a trilogy of films based on the novels Dune and Dune Messiah, then the proposed third film in this series will see some serious bummers for Paul. While Paul and Chani’s first son passes away, he will eventually have two more kids — Leto II and Ghanima. The trouble is that Chani passes away during childbirth, which sets off a whole chain of events, including a clone-version of Duncan Idaho (Jason Momoa’s character) turning out to be a sleeper agent and Paul getting blinded.

As an older man, Paul walks into the desert of Arrakis alone and in full self-exile. In Dune: Part One, we don’t see any indication of this endgame for Paul, but that’s what’s coming in the aftermath of Dune: Part Two. Also, by the end of the first Dune novel and Dune Messiah, Paul’s ability to see the future is only heightened.

Right now, there are some good indications that Dune: Part Two might happen. Warner Bros. executive Ann Sarnoff went on record saying this:

“Will we have a sequel to Dune? If you watch the movie you see how it ends. I think you pretty much know the answer to that.”

If Dune: Part Two happens, audiences should brace themselves for even more cryptic visions from Paul’s future. And those visions will likely include a reborn version of Duncan Idaho, the birth of his twin children, and a grim ending where he ends up all alone in the sand.

Dune: Part One is out in theaters now and streaming on HBO Max.