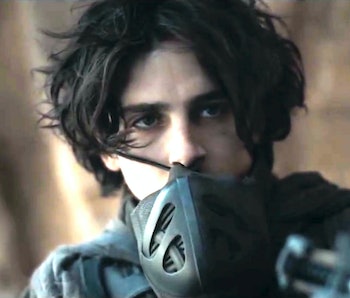 Like Peter Jackson's Lord of the Rings trilogy, or the first couple of seasons of Game of Thrones, avoiding spoilers for the Dune movie will require everyone to avoid the six novels written by Frank Herbert, which fully spell out the epic story of the planet Arrakis. If you want to know what happens to Timothée Chalamet's version of Paul Atreides after he arrives on Arrakis with his family, it's pretty easy to figure out. For longtime Dune-heads, the upcoming and long-awaited Denis Villeneuve cinematic version of the Frank Herbert epic is mostly a game of how much is the same and how much is different.

All signs point toward Villeneuve pushing for a faithful adaptation of Dune. This is partly why he claimed he wanted two films to do the first book justice. But, what if there's a major change coming? Like Peter Jackson changed the actions of Faramir and Gandalf, what if Villeneuve alters Paul's eventual fate? Here are three ways the new Dune could hypothetically change Paul's destiny without pissing off Dune loyalists.

Wild spice-induced speculation ahead. Spoilers for the books follow.

What happens to Paul in the Dune books?

By the end of the first novel, Paul basically takes over the planet Arrakis and deposes the Emperor of the Universe. That's good, right? Well, it's a mixed bag.

In the second book Dune: Messiah, Paul oversees a galaxy-spanning jihad that kills billions. Presumably, he's all about making sure only bad people are killed, but you know, the morality here isn't supposed to be clear-cut. Dune isn't like Star Wars. It's not about heroes and setting things right. Instead, it's more like, hey, this is what would really happen. By the end of Dune: Messiah, Paul has been blinded and wandering the desert alone, basically trying to die. In Children of Dune, he reemerges and tries to kind of set his followers straight, only to get stabbed to death.

Bummer, right? If the Dune 2021 movie does span sequels or a TV series, it feels strange that everyone would be looking forward to all of these things happening to Paul. So, what if Villeneuve and company cook up a smart pivot?

Paul's journey could be conflated with his son's

In the later books, Paul's son, Leto II, becomes a creepy sandworm hybrid and becomes the God Emperor of Dune who rules the galaxy for thousands of years. Part of this connected with Leto II putting humanity on the so-called "golden path." While the idea of having Dune sequels depicting Leto II is interesting and compelling, it also would require the audience to invest in a new character. So, what if the new Dune changes this. What if now, instead of having Leto II become the God Emperor of Dune, it's just Paul?

Consolidating the stories of Paul and Leto into the same character arc is radical for sure, but it would prevent an ending for Paul where he just gets stabbed to death. Plus, we could get to see Chalamet as a space worm!

The objective "story" of Dune is (kind of) told by the historian Princess Irulan. In the first book, she becomes Paul's wife out of political convenience, but she's not his true love — that's the Fremen known as Chani. In the new film, Chani will be played by Zeyenda, while Killing Eve's Jodie Comer will play the de facto narrator, Irulan.

Here's the thing. Dune fans have loved to play with the idea that Irulan's telling of the story is subjective, and that there might be a different, "true" narrative hidden underneath the "official" historical account.

In the 1984 fan-created Dune Encyclopedia, several fans wrote essays as in-universe historians, suggesting that Irulan's account of Paul's story could be inaccurate. The idea here is that perhaps there's another version of Paul's story that ends very differently than the one we've seen, including the idea that he was actually originally Fremen, and not from the planet Caladan at all.

Again, these are in-universe fan theories, that aren't part of the original novels. But hey, if you're looking for a way to change Paul's fate, shifting the narrative perspective might be the ticket.

Paul could die at the end of the first Dune

I know, you're thinking — how is this better? If the whole point is to have Paul avoid his tragic fate, why would killing him earlier fix that? Well, arguably, Paul's hero's journey ends in tragedy, partially because he makes some bad decisions, and partially because other people suck. But, if the story was altered to make Paul into a martyr sooner, it could actually make his book-death way less depressing.

Paul's big showdown in the first Dune book is mostly about him figuring out a way to get the contemporary Emperor (Irulan's dad) Shaddam IV, to abdicate the throne. What if this backfired? What if in the Dune movie, this doesn't work, and Paul is killed in the process of fighting for freedom? Who could take over the galaxy after Paul's death?

Dune 2021 will arrive at a time when the world is questioning and rejecting patriarchal figures. Having Paul die, and perhaps, Chani take his place as ruler of the universe, might actually make a little more sense just from the point of view of what feels better. It wouldn't be faithful to the book, but it could be awesome to see Zendaya as the supreme ruler of everything.

The best part is, in this version, the audience could still have good feelings about Paul, and not end his story as a twisted cult leader, but instead, as a dude who tried to do the right thing.