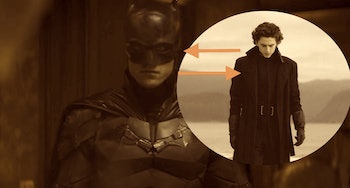 If everything goes according to plan Dune (2020) will hit theaters this December, while the hotly-anticipated movie, The Batman won't come out until next October, in 2021. And yet, as of this writing, we have a trailer for The Batman and not Dune. Is Batman secretly a space messiah planning on leaving Gotham and moving to Arrakis? Probably not, but that doesn't mean Bats didn't give us a clue about the future of Paul Atreides. While we're waiting for the Dune trailer, you might be confused as to why we're talking about The Batman at all. What can The Batman tell us about the new Dune?

A lot, actually. Both movies have the same director of photography in Greig Fein, who previously worked on Rogue One and The Mandalorian. The footage in The Batman looks nothing like anything in Star Wars. So, does Fein's work with director Matt Reeves on the new Caped Crusader give us a hint about the overall cinematic feel of Dune? Maybe. Let's dig in.

In previous interviews, cinemaphotographer Greig Fraser downplayed any connection between the styles in making Dune and filming the Star Wars projects he worked on, saying in June, "I had to forget a lot of Star Wars when I was making Dune." This makes sense: Both projects are space operas, and fans and scholars have endlessly debated the connections between the Star Wars and Dune universes for years.

Whatever Fraser had to learn or unlearn for Dune, must have influenced his work on The Batman — at least a little bit. Right? Based on that, it's possible this new trailer could reveal what Dune fans should expect from the 2020 movie. With that in mind, here are three details from The Batman trailer that could tell us something about Dune.

At a glance, Bruce Wayne and Paul Atreides aren't very much alike, but when you consider that Paul's path to becoming Muad'dib is connected to the death of his father, certain things snap into place. Both Paul and Bruce are children of privilege who become warriors fighting for the downtrodden. Paul does this with some help, and Bruce does this mostly alone, but their motivations certainly overlap. The way Robert Pattinson's Bruce Wayne is shot in the new trailer for The Batman makes him seem young and very concerned over what is going on. He's an adult Batman, but he's not the hardened angry Bats of Christian Bale. There's still some sensitivity to him.

The Batman trailer is memorable primarily because it feels dirtier and more violent than more recent iterations of Batman. Even the Christopher Nolan films seem elegant or beautiful in comparison with the cramped, breakable world we glimpse in The Batman. Will Dune have a similar sensibility? Because of the huge vastness of the planet Arrakis, it seems unlikely those scenes will have much in common with the grim darkness of Gotham City. That said, there are other settings in Dune. The home planet of the Harkonnens, Giedi Prime, could be a very easy analog to Gotham City. The Dune universe also has the planet Salusa Secundus, which, the new film probably won't visit, but you never know. By the time of the first Dune book, Salusa Secundus has a lot in common with that pit Bane came from in The Dark Knight Rises.

The lighting style of The Batman, (based only on the trailer) could be described as "messy." Shadows seem to fall the way they would in real life. Faces are partially obscured. Everything is a glimpse and totally informed by its environment. If Fein uses any of these "messier" techniques in Dune, it could be an amazing gift. One of the most frustrating things about big space opera movies is that they all tend to be filmed like big space opera movies. Terrestrial-based sci-fi flicks tend not to have this problem (see Blade Runner, Dark City, Strange Days) But movies that involve more than one planet tend to take on a grandiose cinematic feeling, which, while somewhat appropriate, cannot often kill any attempt at realism. Some sci-fi filmmakers have actively fought against this tendency by making their films feel cramped on purpose. (Alien and Star Trek II: The Wrath of Khan are two good examples.) But both filmed versions of Dune — the 1984 David Lynch version and the 2000 Sci-Fi Channel miniseries — are decidedly BIG and EPIC in the way the movies are shot.

Could Dune 2020 feel smaller, and thus, scan as more realistic? If Fraser's style in The Batman (and The Mandalorian) is any indication, the answer could be a big yes. Which, for fans of the book series is important. Dune might have some goofy words and phrases — from "the Weirding Way" to Bene Gesserit — but if all of that is going to work in a major motion picture, we're going to need to take it all seriously. And the first step there is that everything in the film seems like it already exists. The biggest problem with so many sci-fi movies it that every frame reminds you you're watching a sci-fi movie. Maybe Denis Villeneuve's direction and Greig Fraser's photography can help Dune overcome its status as a sci-fi epic, and maybe, just be a relatable, realistic movie.