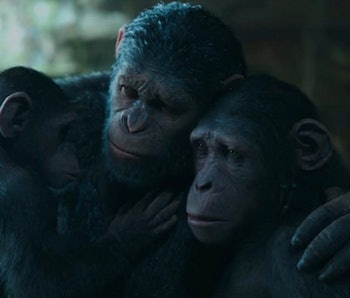 Director Matt Reeves is confident that his new film War for the Planet of the Apes is very different from all the other new sci-fi movies out this summer. As the filmmaker sees it, the story of Caesar (Andy Serkis) and his ape army’s attack is the thinking-person’s blockbuster.

“So many of the other movies that come out this time of year are exciting spectacle,” Reeves tells Inverse. “But we have something extra. It’s been there since the beginning, since the Pierre Boulle book. We’re looking at these intelligent apes, but the metaphor, of course, is that we’re holding up a mirror to ourselves.”

Likening the upcoming movie to Boulle’s other famous work — The Bridge Over the River Kwai — Reeves says that he didn’t have “an overt attempt to be political, per se. But because our main characters are apes, we get to tell a story we wouldn’t otherwise be able to tell. If the main characters weren’t apes, the movie wouldn’t be made. You wouldn’t be able to tell this kind of war story if you didn’t have the cover of making them apes.”

The director feels this meatier philosophical material was a “gift” because “the world of what big studio films are doing now is becoming more and more narrow.”

For Reeves, the “ambition” of War for the Planet of the Apes is to not only dazzle audiences with the overt war conflict in the movie but to have audiences connect with the “war going on in Caesar’s heart.” Reeves admitted this idea is a close paraphrase of William Faulker, who said in 1950 “…the problems of the human heart in conflict with itself [which] alone can make good writing.” Still think these films are only about a bunch of insane monkeys with machine guns?

Reeves says he “wanted to be an ape” as a small child and suggests a connection between War for the Planet of the Apes and the original films. “This was the one moment where they [humans and apes] could have found peace. But because of the 1968 film, we know that doesn’t happen.” While this comment doesn’t confirm that the new franchise will directly connect with the original films, the young girl in the film is named Nova (Amiah Miller), a nod to an adult human woman Nova (Linda Harrison) from the original 1968 Planet of the Apes. Just don’t expect Col. Taylor (Charlton Heston) to come back any time soon.

Charlton Heston may have narrated the recent teaser trailer for War for the Planet of the Apes, but that was an after-the-fact decision. The Heston narration is just part of the intelligent marketing of the film.

“That came from the guys at Fox marketing,” Reeves said. “I thought it announced what we were saying in a smart way that tied us back to the original.”

War for the Planet of the Apes is out in wide release from 20th Century Fox on July 14.