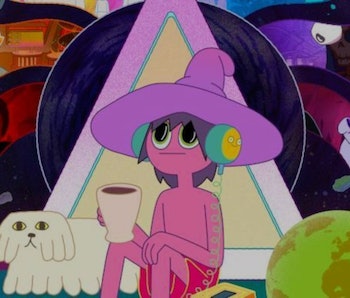 Duncan Trussell is a big fan of psychedelic drugs. “I'll never not love psychedelics,” he tells Inverse. But his thinking on the role and value of drugs like psilocybin (aka, magic mushrooms) has evolved over the years. In an interview for his new Netflix show The Midnight Gospel, Trussell (best known for his popular podcast The Duncan Trussell Family Hour) shared his thoughts on the therapeutic potential for drugs like psilocybin.

“I don't want to cross over into saying, It's good for you like vitamins,” he says, “but I think the data that's coming out right now is showing that when used with therapy, there are really wonderful outcomes for people who suffered from trauma, depression or people who are nearing the end of their life and are terrified of that.”

The scientific community’s understanding of how psychedelic drugs can be used to treat trauma and post-traumatic stress disorder has evolved as well. A recent study published in the Proceedings of the National Academy of Sciences explains how magic mushrooms can “rebalance” the brain by destabilizing pre-existing neuron activity and giving your brain a chance to create new networks at the same time.

"Using this model will be crucial for truly understanding how psilocybin can rebalance neuropsychiatric disorders such as treatment-resistant depression and addiction," Morten Kringlebach, the study's first author told Inverse.

A self-described “Ph.D. from the university of bro science,” Trussell points out that psilocybin is “harmless,” at least compared to other drugs like alcohol, cigarettes, and caffeine. He adds that psychedelics, in general, can help people confront their own trauma (as long as they’re used in the right setting, ideally with some sort of medical expert).

“Trauma just floats there,” he says. “You pretend it's not there, but until you turn and look at that and deal with it, it's going to float there forever. I think that psychedelics, anecdotally, can force the person to look at that thing.”

Trussell is speaking from experience. After being diagnosed with testicular cancer in 2012, he was successfully treated with radiation therapy, but dealing with the trauma took even longer.

“I hadn't confronted my own mortality,” he says. “I hadn't dealt with that properly, and because of that I got really really depressed.”

Through ketamine therapy, Trussell was able to confront the trauma from when he first learned he had cancer. Looking back, he thinks all of his psychedelic experiences have forced him to confront past trauma in one way or another, whether that was tripping in someone’s trailer in high school and “confronting what it is to come from divorce” or a "bad trip” that forces you to deal with some unpleasant memory you’ve been trying to forget.

The most important part of psychedelic therapy, however, is the therapy. It’s one thing to take some drugs with your friends and hope for the best. It’s another to do it with a psychiatrist who can help you through the process.

“Psychedelics are most certainly a very powerful medicine that people can use to heal themselves,” Trussell says, “but I sure hope people don't get the idea that suddenly they've gone to school to study psychology for a decade and then try to give therapy to each other.”

“I'm a dad now,” he adds, laughing. “I'm so boring. In the old days, I'd be like, Yeah man, just eat mushrooms, contact God! Now I'm like, Just talk to your psychiatrist first.”

The Midnight Gospel is streaming now on Netflix.