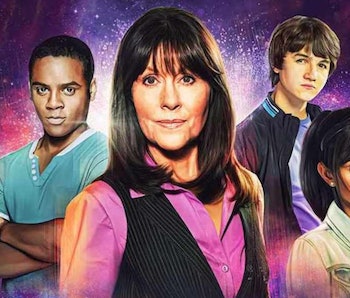 While the rest of the world is at a standstill, the Doctor Who creative team is churning out content to keep fans' spirits up in a time of profound uncertainty. Last week, showrunner Steven Moffat shared a follow-up epilogue to Amy Pond and Rory Williams. Now, Doctor Who's original showrunner Russell T. Davies has penned a heartfelt tribute to a fan-favorite character: Sarah Jane Smith, played by Elisabeth Sladen until her death in 2011.

Sarah Jane Smith was an investigative journalist and companion to the Third and Fourth Doctors. She traveled in the Tardis from 1973 to 1976, when she left The Doctor amicably to pursue some adventures of her own. Elisabeth Sladen reprised her role for many stories after that, and after Doctor Who was rebooted in 2005, the second season episode "School Reunion" was used as a backdoor pilot for her own spinoff, The Sarah Jane Adventures.

The Sarah Jane Adventures aired on the children's channel CBBC, and was many viewers' first introduction to the universe of Doctor Who. Sarah Jane lived in an old house with a supercomputer named Mr. Smith in the attic. She thwarted alien invasions in the West London borough of Ealing with her adopted alien-creation son Luke and neighbors Maria, Clyde and Rani. It ran for four and a half seasons, with Elisabeth Sladen's death on April 19, 2011 ending the show in the middle of its fifth.

Sladen was and is profoundly missed by fans of The Sarah Jane Adventures and Doctor Who in general. CBBC's Newsround received thousands of tributes on the day from young fans. While Sarah Jane's story never got a satisfying ending, the Doctor Who YouTube channel released "Farewell, Sarah Jane," to mark the ninth anniversary of Sladen's passing, providing the end to Sarah Jane's story fans never got.

The short depicts Sarah Jane's memorial service using an innovative filming technique: a narrator reads the text, with monologues interspersed throughout filmed by various actors reprising old roles. Fellow companions Jo Grant (Liz Manning) and Dorothy "Ace" McShane (Sophie Aldred) paid their respects. Countless other companions were mentioned in the narration as well, all the way back to Ian and Barbara, the very first companions on the show.

These mentions also confirmed a widely believed fan theory: companions Tegan and Nyssa are mentioned as a couple, retroactively providing LGBT representation to 1980s British television, which is no small feat. It's also revealed Martha and Mickey now have a son, August, and Jo Grant has a granddaughter named Rio de Janiero. It's all the fanservice you could hope for in an epilogue.

The most heartbreaking monologues came from Sarah Jane's protégés. Clyde, now a successful cartoonist, talks at length about the importance of Sarah Jane's belief in him. Luke explains that Sarah Jane was his best friend, in addition to being his mother. She even set Luke up with his husband of five years. Rani closes out the short by explaining how she refuses to believe Sarah Jane is truly gone, instead, she maintains The Doctor swept her away, where she'll travel forever.

Yes, the short was heartbreaking, but it was an important catharsis that fans who grew up idolizing Sarah Jane have needed for nearly a decade.