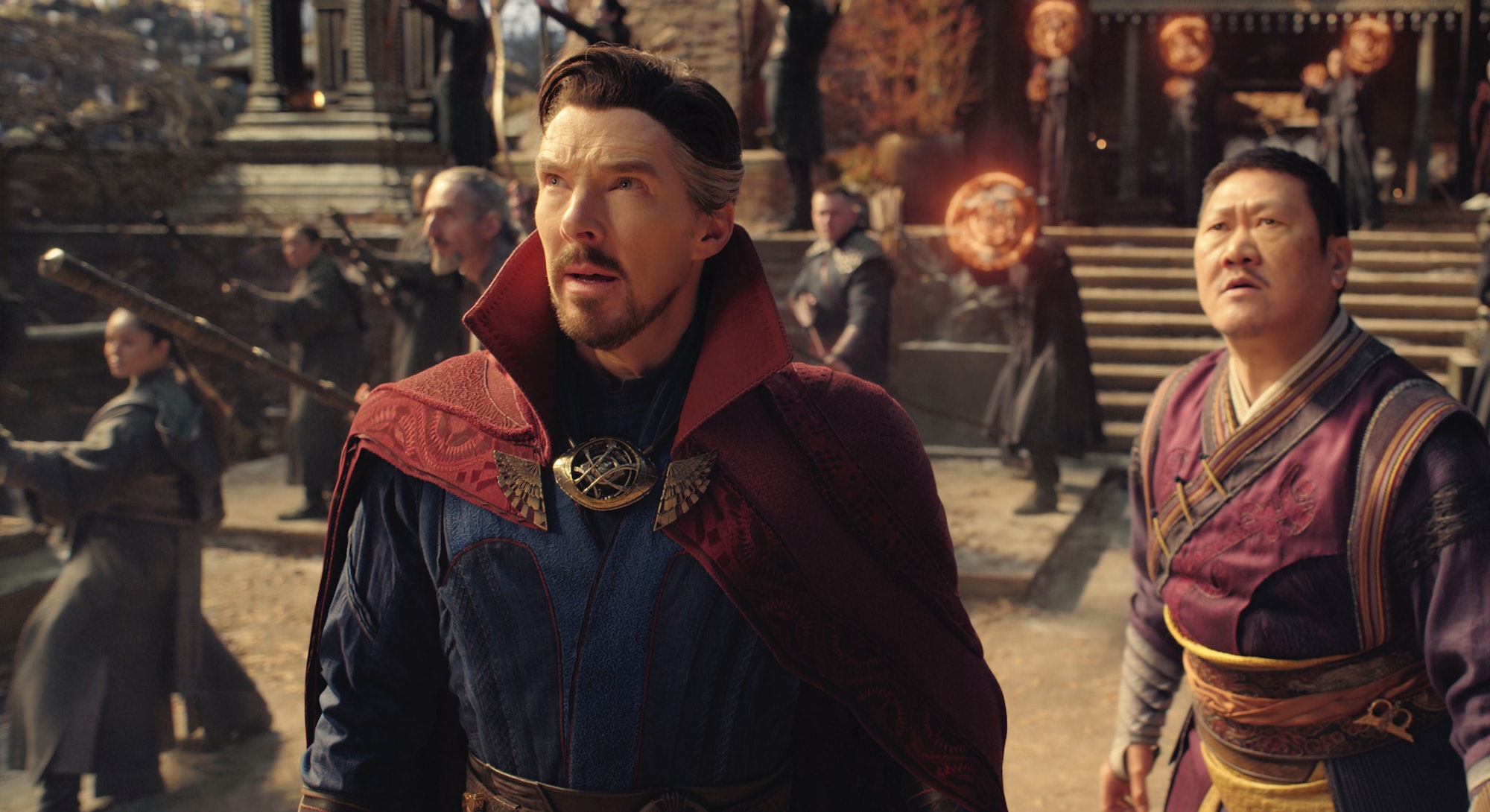 What do Batman, Spider-Man, Lara Croft, Harry Potter, Indiana Jones, and Doctor Strange all have in common? Their costumes have been designed by Graham Churchyard.

Since starting his Hollywood career on the set of the 1979 horror classic Alien, UK-based costume designer Graham Churchyard boasts a resume that resembles an action figure collector’s shelf.

Since 2011, he’s lent his talents to the Marvel Cinematic Universe, starting with Captain America the First Avenger.

“I set up a workshop where we made the Captain America costume,” Churchyard tells Inverse. “It was a small team, to be honest, between six and 20 people. Whereas Multiverse of Madness, there were like 160 or 170 people just filling up the space making stuff.”

For years Graham has been Marvel’s go-to costume guy for productions in the UK, spanning movies like Thor: The Dark World, Guardians of the Galaxy, and Spider-Man: Far From Home. The Doctor Strange sequel “was a new hat,” he says, “[Multiverse of Madness] was tough for all the makers, people doing all the embroidery and printing and distressing and cutting, and [incorporating] changes that go along. I loved every moment of it.”

In an interview with Inverse, Churchyard breaks down some of the most memorable costumes in Multiverse of Madness, from changes to Doctor Strange and the Scarlet Witch to some surprising new heroes. (Spoiler alert: the Professor X in Doctor Strange 2 was directly inspired by X-Men: The Animated Series, and it was Kevin Feige’s idea.)

Taking inspiration from her comic book design, Churchyard outfitted America in a denim jacket, jeans, and sneakers — a casual outfit that wouldn’t look out of place at the mall. But the jacket provided an opportunity for director Sam Raimi to ensure America stands out.

“Sam wanted the star,” Churchyard says, “He had his editor’s hat on, as it were. He wanted the star to be the thing that stood out [in] that moment when she’s walking down the street, or in the cold opening.”

In earlier versions of the script, Graham says America lived in orphanages in the multiverse, where she would personalize her jacket with song lyrics or poetry.

“I had busier versions which almost looked like someone had taken a spray can and graffitied some design,” Churchyard says. “All kinds of expressions that have to do with like a teenager’s angst.”

But at the insistence of director Sam Raimi, Churchyard toned down the jacket to the final version seen on screen, though there’s still some inscriptions if you look close enough.

“I was tempted to give her a different personality like she’d have a heavy metal t-shirt of a band she’d seen in the multiverse,” he says. “But Sam found that distracting. So I took the detail to a very subtle level. The jacket’s covered in Spanish poetry, and some Portuguese witchcraft.” Her t-shirt, too, changed into a subtle tee with Day of the Dead designs of snakes and skulls.

The final touch came in the form of America’s Progress pin, which was added at the last minute. “In the first script, there was no comment about where she’s going in the MCU. I think we did a kind of subtle start to it,” Churchyard reveals.

He was encouraged to add the Progress pin by Richie Palmer, a former Marvel production assistant who has since graduated to development. “Richie Palmer said to me, ‘Yeah, do it put it on,’” he says. “It allows enough to be shown where the character is going in the MCU.”

Elizabeth Olsen’s Wanda (aka, Scarlet Witch) returns from 2021’s WandaVision in a more sinister version of her most recent costume.

Churchyard had a preview of Elizabeth Olsen’s costume in March 2020, when production on WandaVision had just begun. “It was only a fragment [that we saw], but when Sam and I looked at the footage, we said we better go back to the studio, because it doesn’t fit with our script where she is in possession of the Darkhold,” he says.

Describing Wanda’s costume in the WandaVision finale as having a “softer” look, Raimi and Churchyard came up with the idea of a “multiversal mold,” a creepy effect that added plenty of texture to an unstoppable Scarlet Witch.

“We came up with the idea of this multiversal mold that grew over people if they were in possession of the Darkhold,” Churchyard says. “That’s what the costume was. We took the WandaVision costume and created these sleeves, to show there’s a sort of progression going up the arm, this creeping distress and corruption into the rest of the costume.”

There were other changes, too. The skirt was made lighter to make it flow easier, and the vibrant red coloring was mixed in with black undertones. Finally, there was Wanda’s tiara, which was given a new design that looked especially eerie under certain light.

“It’s a clear casting, the urethane it’s made out of, there are moments where the light hits through it, you can see light passing through it that gives it an otherworldly quality,” Churchyard says. “It’s a sort of transparent, unknown material.”

In a throwback to Churchyard’s start on The First Avenger, Churchyard designed the costume of Hayley Atwell’s Captain Carter.

“Because I’d worked on First Avenger and with Chris Evans, and on Age of Ultron remaking that costume, I’m aware of all the versions that have happened up to Endgame,” Churchyard says.

“The female version of Captain Britain.”

Churchyard took cues from the first MCU animated series, What If..? on Disney+, and added references to the comic book hero, Captain Britain.

“We took the influences from What If..? and Ryan Meinerding’s illustrations and built kind of the female version of Captain Britain, an enormous guy in the comics. The What If..? thing just gave us a whole flipped version. I tried not to go too 1940s with it and bring it forward [to the present] slightly.”

Due to her schedule filming the seventh Mission: Impossible, Hayley Atwell was only available for a few fittings, “but we nailed the costume in the end and she was thrilled with it.”

Given that Lashana Lynch’s costume as Captain Marvel resembles Brie Larson’s, one could assume creating it was a cinch. But like the multiverse itself, it was actually a complicated ordeal.

“We built that whole thing from scratch,” Churchyard says. “We really, really tried to perfect that costume. There were design changes that were needed.”

In order for the costume of Captain Marvel to fit Lynch, the crew constructed a 3D model of the actress that they reprinted into a mannequin.

“We’re building the costume on it. Then we fitted her like six or eight times.”

Stewart’s Xavier suit was commissioned from Savile Row, a prestigious British brand of men’s suits. “Made from scratch in London and sent to his home in LA,” explains Churchyard on the process of suiting Professor X. “He was working on Picard Season 2, we did a Zoom fitting with him. He loved it because it was Yorkshire woolen fabric. His mother had worked in the mills back in the day. He was thrilled to get a proper Savile Row-made suit.”

“There was no question he was that character in the animated series, with the yellow wheelchair.”

According to Churchyard, it was Marvel’s Kevin Feige who insisted that Xavier resemble his appearance from the iconic ‘90s X-Men: The Animated Series.

“Kevin had given us the inspiration from the get-go,” he says, “There was no question he was that character in the animated series, with the yellow wheelchair. We did the green suit and striped tie. Kevin was thrilled we recaptured the green suit, because that was the vibe he was trying to bring to the screen.”

One of the most intricate costumes for Churchyard was Doctor Strange himself, played by Benedict Cumberbatch.

More specifically, his Cloak of Levitation, which appears with a new look in Multiverse of Madness, went through a difficult process in order to achieve its velvet look.

Part of the complexity lies in the cloak’s asymmetrical design. “It’s kind of up on one shoulder,” says Churchyard. “Each graduating panel starts kind of wide, then gets smaller as it goes.” Throw in some embroidery, printing, and “very intricate checkerboard lining,” and you’ve entered a whole new dimension of costume design.

“Printing and matching the fabric is very elaborate,” Churchyard says, “If you could ever see it in person, the edge [of the cloak] is this combination of embroidery and printing and just so many techniques [that] has to be graduated and controlled around where the border gets thinner and wider. I don’t know if I’m explaining how elaborate it is, but it’s extreme.”

The fabric itself was sourced and woven in Japan, “then it was flocked with a special electrostatic process where you screen print onto fabric. And with a Van de Graaff generator, you apply flock. It’s very complicated.”

Doctor Strange in the Multiverse of Madness is now streaming on Disney+.