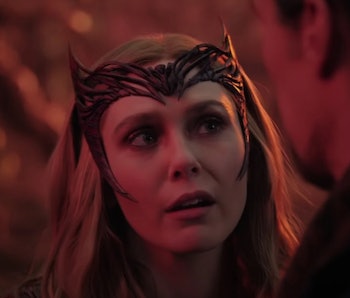 In case you haven’t already heard, Wanda Maximoff (Elizabeth Olsen), while under the sway of The Darkhold, goes on a rampage across Earth-838 in Doctor Strange in the Multiverse of Madness.

Spoilers for Mulitiverse of Madness ahead.

Her unfortunate victims include Professor X (Patrick Stewart), Mr. Fantastic (John Krasinski), Captain Carter (Hayley Atwell), Captain Marvel (Lashana Lynch), and Black Bolt (Anson Mount). But what if Franklin Richards and Valeria Richards, the biological son and daughter of Mr. Fantastic and Invisible Woman, had been at the scene of Wanda’s massacre of the Illuminati? Movie and television aficionado Juju Green (@straw_hat_goofy) has a fascinating theory they posted to TikTok about the Fantastic Four’s honorary kid members.

Green explains that viewers of Doctor Strange 2 should have taken Krasinski's brief lines as Reed Richards more seriously. As he tries — and fails — to negotiate with Scarlet Witch, Mr. Fantastic tells Wanda that he know how she must be feeling, because he has two children and understands the lengths a parent would go to in order to keep their kids safe.

Reed’s son, Franklin Richards, was creating pocket universes by the age of four. He’s telekinetic and can manipulate reality to an incalculable extent, while his little sister, Valeria, is quite possibly the smartest human ever born. If Franklin and Val had stepped in to help their father, Green posits that Wanda wouldn’t have stood a chance. She can only manipulate reality, while Franklin can create it.

Who are Franklin and Val Richards?

Franklin and Val are the children of Mr. Fantastic and Invisible Woman, and would be a teenager and a tween, respectively, on Earth-838. The source of Franklin’s powers are complicated, but he can warp reality and finagle with the molecular structure of beings, objects, and entire universes. In the past, he’s defeated Mephisto, Galactus, and Ultron with ease. He can also use telepathy, knock someone out with his mind, release psychic bursts, and levitate. So he’s handy to have in your corner.

Val’s backstory is complicated, but she’s a brilliant child. By the age of two she’s solving Rubik’s cubes and playing chess.

Some fans in the comments on Green’s TikTok post were skeptical of this theory, pointing out that Franklin is a self-professed pacifist who only defeated foes out of a fear that led to him losing control of his powers. Val, the goddaughter of Victor von Doom, seems the more plausible vengeance seeker, but on her own she’s only human.

The Inverse Analysis— Juju Green’s hypothetical scenario couldn’t have played out in Doctor Strange in the Multiverse of Madness without wrecking the plot’s already thin foundation, but there’s no reason why a Franklin Richards versus Wanda Maximoff showdown couldn’t occur in a future MCU project.

But such a confrontation, if it were to ever transpire, is likely several years away. The MCU will first have to successfully introduce the Fantastic Four in theaters, a task that’s already gone south twice, and then they’ll have to integrate their progeny into the mammoth franchise. Still, plans for both are underway, so if you’re hoping to see your Illuminati favorites get justice, stick around for Franklin and Val.

More like this
Entertainment
Jan. 26, 2023
Corey Stoll could have the chops to make a live-action M.O.D.O.K. work
By Mónica Marie Zorrilla
Entertainment
Jan. 25, 2023
The MCU could bring back a hero from its most underrated TV show
By Dais Johnston
Entertainment
Jan. 30, 2023
The Last of Us Episode 3 Features One Subtle Video Game Easter Egg
By Alex Welch
LEARN SOMETHING NEW EVERY DAY.
Related Tags
Share: