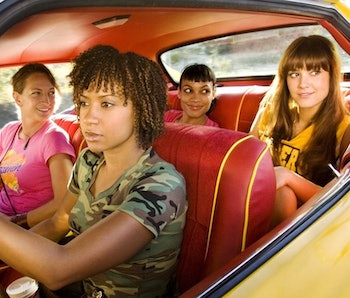 Having post-modernized everything from the heist movie to samurai cinema with universally fawning results, Quentin Tarantino was perhaps due a backlash. As one half of the Grindhouse double bill that also featured Robert Rodriguez’s Planet Terror, 2007’s Death Proof bombed at the box office: It placed fourth behind a wretched sequel no one asked for (Are We Done Yet?) with a dismal opening weekend gross of $11.6 million.

Most critics felt the director spent more time painstakingly recreating the aesthetics of 1970s exploitation flicks than working on plot, characterization, or the one element you could previously guarantee from a Tarantino picture: Highly quotable dialogue. Even he’s since admitted that it’s the worst movie he’s made.

But given the game-changing standard of his filmography, that’s not a particularly damning indictment. In fact, in the 15 years since its ambitious release strategy, Death Proof has not only enjoyed something of a re-evaluation, but continually infiltrated pop culture in the manner of Tarantino’s more celebrated work.

Based on the murderous exploits of a sadistic stuntman, Death Proof still has its problems. The trivial conversations that dominate the calm before the carnage lack any verve or wit. There’s certainly nothing here to rival the “Royale with Cheese” musings of Pulp Fiction or the “Like A Virgin” discussion in Reservoir Dogs. And Tarantino regularly surrenders to his biggest self-indulgences: A pointless cameo as a shot-drinking sleaze, an over-reliance on profanity, and enough foot footage to fill a fetish film.

But Death Proof’s simplicity often works in its favor. This is Tarantino’s first entirely linear film, and although we can guess that things are going to turn ugly as soon as Kurt Russell’s Stuntman Mike and his skull and lightning bolt-adorned Chevy Nova enter the picture, not knowing exactly when and how imbues its dive bar scenes with a nail-biting tension.

And when Mike does embark on his first reign of terror, the brutal carnage of a high speed head-on crash is as spectacular as it is shocking. Taking on the cinematographer’s role for the only time in his career, Tarantino frames the massacre in gruesome slow motion, repeatedly rewinding to the point of impact to give each character their own brutal send-off. It’s ridiculously gory, but it’s also one of the most impressive set-pieces in the auteur’s canon.

The same is true of the second act’s thrilling car chase, which makes all the inane gas station chatter worth sitting through. Tarantino has blasted the overuse of CGI in modern-day Hollywood, citing 1992’s Terminator 2 as the last bastion of practical vehicular stunts. And with the inspired casting of Kill Bill stuntwoman Zoe Bell, the director was able to put the likes of the Fast and Furious franchise to shame.

Bell certainly doesn’t give up the day job, with her namesake forced to desperately cling to the bonnet of a full-speed 1970 Dodge Challenger Mike railroads from every angle. Tarantino draws every bit of mileage out of this horrific scenario, pushing Bell’s daredevil spirit to its limits over the course of a thrilling 15 minute cat-and-mouse game before the prey, initially indistinguishable from the first set of victims, gets to become the hunter.

Fulfilling the John Travolta, Pam Grier, and David Carradine career-reviving casting brief, Russell ends the film getting savagely beaten to death. Still, he appears to be having the time of his life as the boo-hiss villain whose maniacal laughs eventually turn into pitiful whimpers. And while the constant visual tricks — the jump cuts, the deliberately damaged shots, the sudden shift into black and white — are essentially a form of movie education showboating, they do help recapture the whole sticky-floored, rundown cinema vibe.

Despite its less than stellar reputation, Death Proof has left a significant cultural imprint. Most obviously, Machete and Hobo with a Shotgun, two of the five fake trailers that played before each showing, were adapted into real feature films. There are also traces of the film’s DNA in the hyper-violent stuntman tale of Nicolas Winding Refn’s cult classic Drive, the gratuitous thrills of Nicolas Cage’s Drive Angry, and the grainy recreation of 1970s America in Ti West’s X.

And it’s not just on the big screen where Death Proof has reignited an interest in exploitation. Syfy’s Blood Drive and Netflix’s Sky Rojo both serve up similar road-based havoc, with the latter even borrowing the film’s table-turning chase. Paying homage to the lap dance scene that was in the reel “missing” from the theatrical cut, Iggy Azalea’s “Work” joined Rihanna’s “Bitch Better Have My Money” and Lady Gaga and Beyoncé’s “Telephone” on the list of promos that took their cues from the grindhouse homage.

Of course, by once again casting Russell and Bell as stunt coordinator, Tarantino also tipped his hat to the throwback in 2019’s Once Upon a Time in Hollywood, the latest of four films he made after Death Proof. No doubt the filmmaker would still consider Death Proof to be his nadir, but it still contains enough of his genius to merit a place in his legacy.

More like this
Culture
Jan. 25, 2023
Hansel & Gretel: Witch Hunters is a flashback to the strange excesses of 2013
By Mark Hill
Culture
Jan. 23, 2023
5 years ago, DC released the best Batman movie you haven't seen
By Laura Kelly
Culture
Jan. 31, 2023
Final Destination 2 Perfected the Art of the Gross-Out Kill
By Jon O'Brien
LEARN SOMETHING NEW EVERY DAY.
Related Tags
Share: