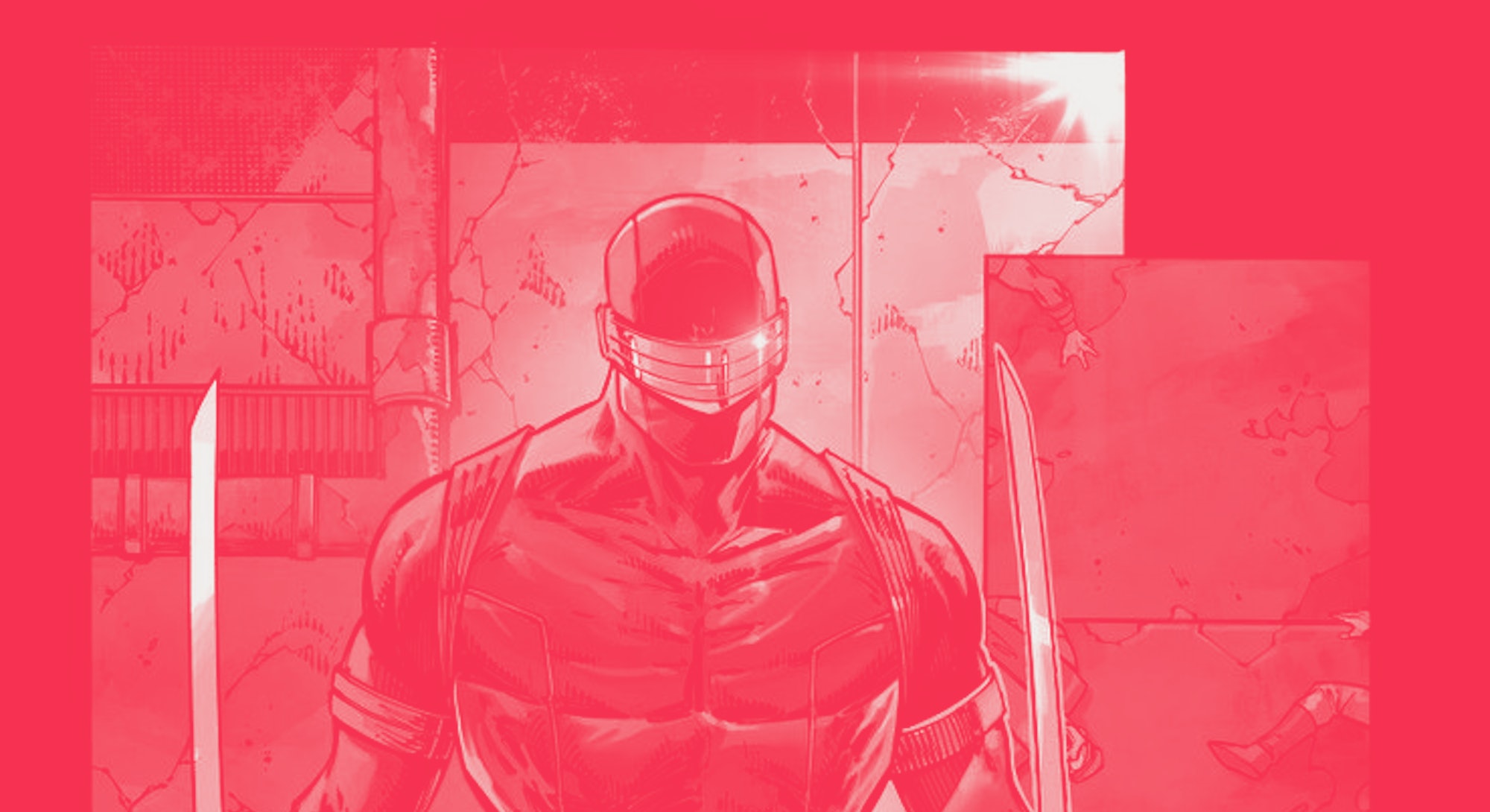 If you're into wisecracking mercenaries and edgy comic book violence, the name Rob Liefeld carries a special brand of magic.

His meteoric success has been a wild ride fueled with muscle-bound crusaders, a gonzo '90s-era art style, and outrageous action. As creator of the X-Force, Deadpool, Cable, Domino, and Prophet (among others), Liefeld's unbridled enthusiasm and influence on the comics medium continues today in the Deadpool feature film franchise and beyond.

“People ask about Deadpool 3 all the time and I feel guilty,” he tells Inverse. “I don't know if they're ever going to do Deadpool 3, and part of me doesn't care! I got to feast at the table of these two brilliant movies."

Prolific? Indeed! Beginning in 1989, Liefeld became one of the youngest artists to ever wield a pencil in the Marvel bullpen on titles like X-Factor and The New Mutants. Meteoric success followed until 1992, when a cadre of talent made a headline-grabbing exodus from the House of Ideas to found Image Comics. Liefeld joined fellow artists Jim Valentino, Erik Larsen, Jim Lee, Mark Silvestri, Whilce Portacio, and Todd McFarlane with ambitious plans for their enterprise.

Youngblood was the renegade publisher's first official release, written and drawn by Liefeld. It holds the distinction of being the biggest selling indie comic of its time and introduced the idea of superheroes as sponsored celebrities later seen in Garth Ennis and Darick Robertson's The Boys.

Nowadays, Liefeld is a California-based family man, but his hunger to craft killer comics never abated. This summer, IDW Publishing will release Liefeld's biggest project in years, a solo miniseries spawned from the world of G.I. Joe and starring that mute mercenary, Snake Eyes.

For Liefeld, the character is an obvious extension of the work he’s done with Marvel.

"Look, Snake Eyes is the Wolverine of G.I. Joe,” he says. “He's the Deadpool of X-Force. He's the character that people naturally migrate to. He has a mystery about him and he's just cool. If it doesn't look cool, people generally aren't interested in it."

Inverse chatted with the controversy-stoking creator about navigating the creative waters of the 21st century, how Snake Eyes influenced the creation of Deadpool, inheriting the title of the "Godfather of Pouches," and what his version of the black-garbed ninja commando will be when the premiere issue arrives in June.

What did the G.I. Joe brand mean to your youth, and why is this the perfect time to resurrect the franchise in comics?

G.I. Joe is an iconic, giant pillar of my youth in toys and comics. I know we're in the midst of a line-wide reboot; I really believe we're going to get more people picking this stuff up, and obviously, it's going to be flanked by these movies and a new line of toys. We're storming the beaches, you know? It's great!

How did this Snake Eyes project come together at IDW and what were your goals for the popular character's solo spotlight?

Chris Ryall is a good buddy of mine. He called me last spring and said, "Hey man, we should do G.I. Joe: Snake Eyes. Let's make it happen." I'd done some Snake Eyes and G.I. Joe covers for IDW over the last couple years, so we decided to stop talking about it, get to doing it, and getting it on a schedule. I told him this was the story I'd like to do, and he got clearance from Hasbro and here we are. I don't feel like I'm 52, and in my heart, I'm ten. I can access the sandbox memories like they were yesterday.

For me, G.I. Joe was the first toy I remember interacting with and for me it was Kung-Fu Grip, Eagle-Eye, and all that stuff. Then the license transitioned and just blew the doors off in the early '80s, and I was there for that, too. So, it was my first toy in the '70s, and then it was my last toy on the way out before I grew up, got into girls, and didn't play with toys as much. Then I made my career in comics, and toys were back on the table. I hadn't interacted with G.I. Joe in a formal fashion beyond some covers in a while. If you can tell me how I became the Godfather of Pouches when you've got G.I. Joe around, I'm still not sure how I pulled that off. (laughs)

This is just pure sandbox to me and I'm thrilled. The execution is at a high level. The early reaction was beyond anything I anticipated. I think we're moving in the right direction at the right time.

Drawing Snake Eyes, did you make any modifications or enhancements to the classic costume and what was your take influenced by?

Well, Snake Eyes was a direct influence on the visual language of Deadpool. I've been doing this for 34 years now, but especially over the last decade, I'll go into a comic book store if I'm out of town, and guys will go, "Oh, man, I want to tell you how much I love Deadpool and all that Snake Eyes ninja badass shit that he had going on." Cable was my big military guy, and when I brought in Deadpool, he moved differently. He was my ninja and had guns and swords… and that's because Snake Eyes had guns and swords. So I can immediately transition to Snake Eyes, no problem whatsoever.

If I was going to do a character like Superman, it would take me a couple issues to find my grasp of him. Snake Eyes, I'm just sticking to the model, man. That is one great looking character. He's a blast to depict and I'm having a killer time drawing him, putting him through his paces. He's in over his head pretty quickly in this story and my obsession with Eagle-Eye and Kung-Fu Grip G.I. Joe is very prevalent in this as the team makes its appearance in the first issue. I'm bringing all my childhood touchstones and my passions. At this stage of my career, I'm only interested in bucket list stuff. I like where my work's at, and my fans seem to like where my work's at.

My older son, he's nineteen and he's aware of Snake Eyes and G.I. Joe because he was nine when he saw the movie and he interacted with the revisionist Renegades cartoon when he was six. But my youngest son asked why I'm doing this. So we sat down and watched The Toys That Made Us on the story of G.I. Joe. I wanted him to know the history of this and why I'm so passionate about it. If I can use my juice to help expose G.I. Joe and Snake Eyes to a new generation, that's a thrill. In that way, it's like 1996 when Marvel said, "Hey, Captain America and The Avengers used to be top sellers for us, but we're having a hard time breaking them through in this world dominated by Spider-Man and X-Men."

And just like I rolled up my sleeves on that, I'm rolling up my sleeves here. I really believe Snake Eyes is going to have great reach and great reception. Obviously I'm very confident.

With this miniseries landing in June and a Snake Eyes feature film arriving in October, what transpired to bring this character to the front lines of G.I. Joe's world and why did it take so long?

So, going back to The Toys That Made Us, the great thing is that Snake Eyes, who was a happy accident, became the number one G.I. Joe figure when it shipped. It was the last character because Hasbro needed to fill the assortment, and they'd blown the budget. So they thought, “Hey, let's make this unpainted figure with a different head.” I can tell you, we all wanted to buy Snake Eyes, you know? Commando! Snake Eyes! He's always been the one that gets people most excited.

I learned about the new movie after this project began. The comic books matter to Hasbro. I think they see comics as the ground forces storming the beach, and the movie as the air support flying in overhead to drop the heavy bombs. That's how I look at it. The movie announcement really excited me — especially starring Henry Golding and with the main focus on Snake Eyes.

Look, Snake Eyes is the Wolverine of G.I. Joe. He's the Deadpool of X-Force. He's the character that people naturally migrate to. He has a mystery about him and he's just cool. If it doesn't look cool, people generally aren't interested in it. When I was a ten-year-old kid and the second wave of Star Wars figures came out with that Boba Fett mail-in, I cut out my proof-of-purchases and mailed them. I waited every day for three months and finally a little white toothpaste box came with my Boba Fett figure… and there was no other favorite until Snake Eyes.

Snake Eyes is a great looking visual. I can tell you as the guy putting him on paper right now, he doesn't have a bad angle. Every shot looks cool. You can't draw this character not looking cool. I'm just happy to be delivering a series focused on him. And Scarlett will be there, Storm Shadow will be there, my '70s G.I. Joe Kung-Fu Grip dude will be there. And some big surprises, too. I've got a brand-new bad guy. And that's all the stuff I had to get cleared from the get-go. But Hasbro cleared everything on the table, and there's going to be some really wild stuff coming at you.

You sound extremely happy and rejuvenated with this Snake Eyes mission. What was the greatest reward for you as a family man and veteran creator?

The greatest reward is seeing the pages after I draw them, I ink them, I send them to my colorist, and he sends them back. It's seeing the final product. My son, as he left for his sophomore year of college in August, put his hand on my shoulder in my office, and he said, "Dad, what does it feel like never having to grow up? All you've got is toys and comics all around you."

I'm proud to be part of the guys that gave comics a giant shot in the arm, and, like you said, there's a '90s nostalgia vibe going on. I meet fans at the shows and they're dads now. They bring me their nine-year-olds and their six-year-olds. They're thrilled; I see it in their eyes and we have that connection. I love doing the work and they love seeing the work, and that's never changed.

We direct these little movies on paper because that's what they are. I ask my kids all the time, "What does Dad love?” And they go, "We know, Dad. Comic books. Comic books."