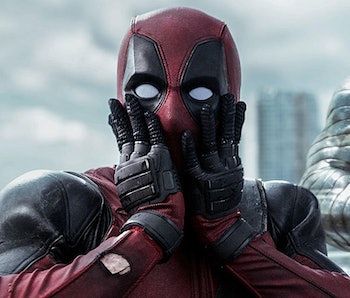 The first two Deadpool movies were wildly meta and full of R-rated language and violence that made even the edgiest of Marvel films look tame in comparison. Now the era of Deadpool being a 20th Century Fox production is over. Months after Disney officially acquired the studio, it announced that Deadpool 3 was in development at Marvel Studios.

Naturally, fans began speculating the Merc with a Mouth could be rolled into the Marvel Cinematic Universe. Ryan Reynolds recently commented that Deadpool 3 being part of the MCU would be “explosive,” but we think Wade Wilson shouldn’t be in the MCU at all. Here's why.

In a May 5 appearance on The Tonight Show Starring Jimmy Fallon, the host asked whether Deadpool and the MCU would combine. Considering that Deadpool 3 is still in the early stages of development, the response wasn’t a straightforward yes or no. However, Reynolds did discuss the possibility of Deadpool joining the MCU. Here’s what he told Fallon:

“I see so much, I see infinite possibility in either version, you know? If Deadpool were to be in the Marvel Comic Universe I think, or the Marvel Cinematic Universe rather, I think it would be explosive, and amazing, and what a sandbox to play in. If Deadpool continued to get to just do his own thing, and be his own thing, also just like infinite possibility."

Honestly, the latter option sounds a whole lot better. Deadpool should absolutely “do his own thing.” The MCU has produced many fantastic standalone movies, depicting a myriad of heroic journeys and epic adventures that culminated in a phenomenal battle against Thanos. That said, Deadpool being roped into the MCU format would likely dilute his character and rob the third Deadpool film of the freedom to be as raunchy, rebellious, profane, and over-the-top as possible.

Spider-Man’s introduction into the MCU is a perfect example of what could happen here. On his own, Peter Parker was a man of the people, the friendly neighborhood Spider-Man who tried his best to help with what he had (and he never had too much). However, under the MCU’s umbrella, Spider-Man became little more than Tony Stark’s mentee, with billions of dollars worth of technology and resources at his disposal.

Swinging with the Avengers took away a fundamental part of Peter's character, and his personal struggles and heroics turned into a mere extension of the MCU’s overarching storyline. Similarly, the MCU’s version of Peter Quill is funny and a bit of a goofball rather than the sarcastic, disillusioned war veteran he was in the comics.

Deadpool might suffer the same fate if Deadpool 3 is folded into the MCU. Marvel’s films have had their fair share of violence, but none of the movies come remotely close to the gore and obscenity of Deadpool. Would it be cool to see Wade Wilson interact with the rest of Marvel’s heroes? Absolutely. There's nothing wrong with a few cameos here and there, but we need to keep Deadpool weird.

Still, it’s hard to imagine such a starkly independent, foul-mouthed and violent mercenary could ever water himself down enough to fit into the MCU mold. Fingers crossed Deadpool 3 remains a standalone film.

Deadpool 3 doesn’t yet have a scheduled release date.