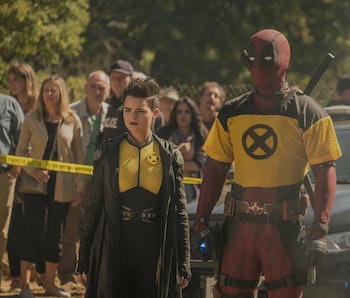 There are many ugly realities when it comes to the historic Disney-Fox merger. But for fans, the merger means the X-Men are about to “return” home to the Marvel Universe. And by X-Men, we also mean Deadpool.

On late Monday, Ryan Reynolds blew the internet’s collective minds by posting an Instagram photo at Marvel Studios’ offices. There were no official announcements or big declarations. Just a snarky caption about “auditioning” for the now-vacant role of Tony Stark that is signature Reynolds.

“Auditioned for the role of ‘Anthony Stark,’” Reynolds wrote. “Didn’t come even remotely close, but the nice man with the taser escorted me to the ground.”

Of course, Reynolds is hiding why he actually paid a visit to Disney-owned Marvel Studios, but we can already guess. With 20th Century Fox, the studio that produced and distributed Reynold’s hit Deadpool movies, now under control of Disney, it is likely formal discussions have begun for a third Deadpool, possibly set in the Marvel Cinematic Universe.

This is big! If Deadpool joins the MCU, then the MCU — one of the biggest, most influential Hollywood film franchises of all time with no signs of slowing down — finally has its own jester. (Yes, Loki exists, but even Loki doesn’t make amazing Green Lantern jokes or dance to Celine Dion.)

The novelty of Deadpool in the same continuity as the Avengers needs no overwrought explanation. Reynold’s foul-mouthed killer has starred in two mega-hit blockbusters: 2016’s Deadpool and 2018’s Deadpool 2 that proved there’s an eager audience for R-rated superheroes. To have Deadpool rub elbows with Captain America and Spider-Man (as he’s done in the comics) is just the kind of crossover Marvel fans salivate over.

But there are still bigger questions about Deadpool 3, the franchise’s R-rated hallmarks, and its new place in the family-oriented Marvel Cinematic Universe that includes the censor-prone Chinese theatrical market as a key source of revenue. Simply put, can Deadpool work in a PG-13 ecosystem? The answer is actually a pretty solid yes, even if it slightly dulls Deadpool’s edge.

We’ve previously seen the humorous PG-13 edit of Deadpool 2, which opened to China and grossed over $40 million despite Chinese audiences having never seen the first Deadpool. While the PG-13 version obviously contained less vulgar humor and cussing, the edit proved that Deadpool can still engage and entertain even with all the restrictions in place. And honestly, Deadpool has always been more fun as a character who works against the odds than having the odds in his favor.

And there’s no hard and fast rule that Marvel won’t still make R-rated Deadpool movies. Back in August, Variety reporter Brent Lang tweeted based on sources that there is internal back-and-forth over whether Deadpool can have R-rated solo movies and still appear in PG-13 Avengers movies.

And if there’s anyone in the Marvel Universe who can change to the whims of his creators, it’s Deadpool.