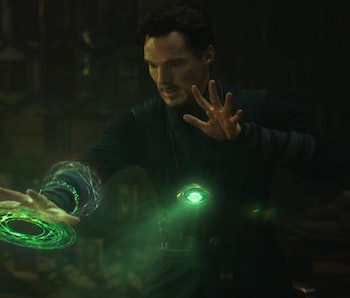 The multiverse is full of madness, and it will be scored by Danny Elfman.

In a wide-ranging interview with Inverse about his newest single "Love in the Time of Covid," a dark rock song about love, lust, and lack thereof in a year of lockdowns, Elfman confirmed he is scoring the 2022 movie Doctor Strange in the Multiverse of Madness with director Sam Raimi.

"I am starting to do bits of pre-work for Doctor Strange 2 that Sam Raimi's directing," Elfman tells Inverse. "Even though I don't start it for some months, there's bits of recorded music they need for the sets."

“I am starting to do bits of pre-work for Doctor Strange 2.”

Naturally, Elfman couldn't reveal too much about the new Marvel Studios movie slated for release on March 25, 2022. But the film will mark a reunion between Elfman and Raimi, who first worked together on the 1990 superhero noir Darkman followed by Spider-Man in 2002 and Spider-Man 2 in 2004. Disagreements between Elfman and Raimi led to the musician exiting the franchise for 2007's Spider-Man 3. In the years since, the two mended fences and collaborated once more for the 2011 Disney fantasy film Oz the Great and Powerful.

Elfman also scored the movies Batman (1989), The Nightmare Before Christmas (1993), Mission: Impossible (1995), Men in Black (1997), and Dumbo (2019), and Avengers: Age of Ultron (2015). He is known for his frequent collaborations with directors like Raimi, Tim Burton, and Gus Van Sant. Prior to his acclaimed film work, Elfman was the singer-songwriter of the new wave band Oingo Boingo.

What's extra interesting about Elfman's involvement in Doctor Strange is the concept of the multiverse. While exact details are unknown, it is widely speculated the "multiverse" will create a convergence of past Marvel film franchises — specifically the different versions of Spider-Man.

It has thus far only been rumored (and not confirmed) that Tobey Maguire — whose first two Spidey films Elfman scored — will reprise his Spider-Man in Marvel and Sony's third, untitled Spider-Man scheduled for December 17, 2021. (Actors Alfred Molina and Jamie Foxx, both of whom played villains in past Spider-Man films, are reported to return in their roles as well.)

Elfman's involvement in Doctor Strange in the Multiverse of Madness suggests that Raimi is bringing as many touches of his Spider-Man films to the Marvel Cinematic Universe as he can. And while it doesn't confirm cameos, fans can be assured that the unmistakable spirit of Raimi's movies will live on in the MCU.

Meanwhile, our full interview with Danny Elfman is not one to miss and is coming soon. In the interview, Elfman speaks openly and honestly about living through a difficult pandemic year. His newest single "Love in the Time of Covid," which explores the aggravating yearning for physical intimacy in a time of social distancing, is available now with a music video from German director Sven Gutjahr and trans performer Shrek 666.

Watch the music video for "Love in the Time of Covid" below.