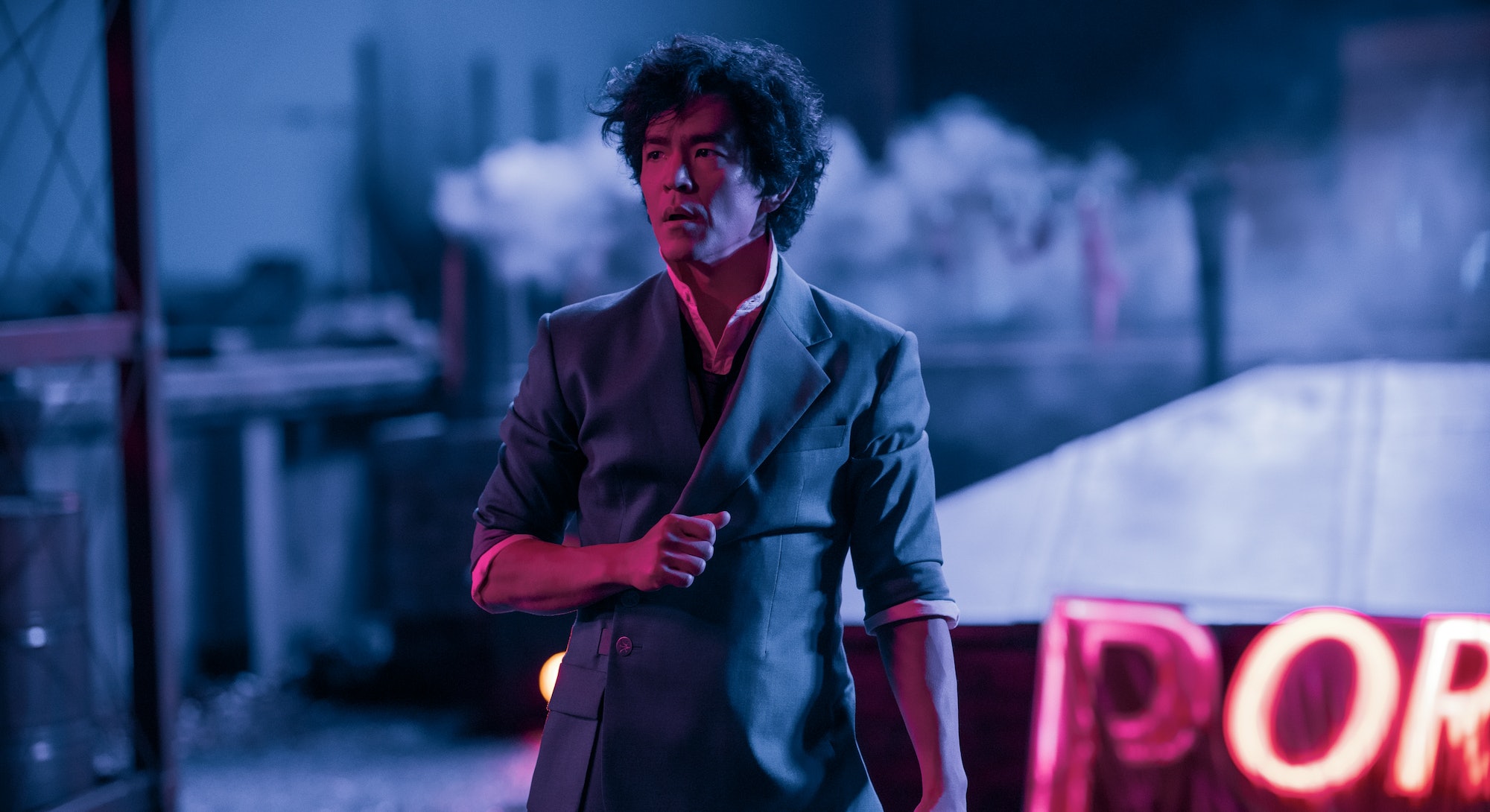 A drug deal gone wrong. A beautiful woman on the run with nowhere to go. An asteroid colony that looks and feels like Tijuana, Mexico.

Two sleek spaceships whose silhouettes resemble darts with wings rip through the skies, and then outer space, while a melancholy saxophone solo straight from a noir film sets the mood. It was in this moment, the climax to the first episode of the cult anime series Cowboy Bebop, that 49-year-old actor John Cho felt himself drawn by its gravitational pull.

“It was in contrast to this propulsive visual,” Cho raves to Inverse. “It was speaking to the heart of the scene and not what you were watching. I was like, This is unbelievable. I want to be there.”

Cho got his wish. On November 19, Netflix released its live-action adaptation of Shinichiro Watanabe’s beloved anime. The show stars Cho in the lead role of Spike Spiegel, a cool blue bounty hunter with a haunted past. Cowboy Bebop takes place in the future, where Earth is abandoned by humans who terraform the rest of the solar system, creating a new frontier for outlaws to run – and gun-for-hires called “cowboys” like Spike to catch them.

For Cho, starring in Cowboy Bebop is not quite a boyhood dream come true. When the anime began its original English-dubbed broadcast run on Adult Swim in 2001, he was just embarking on his career. His now multifaceted resume encompasses everything from the raunchy Harold & Kumar films and escapist Star Trek trilogy to dramas like Better Luck Tomorrow and Columbus. In 2014, Cho starred in the short-lived cult comedy Selfie, the first American TV series to star an Asian male as the romantic lead.

One could argue it was worth it for Cho to miss Cowboy Bebop on cable. “[The anime] completely missed me,” Cho says, revealing he only heard about it when the opportunity to play Spike was within reach. A phone call to filmmaker Aneesh Chaganty, who worked with Cho on the acclaimed 2018 thriller Searching, indicated to him the gravity of the project.

“When I said I got an offer to do Cowboy Bebop, there was a pregnant pause [from him]. And he said, ‘Okay, what role?’ I said, ‘Spike Spiegel.’ He said, ‘Holy shit, you have to fucking do it.’ That was my entry, and starting to understand how meaningful it was to people. When I watched it, it became meaningful to me.”

The show’s many iconic moments, like the aforementioned chase above a galactic Tijuana, grabbed Cho and refused to let go. “I was thrilled by its courageousness,” he says. “It was making bold choices. It was doing something serious, taking the ethos of jazz and applying it to mixing narrative structures in a fun way.”

With handsome looks and a charming aura reminiscent of silver screen idol James Shigeta, Cho has long stood on the precipice of stardom. Cowboy Bebop is bearing witness to both Cho’s potential as a leading man and proof of his abilities to be one all along.

That’s in spite of Cho defying Spike on paper. At 49, the Korean American actor maybe isn’t anyone’s first choice to play a protagonist drawn as a white man in his 20s. But he understands Spike Spiegel better than most people. And holistically, he might be the only one capable of the job.

On the secret to Spike’s casual cool-ness, Cho found a character who is aloof but observant – a passive actor in a never-ending play.

“He has this other life he’s hiding,” Cho says. “So this present moment in the present day, it’s like a play to him. He’s reciting lines. He’s not in the moment, he’s watching the moment. That’s why he comes off as cool.” He’s a far cry from Cho’s more buttoned-up hero of the Enterprise, Hikaru Sulu, in the Star Trek films.

“Sulu is in comparison, more earnest,” Cho says. “Sulu is a sort of ‘cannot tell a lie’ character, and Spike is always hiding and evading. They have very different relationships to the truth.”

No one can manufacture coolness. And as a real, living actor who must be present in his role, it was no doubt a tall order to effortfully look effortless.

“I didn’t think about being cool,” he says, “I thought about his character. ‘Cool’ is a byproduct of it. Key for me, unexpectedly, was just copying how he walked and stood, because it’s so unique. I didn’t know how to adapt an illustration into a person. So I just moved the way he moves and stand the way he stands. That was informative, as well as, of course, the [fight] training.”

It helped that Cho had to channel, however abstractly, the coolest person to ever live: the groundbreaking martial arts star, Bruce Lee. In both the anime and Netflix versions of Cowboy Bebop, Spike is proficient in Lee’s fighting style, Jeet Kune Do, designed to fluidly and efficiently react to an opponent’s unpredictable actions. As the template for modern mixed martial arts, Jeet Kune Do prepares practitioners for anything.

There’s a thematic purpose to the use of kung fu as well. “Cowboy Bebop seems to be about a tension between the future and the past,” Cho says. “That’s evident in the world: the future which feels like the past. It speaks to the characters' journeys struggling with memory. The inability to forget things or trying to remember things. It does feel appropriate for him to use outdated things and have mastery over technologically advanced things.”

Cho only studied Jeet Kune Do so much for Cowboy Bebop. But even in the show’s few fight scenes, one can see from Cho an understanding of Bruce Lee’s theories. He uses elbows and sweeping kicks to block attacks, whilst leveraging his opponents’ momentum to his advantage. All seamless, fluid in motion. Never aggressive or using more power than necessary.

If there’s a future for Cowboy Bebop, Cho wishes to dig deeper.

“If you want to think cool, you think Bruce [Lee].”

“If given a Season 2, I’d love to go further [in study],” Cho says. “We just got into the fights that have been choreographed. I kind of left that to Alan Poppleton, our stunt coordinator, to tutor us. I wish I could become a master of Jeet Kune Do, but I don’t think that was realistic. I was focused on realistic goals, which were to learn moves necessary to execute fights.”

Still, embodying the physicality of Spike connected Cho to Bruce Lee, an experience he notes was in its own way resonant.

“Bruce Lee’s shadow is so long, I couldn’t escape it even if I tried,” Cho says. “I’ve been thinking about Bruce Lee all my life, before I got into acting and certainly afterwards. I love watching his interviews. If you want to think cool, you think Bruce. It is a complete, almost serene self-confidence.”

Adds Cho, “The real task in Cowboy Bebop was to not to do a disservice and do some imitation of him, but try my own thing. But it's hard not to think about him all the time.”

Bruce Lee was one of the first Asian faces many people can remember gracing a Hollywood movie poster. In 2016, Cho found himself on many as well — without knowing about it. That year, Cho became the subject of #StarringJohnCho, a series of photoshopped movie posters featuring his likeness. The award-winning project was created by William Yu to advocate for more Asian representation in mainstream Hollywood.

Cho’s career allowed him to grace plenty of posters of his own, but he was paradoxically unable to breach through the industry’s upper echelons. Cho commented positively on the project in its immediate aftermath, expressing an understanding of its intentions.

But as the project turns five this year, Cho is grasping its full impact.

“Certainly the name John Cho was out there a little more,” observes Cho, “To me, the great triumph of #StarringJohnCho is [director] Jon Chu saw that campaign and directed Crazy Rich Asians. And Crazy Rich Asians had a big impact, [it] spawned careers. I can’t point to specific things in regards to me, but it started a very important conversation in a simple way.”

Finally, there is something starring John Cho, and it’s Cowboy Bebop. But will it lead to more things that, well, star John Cho? He has new movies lined up, including father-daughter drama Don’t Make Me Go and The Graduates, which tackles the difficult subject of school shootings.

After that? Whatever happens, happens. Cho will be ready.

“Spike, in times of great anxiety, becomes a computer. And I’m thinking, ‘Can I find a way to be calm in times of crisis?’” Cho says. “[Spike] seems to think in moments of crisis, to observe, and to make calculations. I wish I could do that. Maybe I am.”