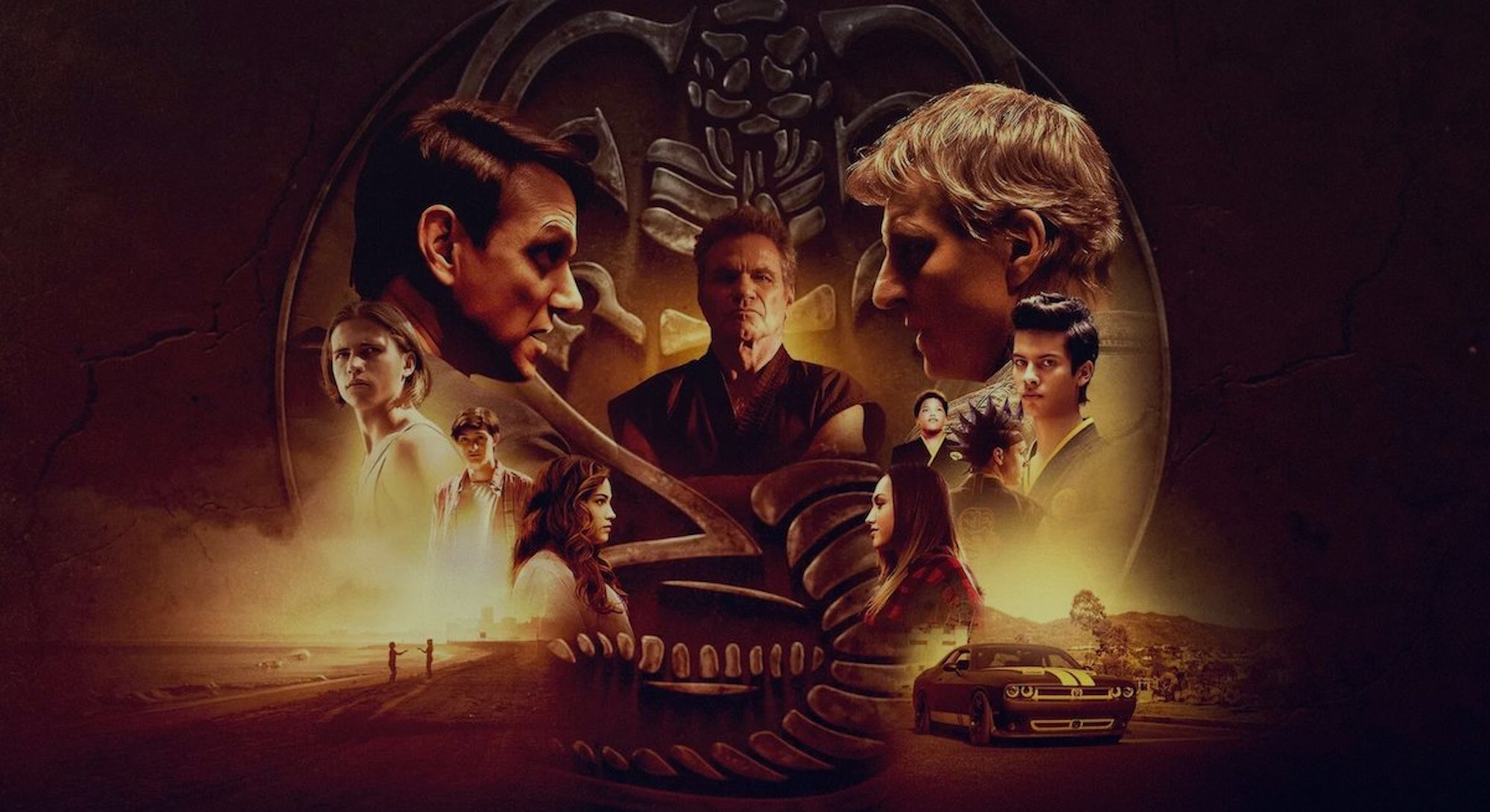 At the end of Cobra Kai Season 3, Johnny and Daniel finally put their differences aside to take down John Kreese.

But defeating Kreese and Cobra Kai won't be easy because, in the season's finale moments, the Karate Kid villain calls up an old friend — Terry Silver of The Karate Kid III. It looks like the events of the 1980s trilogy's final movie are going to become a focal point of Cobra Kai Season 4. The Karate Kid III is generally considered the worse in the series — and for good reason — but what can Cobra Kai’s next season learn from the weakest film in the franchise?

The Karate Kid III takes place about a year after the events of the first film. Daniel LaRusso receives a notice from the local karate tournament inviting him back to defend his title with a brand new rule that says Daniel only needs to fight the competition’s finalist. It should be an easy feat for Daniel — and kind of an unfair rule for his competitors.

LaRusso is raring to go, but Mr. Miyagi is against it. It's never clear why, but Miyagi's approach to karate has always emphasized personal growth over the actual fighting part. It’s a clumsily executed callback to the first film, but it's also far from this movie's biggest offense. And despite this flimsy argument, Daniel decides to decline out of respect for his master.

But it looks like Daniel soon won’t have a choice because John Kreese is back and still holding a massive grudge. He’s also in bad shape: he lost all his karate students and he’s in serious financial trouble. This certainly makes sense since the former Cobra Kai students seemed pretty disillusioned with their sensei, but why isn't Kreese in jail for trying to straight-up murder Johnny Lawrence.

Kreese calls up his old Vietnam War buddy, the ridiculously wealthy and wonderfully bonkers Terry Silver. Terry puts everything on hold (“for the next few weeks, my business is strictly revenge”) and dedicates himself to getting Kreese’s revenge on Daniel and Miyagi. That’s one of the benefits of being friends with rich weirdos.

Terry Silver (Thomas Ian Griffith) is the best part of Karate Kid III. Thomas Ian Griffith just goes all-out with this role, and it is delightful to watch. I thought Sato and Chozen were cartoon villains, but this guy dials up the evil by 100 — all you can do is laugh at this point. Griffith is clearly having a blast with this role — his Terry Silver knows when to be subtle and when to be over-the-top.

The man is a master manipulator. In front of regular people, he’s personable and charming. As soon as he’s alone, he’s a pure evil, psychotic villain complete with a cackling villain laugh.

Terry’s evil plan is to drive a rift between Daniel and Mr. Miyagi and then have Daniel get a royal beatdown from deranged “Karate Bad Boy,” Mike Barnes. Oh, and he wants to set up a bunch of Cobra Kai dojos around the country — oh, and dump toxic waste. (It was the late '80s. Weak environmental messages were popular at this time).

But Daniel doesn’t want to enter the tournament. So Terry sends Mike and his friends to harass Daniel into competing. These guys make the Cobra Kai bullies from the first movie look like cub scouts.

Mike and his lackeys steal from Mr. Miyagi’s store, destroy his property, threaten to rape Daniel’s friend Jessica, and then almost murder Daniel and Jessica while rock climbing. Under duress, Daniel signs up for the tournament.

This was a stupid plan on Mike Barnes’s part. If he kills Daniel, Daniel can’t compete, and Mike goes to prison. If Mike kills Jessica, then he’ll still get prison time and still can’t compete. He’s lucky that Daniel doesn’t have the time or foresight to consider this.

Here’s where Mr. Miyagi’s character takes a beating. In the first film, Mr. Miyagi supports Daniel competing when he realizes Cobra Kai won’t leave him alone. In Karate Kid II, he lets Daniel fight Chozen because Kumiko’s life was threatened. Here? Mr. Miyagi refuses to train Daniel for the tournament even though Mike Barnes tried to kill Daniel and Jessica.

It’s basically the same situation as the first movie. This seems like the wrong time for Mr. Miyagi to double-down on his karate-practice restrictions. It's also what drives the hot-headed Daniel to train with Terry Silver at Cobra Kai.

It’s a very contrived way to cause conflict between Daniel and Mr. Miyagi. It doesn’t even take long for Daniel to quit Cobra Kai and for Mr. Miyagi to resume training him. Of course, Daniel beats Mike Barnes with a highly anti-climactic flip — this is no crane kick.

That's how The Karate Kid saga ends — at least until Miyagi moves to Boston and starts training Hilary Swank in the '90s. It's undeniably the worst movie in the original trilogy, but with Cobra Kai set to borrow heavily from the movie, is there anything the Netflix show can borrow from the story of Terry Silver?

This is the biggest problem with Cobra Kai. It never feels like Johnny and Daniel evolved as human beings between the movies and the show. Instead, they're middle-aged men still hung up on petty high school drama.

Remember at the end of the first film when Johnny presented the trophy to Daniel and said, “You’re alright, LaRusso”? It was only 10 seconds, but it was real character development. At that moment, Johnny realized Kreese was a manipulative bastard and Daniel deserved to win. He was disappointed but not angry that he lost. He learned something.

But at the start of Cobra Kai, Johnny is a bitter, resentful loser and Daniel is a cocky asshole. The two have a lot in common and could’ve been real friends much earlier. Every time they made steps towards growing and maturing, they would take two steps back — within the same episode.

It was beyond frustrating to see two characters make some progress, only to regress a few minutes later for three straight seasons. As of the end of Season 3, Johnny and Daniel are finally on the same page and have merged their dojos against Kreese’s Cobra Kai. Hopefully in Season 4, the writers won't make the mistake of creating more conflict between these two. They just became allies — start from there.

2. Let The Bad Guy Do His Thing

The only reference Cobra Kai has made so far to Karate Kid III was Daniel admitting to his daughter that he had once joined Cobra Kai. But that’s about to change in Season 4 with the return of Terry. This guy is a great villain. Let him be as deliciously, psychotically evil, and manipulative as he was in the movie.

Terry was the best part of Karate Kid III. He could easily be the most entertaining character in Cobra Kai Season 4 too. I just hope the show can come up with something more creative than Terry driving a wedge between Daniel and Johnny (just like he did with Daniel and Miyagi). Instead, the franchise's best villain needs to do something new that still feels in keeping with his character.

1. Keep Some Characters In The Past

Cobra Kai has a habit of unnecessarily dragging out every character that ever appeared in the movies. Season 3 featured two of Daniel’s ex-girlfriends, but there's one character Season 4 could (but probably shouldn't) reintroduce: Jessica.

There's nothing wrong with Robyn Lively’s performance. She's just the designated “girl” character who doesn't have much to do. Jessica wasn’t even Daniel’s girlfriend, they were just friends (the result of a script rewrite due to the awkwardness of Macchio and Lively’s eleven-year age difference), and she was shipped back to Ohio before the movie even ended. Bringing back Jessica would be a waste of time and serve no purpose besides pure nostalgia.