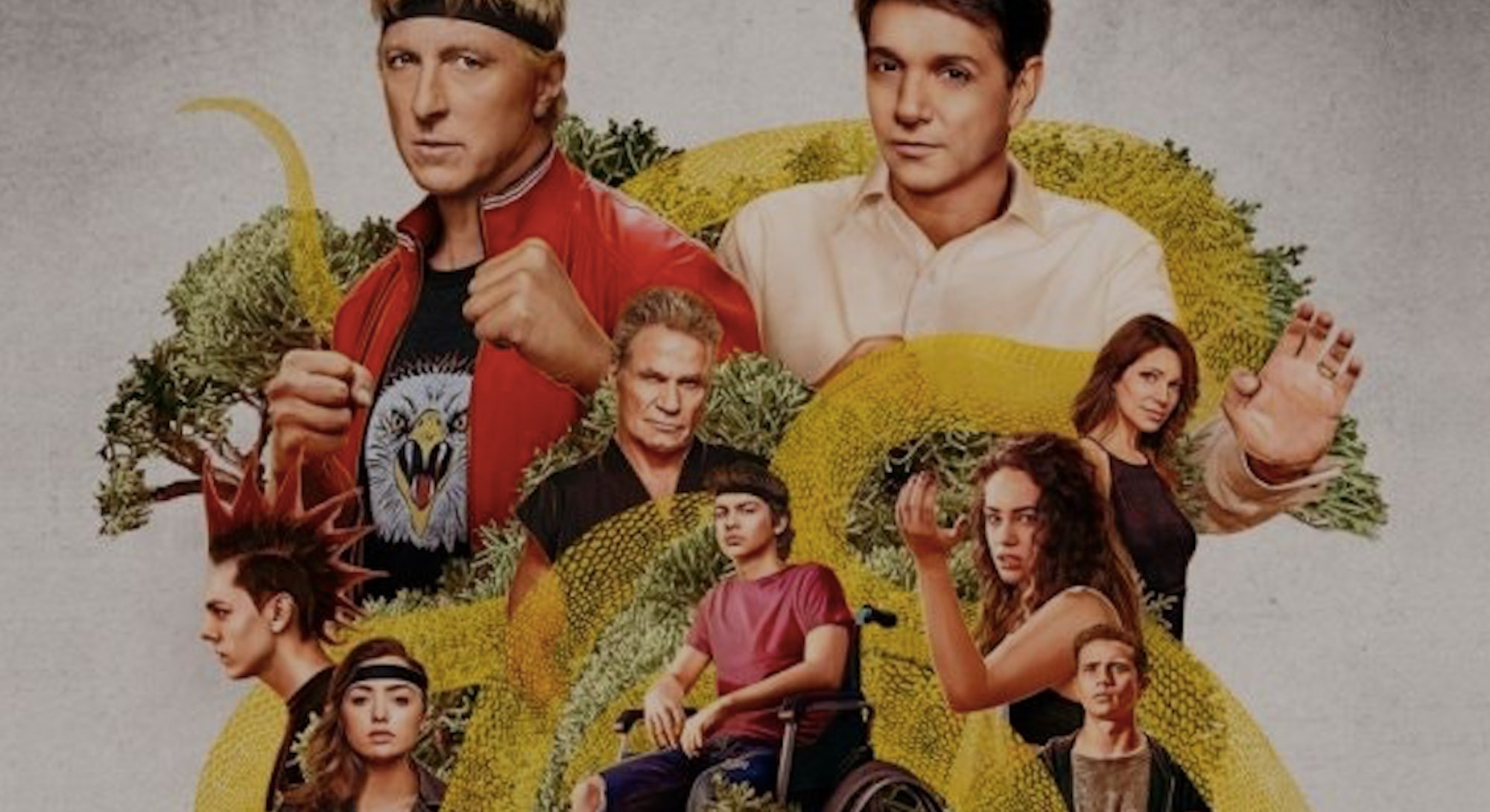 Proving once again that nothing beats the power of nostalgia, Cobra Kai Season 3 premiered on Netflix in January and quickly climbed to the top of the streaming service's trending list.

After Season 2 left the plot on a major cliffhanger with the evil sensei John Kreese retaking control of Cobra Kai dojo, Season 3 upped the ante by... traveling to Japan?

The truth is, the latest season of Cobra Kai makes a lot more sense if you've watched the source material: in this case, The Karate Kid 2. But, unfortunately, the Netflix series takes what was always a totally okay 1980s sequel with fun-but-forgettable characters and ruins it for the sake of our white hero's soul-searching walkabout.

Karate Kid II picks up just minutes after the first movie’s ending when Daniel wins the All Valley karate tournament. Skip to a few months later and Mr. Miyagi gets a letter from his hometown in Okinawa. His elderly father is dying, so Miyagi and Daniel head to Japan. On the way there, Miyagi expands on his already tragic backstory with even more depressing details about his past.

Turns out, Miyagi was forced to leave his village because he was in love with the girl betrothed to his rich best friend. That friend, Sato, was also trained in karate by Miyagi’s dying father. Sato and his family got pissed off when Miyagi announced his wish to marry the fiancee. Things got really awkward, and Miyagi had to skip town.

At this point, it feels like Karate Kid II is just piling on the misery. Miyagi’s backstory in the first movie was already tragic enough. His beloved wife died in childbirth with their infant son in a Japanese internment camp while Miyagi was overseas fighting in World War II. Message to screenwriters: more tragedy doesn't automatically mean a better story.

Miyagi and Daniel arrive in the village and reunite with Miyagi’s love, Yukie. She never married Sato or anyone else. Naturally, Miyagi instantly falls back in love with her.

Sure, people can have multiple romances in a lifetime, but there is literally no mention of Miyagi’s deceased wife in this movie. Remember in the first movie, when Miyagi held an anniversary ceremony for his wife? Then got wasted? It was both moving and funny. Now, it’s like his wife never existed.

Meanwhile, Daniel has a romance with Yukie’s teenage niece, Kumiko. The love story is certainly...there. That’s really all you can say, and it’s a real waste of the gifted Tamlyn Tomita.

Miyagi sees his father before he passes away, but his old frenemy, Sato, is still around and carrying a massive grudge.

Sato also has his own lawless karate army in the form of his nephew, Chozen — whom Sato has trained in violent, murderous karate. With weapons.

Sato wants to fight Miyagi to the death to avenge his honor, and his psychotic nephew wants to kill Daniel for shits and giggles. They’re both the expected obnoxiously over-the-top ‘80s film villains you'd expect.

The pacifist Miyagi naturally wants to avoid a fight, but when Chozen turns up the murder dial, Miyagi decides it’s time to get the hell out of town. Yukie begs Miyagi to take her with him. He never answers her — because Mr. Miyagi is a wild steed that can't be tamed!

But Sato has another card to play. The village will be bulldozed to the ground if Miyagi refuses to fight him. Dude, how is this a good plan? Don’t you and your nephew still live here, too? This seems very poorly thought out.

Miyagi agrees to fight Sato, but a convenient typhoon rolls in, leading Miyagi to save Sato’s life and Daniel rescuing a little girl. Sato becomes a good guy, tells Miyagi they’re cool now, and the village throws a big celebration. Unfortunately, Chozen is still a psycho and threatens Kumiko to get Daniel to fight him.

Daniel, of course, defeats Chozen but spares his life, which is where the movie ends.

Karate Kid II isn’t the worst movie sequel I’ve ever seen, but it’s far from the best. Instead of expanding on the characters, it just piles the pathos on Miyagi. The villains are cartoonishly evil, shallow, and poorly motivated. The side characters are bland and underdeveloped.

This brings us to The Karate Kid Netflix series, Cobra Kai.

How Cobra Kai Season 3 changes everything

We were told this season would loop in Karate Kid II, and it would be super important. But was it really?

An adult Daniel LaRusso goes to Japan to secure a business deal with a car manufacturer to save his dying car dealership. He's been having an image problem in his town since there’s an ongoing war between his karate dojo and Cobra Kai — yes, you read that right — and now, no one will do business with him.

The car manufacturer turns him down, so to relieve his depression, Daniel decides to head to Okinawa and visit Mr. Miyagi’s village — which is a mall now. And honestly, it’s pretty depressing.

Who does Daniel run into but his old girlfriend, Kumiko! Y’know, the girl he dated for a week when he was 18?

Kumiko tells Daniel that she became a professional dancer and traveled the world, but started teaching dance locally when she had to take care of her dying Aunt Yukie (who never went to America with Miyagi). Kumiko never married — she got offers, but “none of them fought to the death for her.”

(Okay, I’m all for women being independent and not feeling pressured to marry, but I loathe the implication that a woman couldn’t move on from a week-long teen romance. I also find it a little gross that Kumiko and Yukie stayed hung up on their first loves while Miyagi and Daniel moved on and married other people — I feel my depression intensifying.)

Chozen tells Daniel that he tried to kill himself after their fight, but his Uncle Sato “saved him.” I really hope “saving him” means intensive therapy and a ton of medication. Like Kumiko, Chozen is also alone with no family and a local job teaching karate. Keep the good feelings coming, Cobra Kai!

Chozen and Daniel make up after they fight for Miyagi family artifacts. And Chozen teaches Daniel a new move that paralyzes his opponent. They’re friends now.

Before Daniel leaves, Kumiko reintroduces him to Yuna, the little girl he saved from the typhoon thirty years ago. She just happens to be Senior Vice President of Sales at the car manufacturer who rejected Daniel. Yuna’s going to give him the deal and save his company.

Frankly, these Okinawa episodes are very pandering. It’s clear the writers were desperate for an excuse to get these mediocre sequel characters on screen, and Daniel’s business woes were the convenient plotline to accomplish it.

These two episodes were “important” because Chozen teaches Daniel that karate move — a move that Daniel used to defeat John Kreese in the Cobra Kai Season 3 finale. But was it necessary? Daniel didn’t need to go to Japan to learn this move. Creative storytelling could have found other avenues.

Both Tamlyn Tomita and Yuji Okumoto are accomplished actors. They certainly didn’t need this gig. And it seems like a waste to bring them on for what is essentially a glorified cameo.

We don’t learn anything fundamentally new about their characters either. Anyone who’s seen Karate Kid III knows Kumiko became a dancer, and it’s reiterated on the show. Chozen is an obvious allegory for “people deserve a second chance,” but we don’t know anything about how this change came about. He was a cipher in the movie, and he’s a cipher on Cobra Kai.

Cobra Kai is pure nostalgia, and that's okay. But it’s annoying when the show feels it can’t move on from the old days. This usually happens when a series starts dragging out every minor character that’s ever appeared in the franchise to give them a whole story — regardless of whether the audience even remembers or cares about those characters in the first place.

I binged the entire Cobra Kai series in three days. It’s ‘80s nostalgia, but it’s become toxic nostalgia. Most of the original characters don’t seem to have grown or learned anything. If there’s even a hint of a step forward in character growth, it’s usually two steps back a few minutes later. Karate Kid II was a mediocre movie, but Cobra Kai has made it feel downright depressing.