No Mercy, No Fear

“I will not be the last Jedi.” 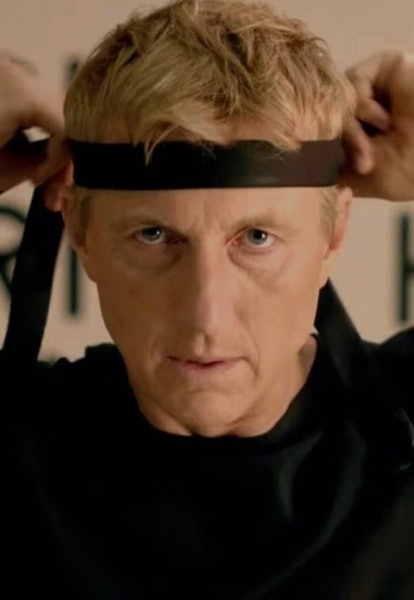 Sure, nostalgia is a powerful tool, but the careful balancing act of bringing back beloved characters while adding new faces to a franchise can easily go wrong.

One useful trick? Try jumping decades into the future to see how the main characters of a classic story turned out before setting them up as mentors for the next generation. In the past few years, two popular movies got this same treatment. One is an attempt to rekindle a franchise from the ‘80s by having its beloved protagonists come back as mentors to a new generation of misfits heroes undergoing similar struggles. The other one uses the term “karate sensei” instead of “Jedi master.”

I’m talking, of course, about Star Wars and Cobra Kai, the popular sequel spun out of The Karate Kid that released its third season on Netflix in January 2021. These two stories about galactic civil war and spin-kicking teenagers might seem to have nothing in common, but once you start looking into it, it becomes eerie how these two reboots are alike.

At their core, the films they stemmed from were both typical hero’s journeys centered around how the spiritual teachings of a martial art can turn a misfit into a hero. However, the biggest similarity these two pieces of media have in common is their fascination for a particular type of human: the guy (or girl) who peaked in high school.

Picking up three decades after the events of The Karate Kid (1984), The Karate Kid Part II (1986) and The Karate Kid Part III (1989), our protagonist is now Johnny Lawrence (William Zabka), the blonde bully in the original film. Johnny is haunted by the violence and abuse he grew up on and finds himself at a low point in life. Why? Not because he got fired from his job for being incompetent and arrogant, but because decades ago he lost a karate tournament and his girlfriend to a scrawny little kid who is now more successful than him. The obvious solution? Put all his efforts into reviving Cobra Kai with a new spirit and teach the kids of today how not to be pussies.

Meanwhile, on the other side of town, Daniel LaRusso (Ralph Macchio) has spent the last 30 years living the life you would expect from a dude whose main personality trait is being the two-time champion of the All Valley Karate Tournament. He owns a car dealership, which, albeit successful, seems to run on karate puns and free bonsai trees.

Mr. Miyagi (originally played by the late Noriyuki Morita, who passed in 2005), comes back in Cobra Kai as a legacy Daniel is almost obsessively trying to live up to. But everyone in the Valley seems to be obsessed with karate and so Daniel opens up his own dojo, Miyagi-Do to pass on the teachings of his own master onto a new generation. It’s honestly quite sad to see Daniel so engrossed in the legacy of Miyagi when you consider than in the Karate Kid canon, Mr. Miyagi had already moved on from mentoring Daniel as soon as the ‘80s wrapped up, training up a girl named Julie on the other side of the country in The Next Karate Kid (1994).

You might pity these characters in a way that you don’t think you feel about the Star Wars trio, but that’s only because all the stars in their galaxy blinded your vision. When we saw the return of Han, Leia, and Luke in The Force Awakens they weren’t in much better shape than our karate duo. They simultaneously seemed to be light-years from the heroes they had become by saving the galaxy in their 20’s but also still stuck in that exact same moment in time.

Leia and Han are still in the same beauty and the beast relationship: she, the ever so splendid rebellion leader, he, the scruffy smuggler. The scale of their crowning life achievement of saving lives on a multitude of planets and bringing peace across the galaxy sets them just slightly ahead of the local karate tourney champs. Johnny Lawrence’s son Robby hates him almost as much as Kylo Ren hates Han Solo.

But in Cobra Kai Season 3, Johnny and Daniel find themselves following in the footsteps of Luke Skywalker in The Last Jedi. After giving the teaching thing a try, they each fail their star pupil and retire.

When the entire dispute leads to a high school brawl in the Season 2 finale that ends with Miguel in a coma and Robby on the run from the law, both dads leave their dojos and go into hiding. But this only opens up a window for an evil villain from a previous installment, Johnny’s own sensei Kreese, to taint the minds of these youths and bring them over to the dark side.

If you still can’t see it let me spell it out for you: the same exact thing happened after Ben Solo burnt down the Jedi academy. Luke went into hiding out of shame for the failure he had become for allowing one of his students to go bad (like Daniel) and the rest of his pupils to get hurt (like Johnny). But his decision to bail on Ben only made him more vulnerable to be groomed by the Dark Side and eventually turn into Kylo Ren (which is what happens in Season 3 after Kreese takes over Cobra Kai).

In Cobra Kai Season 4, both Luke and our karate dads duo will have to work their way up from the bottom again once a promising and struggling young student crosses their path (again). And it’s only by reconnecting with the teachings of their old masters (or in Daniel’s case in this season, flying all the way to Japan to get beaten up by an old rival) that they’ll find the true meaning of the Force, ahem, karate.