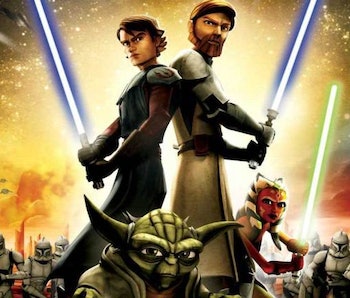 Good guys sneaking past a bad-guy checkpoint is a classic Star Wars scenario. Arguably, this originates in Return of the Jedi — that nail-biting moment when Han, Luke, Leia, and Chewie have to slip by an Imperial shield in a stolen shuttle. More recently, The Rise of Skywalker introduced an even easier way to slip onto enemy ships was introduced by Zorii Bliss.

So when was this tech invented? In the latest episode of The Clone Wars, — "Unfinished Business" — it seems like an earlier version of Zorii's medallion was accidentally invented by Clone Trooper Echo. Spoilers ahead.

"Unfinished Business" opens with Anakin, Captain Rex, and the Bad Batch sneaking onto a Separatist Dreadnaught. Unlike Han flying a stolen shuttle in ROTJ, this Republic Strike Force is just flying one of their own ships. When Battle Droids first notice the shuttle trying to land, they comment that the ship "doesn't look like one of ours."

This is when Echo steps in. After being rescued from the Techno Union Army in the previous episode, Echo has the ability to jack into all sorts of computer terminals, kind of like a human R2-D2. He's essentially a super-hacker, complete with the ability to make the Republic shuttle look like a Sepertatis transport. After the graphic on the Battle Droid's scanner changes, the droids decide everything is cool.

If they looked out the window, they'd know a totally different ship was about to land, but, if The Clone Wars is determined to do one thing, it's convince us how ineffective it is to fight a space war with dumb robots.

Star Wars is low-key obsessed with telling us that various automated tasks are easy to way for things to go wrong or for someone to take advantage of you. The good guys in Star Wars are usually touch with their feelings and analog ways of doing things, so this usually works out for them. After all, Luke won the day in A New Hope was by turning off his targeting computer and using the Force. Automation often leads to incompetence in a galaxy, far, far away, and the checkpoint phenomenon is a prime example.

Although Rise of Skywalker takes place nearly four decades after The Clone Wars, Echo's hack is pretty damn close to Zorii Bliss' Captain's Medallion, which grants anyone holding it the ability to land their ship anywhere. Zorii refers to this as "landing privileges" by using an encrypted subspace code. Until now, we had no idea how this would work in practice.

Using what looks like some kind of code-breaking tech, Echo changed the encryption of what the Battle Droids are seeing. Considering that the Republic becomes the Empire, and then, eventually, the First Order, it seems possible that the basics for how the Captain's Medallion functioned were developed right here. So, does Zorii have Echo to thank for her Medallion? Maybe. But only from a certain point of view.