“sci-fi has always been a big part of my life.” 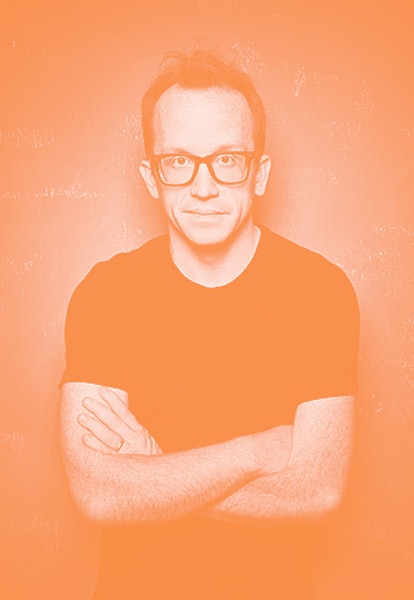 For a guy who calls himself “shockingly introverted,” Chris Gethard really likes talking on the phone.

If you’re not a fan of The Chris Gethard Show, his HBO stand-up special Career Suicide, or his podcast Beautiful Anonymous, you still might recognize Chris Gethard as “Dwight’s friend from The Office,” or, more recently, the weird squinty guy from Space Force. But if you only know him from sit-com appearances, you’re missing the wildly unpredictable nature of Gethard’s best work that takes him to places most performers are unwilling to go.

The 40-year-old comedian has mined his lifelong struggle with mental health for a successful career in comedy and talking to complete strangers on the phone is a tool to deal with his anxieties. But despite his ease in listening and discussing random callers while being recorded, Gethard is surprisingly awkward around fans when the cameras aren’t rolling.

“I promise you, this confuses me more than anyone else,” he tells Inverse.

From walking across the country and sleeping on fans couches, to speaking openly about depression and suicide, to running a podcast call in show where one anonymous caller gets to speak with him for an hour about the subject of their choosing, there seems to be no limit to the places Chris Gethard will go to get a laugh and explore the human connection between himself and his audience.

So despite his manager’s suggestion to stop talking to people on the phone, Chris leaned into it, starting a podcast where that was the entire concept and returning to the format for television with his new show Chris Gethard Presents — now on public access after the Chris Gethard Show was cancelled on truTV. He even calls himself a “telephone call enthusiast” on his website.

In an interview (over the phone, of course), Chris talks about mental health, eating too much MDMA, and how he ended up next to a rocket ship with John Malkovich on Space Force.

How does someone with severe childhood anxiety go into comedy?

I had a lot of anxiety from getting bullied in school and getting on stage and making people laugh made me feel empowered. But unfortunately, I started getting addicted to the adrenaline rush of being on stage, and it became a way to put off getting mental help. It was a big revelation when I realized it wasn’t a replacement for getting my mental state in order.

Is that what led you to start taking calls from random callers on the Chris Gethard Show?

I was a lead on a sitcom that didn’t make it and I was pissed off from people blaming me.

Many viewers identified with my frustration and those phone lines helped build a community which was something we never anticipated.

When we switched to Fusion, the show had to move faster, and the phone calls became more functional rather than conversational, like calling up and guessing the secret word or some other bit. I missed those meandering phone calls, and some of my favorite public access episodes are ones where we focused on the call and just dropped the bit we had planned. That’s just not possible on commercial TV and became a driving factor for starting Beautiful Anonymous.

In Career Suicide, you talked about getting depression attacks. Does that go away when you take calls?

I’m often at my best conversationally, on the phone with a stranger, which can be very frustrating for fans. I understand this is psychologically difficult to understand. I enjoy going on a stage, having lights pointed at me, talking into a microphone, and moments later can be shockingly introverted. I promise you, it confuses me more than anyone else.

How do you feel about the role of magic mushrooms or other kinds of drugs for self-medication?

I’ve never done mushrooms or acid because I’ve always felt that someone with my mental state shouldn't mess with hallucinogens. However, and I’ve spoken about this publicly, I have taken medications under a doctor's care. I also went way too hard at MDMA and tried to eat as much as I could find and recognized immediately that I’m an addict and this is why I shouldn’t mess with the stuff. But until I went too crazy with it, the experience was wonderful, and I understand why there are clinical trials for it. When people ask me for advice on mental health, I tell them that therapy and medication worked for me, but at the end of the day if you can find something that helps you grapple with the reality of the world then I'm all for it. When I talked about this in Career Suicide, it felt shocking, but the conversation around self-medication has opened up since then, and I don’t think it would be as shocking today, and that’s a good thing.

You said that a moment in one of the most recent episodes of Beautiful Anonymous might have been the craziest moment in the show ever.

That episode was probably the most scared I've ever been on the phone. The caller was talking about how her husband had been cheating on her, and all of a sudden he came home in the middle of the call. You could hear the fear rise up in her voice when she heard him talking to her. That moment was not okay, and I wanted her to recognize that she had the power to react however she wanted to her husband cheating on her.

We get a lot of calls about mental health and a few times we’ve stopped the call when the person is clearly agitated or manic on the phone and we recommended they talk to a professional about what they’re going through. I can't put something like that out there and in good faith claim that it's entertainment on any level.

On a lighter note, I enjoyed your role in Space Force. Are you a big sci-fi fan?

I was a Star Wars fanatic growing up, and in high school, I had legitimately memorized the entire Star Wars encyclopedia. People thought I was nuts, but it was a great party trick to open any page of the book and tell you what was in it. So yeah, sci-fi has always been a big part of my life and it meant a lot to be on that show. I got the job with one-days notice, so I flew to LA overnight, slept two-and-a-half hours in a hotel, got thrown into a van and driven to a canyon with a full-sized rocket ship and John Malkovich sitting there in a lawn chair and I’m wondering what I stumbled into.

How much of your old improvisational skills went into that role?

Greg Daniels (series creator) asked for me personally, which is a huge honor, and because I didn't have time to prepare, it became ‘let’s just start bouncing stuff off each other’. I’m used to playing these nerd characters in Broad City and The Office, but for this role, they wanted to make it seem like I had just wandered out of the woods from the movie Deliverance. They were pushing me in directions I don’t usually get to go in, and in that situation, on a few hours’ sleep, the improv skills have to come into play.

You bought a house in New Jersey and you seem like you’re in a good place, but are there times you regret not moving out to L.A.?

It's probably not the smartest thing to avoid the city where all the acting jobs are.

I had a friend once tell me ‘if you don't move out to L.A. you're not taking your career seriously.’ That irked me, but I realized I work 10 times harder on my career than anyone I know, and I've done it my own way with my tv show and podcast, so you can't tell me I'm not taking my career seriously. I might be dumb, but I have a lot of integrity, and maybe those things will balance out.