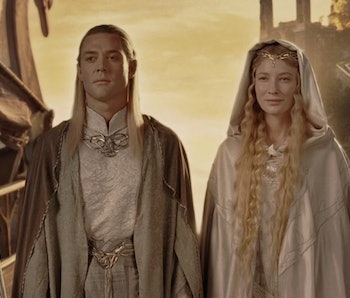 Galadriel surprises us with each new episode of The Rings of Power. J.R.R. Tolkien characterized Galadriel as one of the most beautiful, knowledgeable, and mighty Elves in Middle-earth. She’s a woman who can be as thunderous as she is heavenly. She’s also married to Celeborn — or at least, she was in the Lord of the Rings books and Peter Jackson’s movies.

Whenever Galadriel stepped into frame in The Lord of the Rings and The Hobbit film trilogies, you felt a sense of cold detachment emanating from her. She was almost too otherworldly to relate to mere mortals.

But that was who Galadriel became as she aged. In the Second Age, a thousand years before Frodo Baggins is given the One Ring by his uncle Bilbo, Galadriel is an Elven warrior princess who might have too many emotions stirring in her soul to keep her away from defeating the evils wrought by Morgoth and Sauron. Or to keep herself from falling for Charlie Vickers’ dashing and enigmatic Halbrand, a supposed king of Men in the Southlands.

Spoilers for Episode 7 of The Rings of Power ahead!

In Episode 7 of The Rings of Power, we discover that Galadriel was once a blushing bride. She was first spotted frolicking in a field by her future husband, Celeborn, but after they married he perished along with her brother while battling dark creatures that ooze black blood. Or at least that’s what Galadriel thinks.

Fans of Peter Jackson’s movies know that Celeborn is alive and well. In fact, Celeborn is part of Galadriel’s happily-ever-after in the Undying Lands at the end of The Return of the King.

The Rings of Power is showing us what happened with Celeborn between the First and Third Ages, which Tolkien only alluded to. While the Amazon show is clearly taking creative liberties — and deftly jumping through the hoops of Tolkien licensing issues — with Celeborn’s origins and romance of Galadriel, we know some of Celeborn’s history from Tolkien’s writings, and that history could make it into The Rings of Power.

Who is Celeborn in Lord of the Rings?

Celeborn is the Lord of Lothlórien, earning his title by wooing and eventually wedding Galadriel in the First Age. In the pre-Morgoth years, their only issues were with the Dwarves, who stole the Silmarils. Disputes about the three treasured gems led to the Second Age distrust we see in The Rings of Power between Elves and the Dwarves.

The First Age ends with the defeat of Morgoth. Afterward, according to Tolkien’s writings, Galadriel remains in Middle-earth with Celeborn. (The Rings of Power is tweaking canon by making Celeborn missing in action.)

Post-Morgoth, Galadriel and Celeborn have a daughter together, Celebrían, eventual wife to Elrond and mother to Liv Tyler’s Arwen. Soon afterward, they dwell in Eregion among Celebrimbor and the Elven-smiths, with the Dwarves of Khazad-dûm busy mining mithril nearby. Celeborn, according to Tolkien, distrusted the Dwarves and kept his distance, although he would later have a change of heart.

Centuries passed, and a mysterious man named Annatar asked Celeborn and the Elven-smiths to forge the Rings of Power under his instruction as gifts to the leaders of Middle-earth. Annatar, however, was Sauron in disguise. Celeborn, Elrond, and a legion of warrior Elves fight Sauron and defend Eregion, but they were unsuccessful and Celebrimbor is brutally murdered by the dark lord’s forces.

At the end of the Second Age, the Last Alliance of men and elves nearly destroys Sauron and sends him into hiding toward the east in Dol Guldur. Meanwhile, Celeborn and Galadriel live in peace in Lothlórien. They dwell there for centuries until Galadriel and Celeborn meet the Fellowship of the Ring sent to destroy the One Ring. After Sauron is defeated, Galadirle returns to the dying lands and is later joined by her husband.

The Inverse Analysis — While we haven’t met “young” Celeborn quite yet, he’ll likely make an appearance, either toward the end of Season 1 as a surprise reveal, or in Season 2.

For continuity’s sake, The Rings of Power has to bring Celeborn into the fold, as he’s a pivotal character in the lives of Galadriel, Elrond, Celebrimbor, and the Dwarves. It wouldn’t make sense to keep him dead or missing. The romantic tension between Galadriel and Halbrand has been juicy to watch unfold, but it’s time for Galadriel to reunite with her husband.