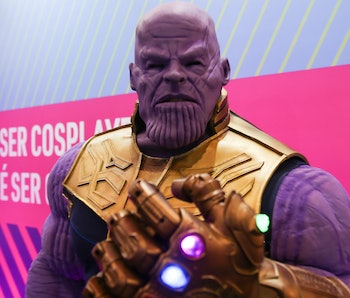 In a year without a real Comic-Con, it's slim pickings for major studios like Marvel to make news. Could the Brazilian fan convention CCXP Worlds — going virtual in a year of Covid-19 — be the place Marvel reveals something new?

While this is purely speculative, here's why Marvel fans should keep a close eye on their social media feeds this weekend.

What Happened? — Earlier this week, CCXP, a major entertainment and genre convention held in Brazil every year since 2014, finalized the schedule for its (virtual) convention taking place today, December 4, and through the weekend until December 6.

The fan blog Murphy's Multiverse published a helpful graphic that mapped out the convention by studio. The biggest players "attending" CCXP include AMC, Funimation, Paramount, Amazon Prime, Sony, Universal, and WarnerMedia. Movies confirmed to reveal new stuff include Monster Hunter and the horror movie Freaky. WarnerMedia will also present a handful of DC media, although which media (The Batman? Black Adam? The Flash?) are unknown. Inverse has also heard from sources that the 2021 movie Snake Eyes will have a panel.

But the most compelling panel is a "LOCKED PANEL" taking place on Saturday, December 5, at 5:30 p.m. Eastern. Could this locked panel be something from Marvel?

Marvel Studios has had a presence at CCXP in its short history. Movies from the Marvel Cinematic Universe that have been present at CCXP have included Captain Marvel and Spider-Man: Far From Home. In 2019, Marvel Studios figurehead Kevin Feige was present at CCXP, where he premiered footage of the movie Eternals to a packed crowd. That footage hasn't yet leaked online, and the world outside CCXP still hasn't seen anything of Eternals even now. The movie was originally slated to be released on November 6, until the Covid-19 pandemic delayed it to 2021.

Is Marvel keeping its attendance a surprise? Marvel has had a presence at CCXP, and a major one at that. But the studio hasn't announced its attendance for CCXP 2020. Just this week, set footage of the Disney+ series Hawkeye made its way online, which confirmed the casting of Hailee Steinfeld as Hawkeye's protege Kate Bishop. Will Disney finally announce what's to come in Hawkeye? Will we finally get an Eternals trailer? Who knows what surprises Feige might have in store...

And there's still more question marks about the MCU that Disney/Marvel could announce at CCXP. There's the matter of The Falcon and the Winter Soldier, which was pushed into 2021 after it couldn't make its previously expected fall 2020 premere date on Disney+. There's possibility for Shang-Chi and the Legend of the Ten Rings, which wrapped production in Australia this year. Or, there could be a more in-depth look at WandaVision, which finally confirmed its Disney+ premiere for January 2021. There's Ms. Marvel, filming now in Atlanta. And there's been rampant casting rumors for Moon Knight and She-Hulk and some real shockers (get it?) for Spider-Man 3, all of which can be cleared up should Marvel show up at CCXP.

Inverse has reached out to Disney for comment and the company has not yet responded with an answer. We'll update if we know more before the 5:30 p.m. Eastern reveal on Saturday, December 5.