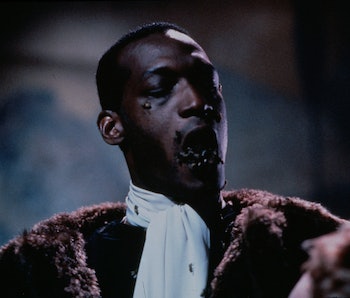 Say his name five more times. In summer 2021, Tony Todd will return to the role of his mirror boogeyman, Candyman, in the long-awaited sequel to the 1992 horror movie about a ghost that haunts Chicago's housing projects. Acclaimed director Jordan Peele (Get Out, Us) produces and co-writes with Win Roselfeld in a project directed by Nia DaCosta. Here's everything we know so far about the movie.

When is the release date for Candyman?

The film will release in theaters on August 27, 2021. Originally, the movie was set for June 12, 2020 by Universal Pictures. However, the release was delayed three times due to the COVID-19 pandemic shuttering movie theaters worldwide.

Candyman is an upcoming sequel to the 1992 movie of the same name from freshman director Nia DaCosta. Peele is involved in the movie as co-screenwriter and producer.

The original Candyman, directed by Bernard Rose, tells the story of a grad student (Virginia Madsen) who discovers the myth of the Candyman (Tony Todd), a ghostly killer who can be summoned when you say his name five times into a mirror. It just so happens there is a string of unresolved murders in the Cabrini-Green housing projects that, while dismissed by authorities, may actually be the work of the Candyman.

The story is an adaptation of the Clive Barker short story "The Forbidden" (collected in Books of Blood) about a vengeful ghost who kills to keep his story alive. The filmmakers added to Barker's original story, fleshing Candyman as the son of African slaves and murdered for an interracial affair in the 19th century. In his death, the Candyman was smeared with honey and fed alive to bees.

Little is known about the story of DaCosta's sequel, except that it will take place in the same continuity as the original and is set in the gentrified area formerly occupied by Cabrini-Green.

Who is starring in the new Candyman?

Last but certainly not least, Tony Todd will reprise his famous movie monster, Candyman, from the original 1992 movie. When news that Peele wanted to produce a sequel to Candyman, Todd expressed excitement to Nightmare on Film Street, saying quote: "I'd rather have him do it, someone with intelligence, who's going to be thoughtful and dig into the whole racial makeup of who Candyman is and why he existed in the first place."

Later in an interview with Entertainment Weekly, Todd said he hoped to appear in the film. "But it's Hollywood," he said, "I won't take it personally if for some reason it doesn't work out." When Mateen II was cast, it was assumed he would play the new Candyman, which prompted Todd to congratulate the actor on social media. Shortly afterward, DaCosta told Collider that Todd was not being replaced as Candyman.

Where can I watch the trailer for Candyman?

The first trailer for Candyman was released in February 2020, back when the movie was set to release later that year. You can check it out below.

Universal Pictures then released a second trailer in June 2021, a couple of months before the finalized release date.

Where can I watch the original Candyman?

If you've not yet experienced the horror of Candyman, you're in luck. As of this writing, the original Candyman is available to stream on Netflix.