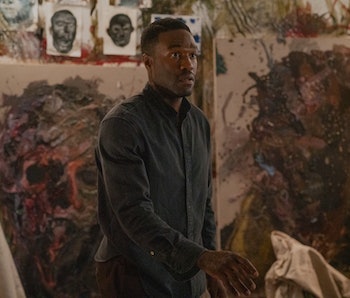 Say his name, say his name. The trailer for Candyman, a sequel to the 1992 film of the same name and directed by Nia DaCosta, brings back Chicago's most terrifying monster back to the big screen.

In the creepy new trailer for Candyman, an artist named Anthony McCoy (Yahya Abdul-Mateen II) investigates an urban myth about a ghostly apparition who appears in the mirror when his name is spoken five times. Although the people around Anthony dismiss his pursuit, a new rash of unexplainable murders begins in the rapidly gentrifying Cabrini-Green neighborhood where Chicago's public housing projects once stood.

Reminiscent of co-writer and producer Jordan Peele's 2019 hit Us, the trailer for Candyman takes an upbeat R&B hit and transforms it into something dark and terrifying. Where the Us trailer remixed Luniz's "I Got 5 on It," Candyman remixes Destiny Child monster single "Say My Name" and once again, the results are bone-chilling.

The rest of the film is just as fresh and exciting. In updating the concept for 2020, Candyman goes highly experimental with its monster's summoning, showing what happens when you try to summon Candyman as a group in broad daylight, or in a public place like an art gallery. It seems the Candyman won't just show up out of nowhere, but get you when you least expect it, and most vulnerable.

The full summary for the film from Universal Pictures and MGM can be found below:

For as long as residents can remember, the housing projects of Chicago’s Cabrini Green neighborhood were terrorized by a word-of-mouth ghost story about a supernatural killer with a hook for a hand, easily summoned by those daring to repeat his name five times into a mirror. In present day, a decade after the last of the Cabrini towers were torn down, visual artist Anthony McCoy (Yahya Abdul-Mateen II) and his girlfriend, gallery director Brianna Cartwright (Teyonah Parris), move into a luxury loft condo in Cabrini, now gentrified beyond recognition and inhabited by upwardly mobile millennials.

With Anthony’s painting career on the brink of stalling, a chance encounter with a Cabrini Green old-timer (Colman Domingo) exposes Anthony to the tragically horrific nature of the true story behind Candyman. Anxious to maintain his status in the Chicago art world, Anthony begins to explore these macabre details in his studio as fresh grist for paintings, unknowingly opening a door to a complex past that unravels his own sanity and unleashes a terrifyingly viral wave of violence that puts him on a collision course with destiny.

And here's the trailer:

Candyman opens in theaters on June 12.

More like this
Entertainment
5.10.2022 11:15 AM
5 years ago, Happy Death Day did one revolutionary thing no time-travel movie had done before
By Will Ashton
Entertainment
5.13.2022 1:30 PM
Christina Ricci says Yellowjackets fans will love her monstrous new thriller
By Dais Johnston
Entertainment
5.8.2022 12:00 PM
Doctor Strange 2 is the best-directed MCU movie ever — here’s why
By Alex Welch
Related Tags
Share: