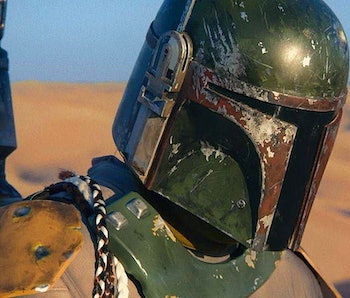 Boba Fett may take a different path. Prior to The Mandalorian''s first-season premiere on Disney+, fans speculated that Boba was the man beneath Mando’s armor and helmet. That didn't turn out to be the case, but now that the fan-favorite character is definitely back in action, a new production leak suggests his spinoff series will have differ from The Mandalorian in one crucial way.

Production Weekly has added the untitled Boba Fett spinoff to its list of shows in production, indicating that the latest Disney+ series will begin filming very soon. This aligns with a previous report that suggested the series would start production later this month or in December — that's before The Mandalorian Season 3.

The series will film under the working title “Buccaneer.” The word immediately brings to mind a swashbuckling pirate, a far cry from the star-hopping exploits of Din Djarin. While the origin of the word became synonymous with 17th century Spanish marauders who sailed the Mediterranean, the word is also used to describe someone who is “a daring, adventurous, and sometimes reckless person.”

In October, DisInsider’s Skyler Shuler suggested Buccaneer was the working title of The Mandalorian Season 3, which had been expected to begin filming this month. However, that no longer seems to be the case. It's possible Disney and Lucasfilm pulled a switcheroo for each series’ production start date.

Of course, working titles don’t always offer any obvious clues or connections to the plot. In the case of Star Wars, however, everything's open to speculation about what it could mean for the future of the franchise. For instance, The Mandalorian’s working title for Season 1 was “Huckleberry,” which fans believed to have been a nod to the 1993 western film Tombstone.

In that vein, Buccaneer could very well be an inkling of what we can expect from the Boba Fett series. It’s possible that the series is set in the immediate aftermath of Boba’s epic oopsie in Return of the Jedi. Thanks to The Mandalorian, we know that Boba survived the Sarlacc Pit, but somehow lost his (now damaged) armor at some point afterwards.

The armor has always been important to the Mandalorians’ identities and there’s a chance that the bounty hunter, with no other choice sans armor, will give up his job to become a daring, reckless adventurer after these events. Maybe the series will even center Boba Fett's revenge against Han Solo (though that's less likely).

Conversely, the Boba Fett series could take place after The Mandalorian Season 2. After all, we don’t know if the bounty hunter will appear again before the end of the season, but it’s possible that he won’t want his armor back regardless of Mando saving it for him. These decisions to potentially abandon his bounty hunting days could lead the Boba Fett series away from the western front and into a more adventure-focused format. The Mandalorian broke away from the mold by setting its own path and the Boba Fett spinoff could do the same, paving the way for the Star Wars shows to explore a variety of different genres while existing in the same universe.

The Boba Fett spinoff does not yet have a release date.