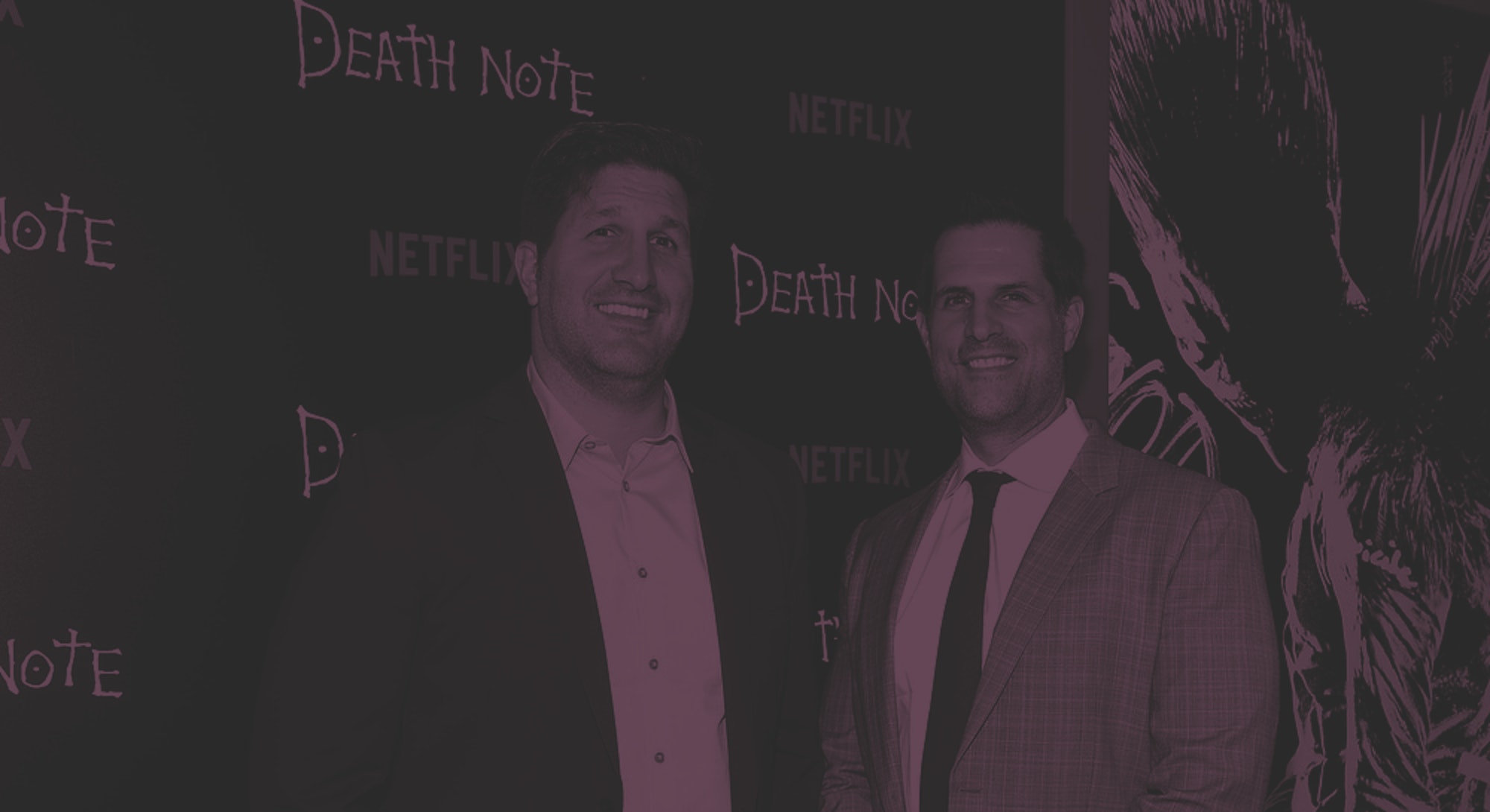 For most people in a movie theater, the credits are the universal cue to file out and hopefully beat traffic.

But when brothers Vlas and Charley Parlapanides grew up watching matinees at the Jersey Shore, they stayed behind and read the credits carefully. Every time, they were looking for a reflection of themselves.

With an estimated 2.5 million people, “Greek Americans are a very small population,” Charley, the younger of the two brothers, tells Inverse. “We would watch the credits just to see any Greek name. Any time we see anything that has that Greek element, it makes us proud.”

The two didn’t need to look far for representation. The gods of Mount Olympus — Zeus, Poseidon, Ares, Athena, and more — have a permanent place in academia and mass culture. (One example of many: The name of NASA’s spaceflight program, Project Apollo.) Years after learning about the gods from their grandmother, the Parlapanides Brothers have taken their people’s myths to Netflix in the new anime Blood of Zeus, an eight-episode epic they oversee as showrunners and writers.

But it wasn't just cultural representation the Parlapanides yearned for, it was authenticity. A respect for their people’s shared universe was, more often than not, lacking in Hollywood versions of the Greek stories.

“Those original stories have stood the test of time, for thousands of years. And they get reinterpreted,” Vlas says. “What happens with popular culture is that it develops its own sense of what [the stories] are like.”

It’s not that they take umbrage with Clash of the Titans and Wonder Woman. The brothers are proud Greeks and geeks, spending their childhoods reading comic books and dropping quarters on Gauntlet at the Seaside Heights boardwalk. They were also obsessed with a new thing from Japan called anime, discovered on VHS tapes borrowed from a neighbor. (Ninja Scroll, Street Fighter, and Starblazers remain favorites.) As adults, they’ve played video games like God of War and the new indie hit, Hades.

The Parlapanides dig it all. They just knew they could do better. “Marvel and DC, truthfully, it's just Greek mythology with costumes,” Vlas says. “We're just taking it back.”

Streaming now on Netflix, Blood of Zeus is a bloody gorgeous anime exclusive to the platform as part of a larger $8 billion commitment made in 2017. Animated by Texas studio Powerhouse, (Castlevania and Kevin Smith’s upcoming He-Man), Blood of Zeus is an operatic tale about a human peasant, Heron, who learns he’s the son of Zeus. (Who isn’t in these tales?) When half-demon Seraphim shows up, it opens old wounds and reignites a war between the Immortals of Olympus and the ancient Giants.

What makes Blood of Zeus stand out, especially as a Japanese-influenced anime, is its straightforward premise. In this version of the myth, the gods are godly, the monsters are monstrous, the gore is gory. It’s a classic take on Greek mythology, and yet, it feels new. When a familiar story has been remixed into every other genres from space operas to sitcoms, it’s a thing to behold when the epics are presented as just that: epics.

“We've pitched every iteration of Greek mythology possible,” Charley says. “And when you pitch executives the traditional, tried and true story, their eyes glaze over. Oh, we’ve seen this a thousand times.”

So the two came up with a story of their own. “What we had to do is frame it as this last story in Greek mythology. We get past the gatekeepers by saying, ‘This is a story you don't know.’”

At the top of the show, Blood of Zeus is declared in bold text a story “lost” in oral history. “Many of them were never transcribed,” Vlas reasons. “So we thought, maybe some were lost. The question we asked was, ‘What if this were one of those tales?’ That intrigued us. We could take the artistic liberty and tell the story we wanted to tell.”

He adds, “It was oral tradition. There isn’t a definitive version.”

The Parlapanides Brothers’ second-generation immigrant upbringing guilted them into studying anything but the arts in college. “We were both econ majors,” Vlas says. “A lot of immigrant families have that sense of doing better than what your parents were able to. But writing is the one discipline where if you write something that people like, they don't care where you went to school or who you know. We realized we can write our way in.”

The two don’t yet have a long filmography on IMDb. Their first major credit is the 2011 movie Immortals starring Henry Cavill, a script born out of the brothers being shut out of another major project they desperately wanted in on: The 2010 remake of Clash of the Titans.

“We found out in 2007 they were going to remake Clash of the Titans,” Charley says. “We told our agent, ‘That’s one of our favorite films. We love Greek mythology. Please put us up for this job.’” They were denied on the basis of lacking a suitable sample script. “We couldn’t even get a meeting.”

"Writing is the one discipline ... they don't care where you went to school or who you know."

The script that got the Parlapanides into Hollywood was a car heist film titled Live Bet. With 50 Cent in the cast, Live Bet was ready to hit the gas until Vin Diesel and Paul Walker agreed to do one more Fast & Furious. “We were gonna be the new Universal car franchise,” Charley says.

“We got put on the backburner. It became, ‘Let’s see what happens after Fast 4.’ Then it was after Fast Five. The rest is history.” (The brothers say there’s no hard feelings as they’re friendly with Fast & Furious producer Chris Morgan.)

With Live Bet sent to the scrap heap, the brothers tapped into their passion for myths and their Greek identities to write Immortals “on spec,” meaning it was written by their own volition just to prove they could write these kinds of movies.

“I was furious,” Vlas remembers post-Clash. “I'm like, we know Greek mythology. We decided to write Immortals just to have a sample in world-building.” The script was sold to Relativity Media and was released as a movie in 2011. It grossed over $226 million worldwide.

A few years later they wrote Death Note, the American remake of the popular Japanese anime/manga about a teenage serial killer and a demonic notebook. A combination of that and “having a relationship” with John Derdarian, Netflix’s Director of Japan & Anime — whom they met after being shut out of another major project — led to Blood of Zeus.

“This is the story we’ve always wanted to tell,” Vlas says.

An early iteration of Blood of Zeus was an anthology show, a sort of American Horror Story for Greek myth. But the show evolved when Derdarian, seeking something Netflix could adapt as an anime, took an interest in what the brothers plotted for “Season 4” of their anthology. After the two sent him a pilot script and a ten-page outline, Derdarian committed.

As an anime, Blood of Zeus stands out for using western film language over conventional Japanese anime framing and pacing. The brothers respect anime as a Japanese art form — “They’re still the gold standard,” Vlas says — but they recognize what the emerging scene of American anime offers over their Japanese counterparts.

“Our generation grew up loving Japanese anime. Now is our chance to step into that arena and tell stories from our point of view,” Vlas says. “There are sensibility differences. One thing we’re doing is making Blood of Zeus as cinematic as possible. It's like a movie within the anime space.”

This is film nerd territory, but there’s a distinction in the visual language of American anime that separates Blood of Zeus from Attack on Titan. “I love in anime those static shots, like it’s a beautiful drawing and you’re panning as someone speaks,” Vlas says, “but in our show, it’s more of a western cinematic language where you’re looking at reaction shots, not just static shots. In Japanese anime you could pause and look at the frame and it’s beautiful. Our show is more about capturing moments, so you might not get those beautiful frames.”

Just as Greek scholars may not dig the show’s liberties, the brothers know anime purists may thumb their noses at Blood of Zeus.

“I don’t disagree,” Charley says, “but we do love the genre. We’ve been watching Japanese anime forever.”

After years of searching for Greek names in the credits of their favorite movies and shows, the Parlapanides can finally see their own on the screen.

“We always felt like outsiders,” Vlas says. "We were the kids that brought spanakopita to lunch. And people were like, ‘That stinks, what is that?’ We felt we were just a bit different, and we wanted to imbue that in the show.”

“We just wanted to tell a story that we felt stayed true to what made Greek mythology so great,” Charley says. No need for sci-fi or high school settings here.

“For me, what makes those stories great is the sword and sandal element. I don’t agree with the supposition that these stories have been told before and they’re done. The Greek gods have been around for three thousand years. People are still telling these stories. There’s something inherently true about them.”

Blood of Zeus is streaming now on Netflix.