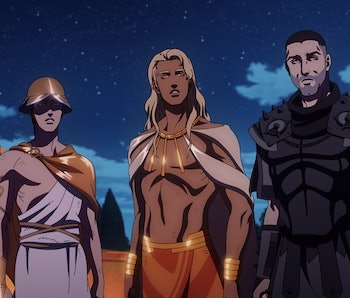 Blood will spill once more. Season 2 of Netflix's autumn anime hit Blood of Zeus is officially underway. While details about the continuation of Heron's story are sparse, we may already know what the future holds for the series.

Here's everything we know so far about Blood of Zeus Season 2 on Netflix, from the possible plot to when it may arrive.

When will the Blood of Zeus Season 2 be released?

A firm release date for Blood of Zeus Season 2 is not yet known. The ongoing Covid-19 pandemic has made production and premieres challenging to predict.

The animation industry at large has navigated the pandemic more nimbly than live-action movies and TV shows. However, there are still complications and roadblocks that can change production on a whim.

Is there a Blood of Zeus Season 2 trailer?

There is no trailer for Blood of Zeus Season 2. On Netflix's sci-fi and fantasy Twitter, @NXonNetflix, the account shared an announcement teaser that reused footage from Season 1 to confirm production of Season 2. You can watch the teaser here. An actual trailer will likely arrive shortly before Season 2.

What is the plot of Blood of Zeus Season 2?

Warning: Spoilers for Blood of Zeus Season 1 ahead.

The Parlapanides Brothers said that the introduction of Hades is "a big set-up" for Season 2.

"Fundamentally, Season 1 is about Heron and Seraphim, and their stories continue in Season 2," Charley Parlapanides said. "But we have a 20-page outline for Season 2, and it's very much a story of Zeus, Hades, and Poseidon. The three brothers." He further teases there are "things that happened in Season 1 that are really set-ups for Season 2. We go back to the story of when the brothers divided the three realms of the world."

At the time of the interview, Blood of Zeus was not yet greenlit for another season. But the brothers have mapped out five seasons of a story. "We've planned out what we would hope to be a five-season arc," Charley said.

Who created Blood of Zeus on Netflix?

The show is the creation of producers Vlas and Charley Parlapanides, two Greek-American brothers and screenwriters in Hollywood. After being shut out of their dream project, the 2010 remake of Clash of the Titans, the two wrote the script that would become the 2011 movie Immortals starring Henry Cavill. They eventually made their way to Netflix, where they pitched Blood of Zeus as an anthology series before retooling it to become the untold story of a Greek hero, Heron, and his journey as the son of Zeus.

To learn more about the creators of Blood of Zeus, check out our interview with the Parlapanides Brothers here.

Blood of Zeus Season 1 is currently streaming on Netflix.

This article was originally published on Dec. 8, 2020