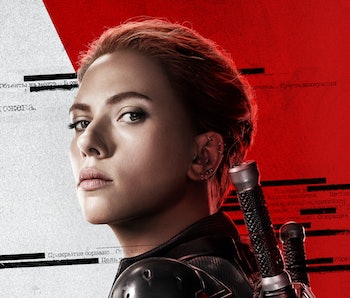 With the coronavirus pandemic heavily impacting the film industry, Disney and Marvel have pulled the release date for Black Widow. The film was scheduled to hit theaters on May 1, but that’s no longer happening. However, the film’s postponement leaves a lot more time to speculate over the plot.

The final Black Widow trailer dropped just last week, even though it feels like a century ago. It hinted that a face/off would be happening between Yelena Belenova and Natasha Romanoff. However, a closer analysis of the very same trailer screenshot seems to suggest an Iron Man villain will return.

Speculative spoilers ahead for Black Widow.

While Tony Stark/Iron Man met his demise in Avengers: Endgame, the lingering effects of Stark Industries tech — along with those who have abused its power or have felt wronged by Tony — have remained a continuous plot thread throughout the Marvel Cinematic Universe. Former Stark employees have gone on to become major villains in MCU films, including Spider-Man: Homecoming’s Mysterio.

Reddit user marvelism theorizes that another of Iron Man’s enemies will be reemerging in Black Widow. When zooming in on the trailer screencap of Yelena strapped to a surgical gurney, don't focus on the scar around her face. Instead, focus on the sign behind her.

It indicates the surgical equipment belongs to A.I.M., and the theorist argues this means the scientific research and development agency will return in the film.

For some background, A.I.M. stands for Advanced Idea Mechanics. It was founded by Aldrich Killian, aka the villain Mandarin from Iron Man 3. Killian wanted to create advanced soldiers under the Extremis program. His hopes were to profit on the business of terror before going after revenge on Tony Stark for snubbing his research in the past.

At this stage, it’s hard to say how Killian’s organization might tie into the plot of Black Widow, or if A.I.M.’s presence is simply a well-placed Easter egg. After all, Killian died at the end of Iron Man 3. Unless the MCU has plans to resurrect him, it’s not all that likely that he will show up. However, Killian’s company was creating nanotechnology that could heal people and regenerate any of their limbs and other enhancements, which makes the whole death thing less of an issue.

The screenshot of Yelena suggests she's being experimented on under Killian’s Extremis program. Notice that the outfit she wears is the same one she’s wearing to fight in the Black Widow trailer. Perhaps Yelena is injured and A.I.M. has provided nanotech to heal her and enhance her physical capabilities.

What’s more, it’s possible that Killian or someone else at A.I.M. is working alongside Taskmaster to create physically enhanced spies and assassins in the Red Room, the training school where Black Widow learned her skills. Killian was all about covering up his work by working behind terrorist organizations and the same could be happening here. There’s a high chance that Yelena is being experimented on in the scene. If A.I.M. is indeed involved, then she’s in more trouble than we thought.